United Medical Center’s mobile medical van parked outside the Greenleaf public housing complex in Southwest D.C. Jenny Gathright/WAMU hide caption toggle caption Jenny Gathright/WAMU Carl Goggins feels like he can’t be careful enough when it comes to the coronavirus. Apart from the danger the virus poses to him as a […] 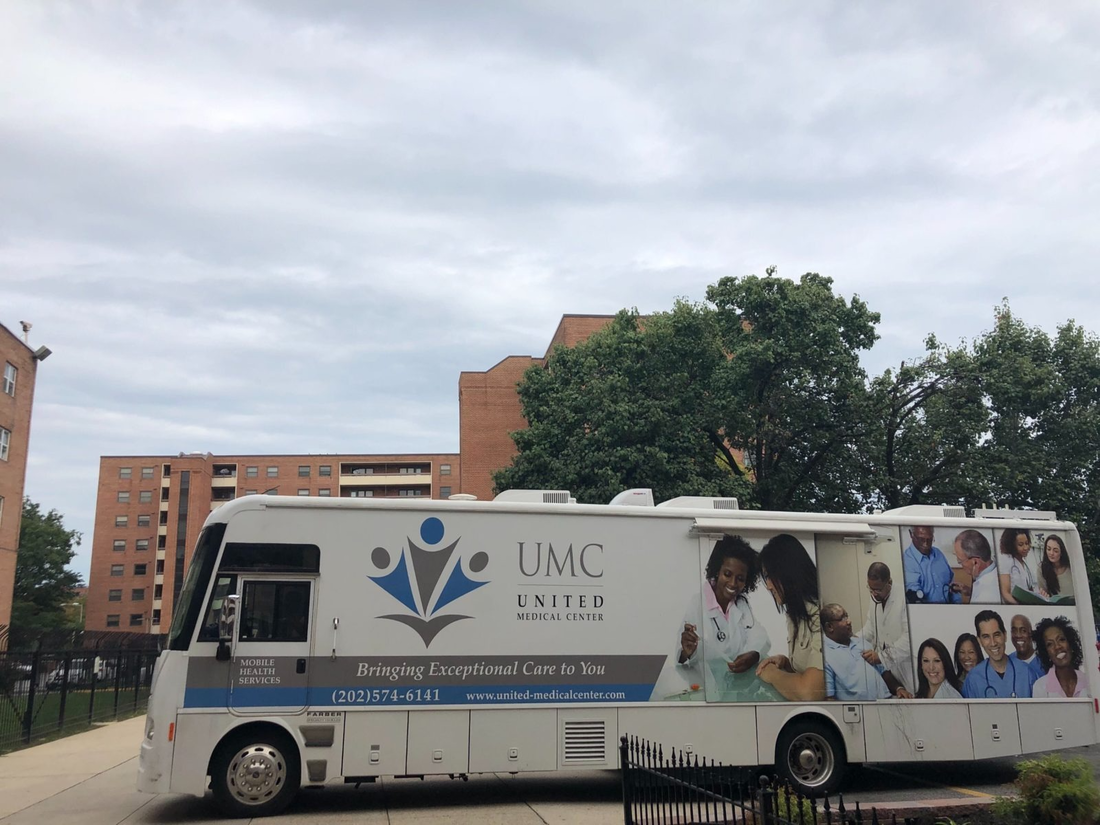 Carl Goggins feels like he can’t be careful enough when it comes to the coronavirus. Apart from the danger the virus poses to him as a 67-year-old, he worries what would happen if he fell ill.

“I live by myself,” said Goggins. “Ain’t nobody gonna come to the door.”

So when a mobile medical van offering coronavirus testing arrived in the parking lot of Greenleaf Gardens, the public housing complex where Goggins lives in Southeast D.C., he jumped at the opportunity to get a test, even though he’s had several this summer and he didn’t currently have any COVID-19 symptoms.

The van is part of a new project led by the D.C. Housing Authority in collaboration with area hospitals. It’s meant to make coronavirus testing more accessible to residents of public housing, and, eventually, connect residents with stable access to medical care as the disruptions from the pandemic continue.

In the Spring, when coronavirus cases were surging in the District, the messaging from the city was clear: Stay home. Many primary care clinics converted almost completely to telehealth. The Housing Authority closed its community rooms and shut down many activities. But now, city agencies are recognizing that they need to safely provide more face-to-face services for residents.

“We’re hopeful that … we can continue to bring online more services to help meet these needs,” said Jose Sousa, a spokesperson for the Housing Authority.

The goal is for vans to visit several public housing complexes, including Greenleaf in Ward 6 and Benning Terrace in Ward 7, once every 6 to 8 weeks. The Housing Authority will also kick off a partnership with Howard University to embed medical services at its properties in Ward 1.

The Housing Authority says it also wants to experiment with providing services like education and workforce development in a safe and socially distant way. At Greenleaf, the nonprofit Good Projects set up a room to help students with distance learning. They set up WiFi hotspots and socially distanced desks, offered breakfast and lunch and supervised students to make sure they were paying attention to their lessons.

“I don’t think anyone has a magic wand of how to combat and deal with what we’re all facing,” said Tyrone Garrett, the Executive Director of the Housing Authority. “So this is going to be, you know, a trial by error type of situation where we’re going to try something. If it works for us — great. If it does not, we’ll go back to the drawing board to ensure that our residents are taken care of.”

Kathy Williams, a Greenleaf resident, saw the medical van outside while she was on her way to a different doctor’s appointment. She said the opportunity was so convenient that she had to stop to get tested.

“I want to know, because I have a sick elderly mother and I go out and visit her, and I have to be in good health myself,” Williams said. “I could not pass this up.”

Dr. Erin Athey, a nurse practitioner at United Medical Center (UMC) and a professor at George Washington University’s nursing school, said many residents who came to the van on its first day at Greenleaf were, like Williams, there to get tested and ask about the coronavirus — and many did not have accurate information about the pandemic.

“I think the biggest thing that I’ve noticed is just the … misinformation about the coronavirus. I think that’s what’s first and foremost on people’s minds,” said Athey, who helped to create the partnership with the Housing Authority and was onsite administering tests, consulting with residents, and supervising nursing students who were providing care.

Another big concern for residents was about how to access the doctor safely during the pandemic.

“I think a lot of people are afraid to come out,” Athey said, noting that while doctor’s offices have taken precautions and have offered telehealth, it’s still not clear if everyone is comfortable with those options.

So Athey sees the van as a “bridge” between residents and their other health care providers. Athey said the van is also a way to correct for the fact that primary care at UMC has historically been difficult to access.

“We have high no-show rates. It’s often inconvenient for people to come in for appointments,” said Athey. “So I think using this as a convenient way to access health care could definitely be a future model for people, especially living in public housing.”

Critics have said that in general, the city did not do enough to proactively protect Black residents living in the city’s poorest neighborhoods in the early days of the pandemic, adding to already inadequate health infrastructure. At first, the city opened up just one public testing site east of the Anacostia river, at UMC, which is at the edge of the city along the Maryland border. The city later replaced that site with one in Anacostia, and a Howard University clinic on Benning Rd started offering testing in Ward 7 in May.

Additionally, systemic racism has made Black residents in D.C. more unhealthy on average than white residents, and significantly more likely to suffer from underlying conditions that make it harder to recover from COVID-19. During the pandemic, the combined result of these factors has been devastating: 75% of those who have died from COVID-19 in the District have been Black. More residents have died in Ward 8, which is 92% Black, than in any other ward in the city.

The D.C. Housing Authority declined to provide data on how many residents of public housing have contracted COVID-19. More than 90% of D.C.’s public housing residents are Black, and the average annual income for a family living in D.C. public housing is $15,000.

Dr. Lisa Fitzpatrick, the founder and CEO of the organization Grapevine Health, thinks D.C.’s significant health disparities are driven by problems with communication: people not getting accurate health information from sources they trust, or being disconnected from health care providers.

“We have a lot of health care resources. We have very high insurance coverage rates. We have lots of community health centers and clinics. We have lots of doctors and hospitals,” said Fitzpatrick, who was also the former Chief Medical Officer for D.C.’s Medicaid Program. But, she said, “We have an engagement problem in this city.”

Fitzpatrick was also in front of the van speaking with Greenleaf residents. She started Grapevine Health as an effort to provide culturally competent health information, particularly in communities of color.

“People are disconnected from health care for a variety of reasons, so I think that the city can think about ways to improve the engagement,” Fitzpatrick said. “As for me, this is my role: Being a Black doctor who shows up in the community to let people know that there are trusted messengers out here, we want to hear your questions, we want to help you understand what to do.”

Alton Majette, a Greenleaf resident, said he hears from a lot of neighbors who are afraid to go to the doctor, or who shy away from health care out of fear.

“People are just kind of scared they’re going to hear something that’s wrong with them and they don’t want to hear it,” said Majette.

Majette, on the other hand, wants to know everything. He wants frequent coronavirus tests, so that he can confidently attend church services. He says he has taken charge of his health in recent years, and he has lost about 100 pounds by eating healthy and taking daily walks around Greenleaf. He walks even when it hurts; His diabetes has caused nerve damage and he suffers from gout. He applauded the arrival of the van, because he likes seeing the city do more, particularly for elderly residents.

“You’ve got a lot of people that retire and I don’t think some of them get the benefits that they should get — the retired people and the aging people,” said Majette. “I think it’s good that the mobile can come to you like that in the neighborhood.”