Introduction Adairs is a leading Australian company specializing in furniture and home décor products. It uses an omnichannel business model with physical and online stores and a high design and quality component. Adairs sells its products under two brands, Adairs and Mocka, totally independent of each other with the first […]

Adairs is a leading Australian company specializing in furniture and home décor products. It uses an omnichannel business model with physical and online stores and a high design and quality component. Adairs sells its products under two brands, Adairs and Mocka, totally independent of each other with the first being multi-channel and the second only online.

Adairs opened its first store in Victoria in 1918. Later, it was established as a small department store retailing curtains, womenswear and haberdashery until 1980. In 1981, it opened the first Adairs boutique, resulting in total success. It followed the opening of another four stores. Over the next two decades, it expanded its retail presence throughout Australia. In November 2007, the MacLean family sold its majority stake to BBRC. In December 2010, the Catalyst venture capital fund acquired a 69.5% stake, and today it represents less than 12% of the outstanding shares. 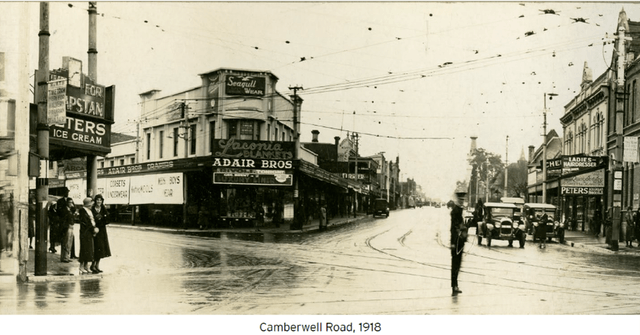 In June 2015, Adairs went public on the Australian stock exchange at AUD2.40. Since its IPO, the current stock price is only +38% above the IPO price, so with exceptional operating performance; therefore, we detect a great investment opportunity.

There is no doubt that COVID-19 has changed our perception of the home. Today, people concentrate on interior design. More time inside our houses makes us re-evaluate our living spaces, how they work, and how they make us feel.

According to Euromonitor International, TAM for the home furnishings segment in Australia reached AUD14bn in 2019. If we exclude those segments where Adairs does not operate (mattresses, barbecues, blinds, and curtains), the figure drops to AUD12bn. In 2020, ADH had a turnover of AUD 390m; therefore, the market share is slightly below 3%, and it is easily scalable.

Adairs had 167 physical stores in Australia and New Zealand in 2020. Before COVID-19, it expected to open between six and ten stores per year, but this goal has been reduced to between three and five stores thanks to the online channel’s growth. 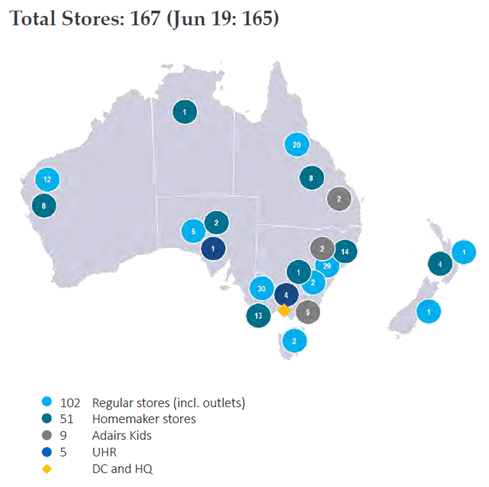 Adairs and Adairs Homemaker stores are the core of brick-and-mortar stores, while Adairs Kids and UHR are pop-up store formats.

Figure 3: Format of physical stores of the Adairs group

Adairs product offering segments into two main areas: Basic products and fashion and decoration. Commodity categories include simple and complete bedding and items such as towels. These products’ primary function is to satisfy its customers’ needs with quality products and added value. During the last 10 years, the company has developed another range of contemporary and trendy fashion products. Adairs presents new models weekly in physical stores, thus ensuring its capacity for innovation and greater frequency of purchases by the consumer.

During the last five years, the online channel has grown at a CAGR of +38%, representing 24.5% of total sales in 2020. The online channel will continue to be fundamental for the future growth of Adairs, mainly thanks to Mocka’s recent acquisition.

When we invest in a retail company, we like to do it where its percentage of its own design is high. Own brands represent 90% of total sales, and the remaining 10% comes from third national and independent brands. This transformation has allowed it to increase the group’s consolidated operating margin substantially.

Adairs does not directly manufacture the products it sells but instead outsources its manufacturing process to different local suppliers. It is a low capital-intensive business model. We like it because it allows you to increase the return on invested capital (ROIC). The comparison of ROIC versus its competition shows Adairs’ advantage. Adairs reached 16% in 2020 vs. 10% or less of its peers. Our future projection indicates that Adairs could achieve a ROIC of over 20% in 2023.

COVID-19 has accelerated the penetration of the online channel, both in Adairs and Mocka. It has caused a reduction in the expansion plan in physical stores to favor online. Although e-commerce works better in some categories than in others, ADH has shown that in segments such as furniture and home decoration, it is possible to increase the online market share in tandem with a multi-channel strategy. According to Statista, in 2023, the penetration rate of online furniture trade will still be 11% in Australia, indicating a great potential for growth in this segment.

In December 2019, Adairs acquired Mocka, a company that only operates in the online segment and increases growth in this channel. During the last fiscal year 2020, the Mocka website received 880,000 visits. It reached a customer base of 185,000 with more than 450,000 e-mail subscriptions. Being exclusively an online channel, Mocka’s operating margin doubles that of Adairs’. It has been accretive from the first year and improves the consolidated margin of the Adairs group.

The Linen Lover membership program brings together 800,000 members and has grown at a CAGR of + 14% over the past three years. Thus, Adairs receives better feedback from each of its customers, personalizing its product offering. Membership is not free. The customer must pay for it, thus reinforcing the value proposition and increasing deferred revenue (15% of sales). 75% of current sales are through customers who are members of the member club.

Much of the improvement in the operating margin will come from the transformation to larger stores. Most of the stores are Adairs regular (99 stores), with an average revenue per store (ARS) of between $1m and $3m and 150-250 square meters. The management aims to grow at Adairs Homemaker (49 stores) because the ARS is $2.5m to $4.5m. It has 450 to 1,000 square meters. If we look at the contribution margin (sales – variable costs) in Adairs Homemaker, it is 30% vs. 10%-20% on regular Adairs. The medium-term goal is to reach an ARS of $2.5m, the low range achieved by Homemaker stores.

Throughout 2019, Adairs suffered cost increases and problems with its distribution network and could not support its strong growth, especially in the online segment. To alleviate this situation, in February last year, Adairs reached an agreement for DHL to operate its new NDC logistics center, which will be operational in July 2021. Thanks to this Agreement, we estimate specific improvements at the opex and circulating level for the next years.

9. The track record since its IPO.

The last fiscal year (2020) has been spectacular, even considering that the stores were closed during April and May. Aggregate LFL of +3.9% and strong growth of the online segment of +110.5% (includes consolidation of Mocka), representing 35% of the total. Margins have also improved thanks to operational efficiency and the more significant weight of the online segment. Finally, earnings and earnings per share have grown to high double digits. Given the low visibility due to COVID-19, Adairs chose to be conservative and reduce the dividend during year 2020. 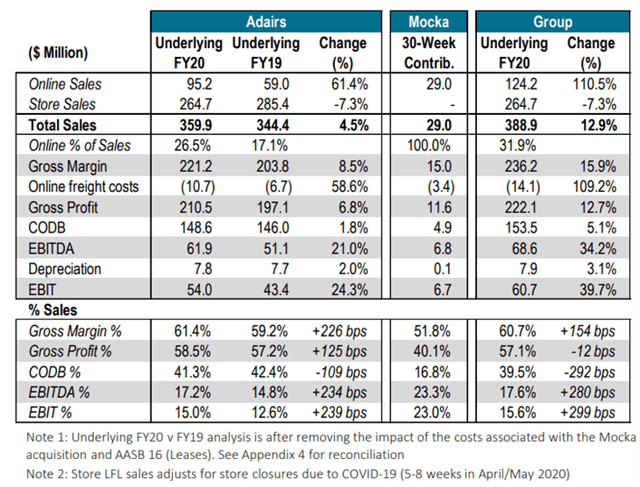 Mark Ronan has been the CEO of the company since November 2016. However, he comes from internal positions, all of them with responsibility in recent years. Base salary is less than 50%, with a fixed salary of $550,000 and a total remuneration of $1m. Total compensation represents less than 0.25% of the market capitalization, which is always a good sign. The employees and members of the board of directors control 6.5% of the total outstanding shares. Mark holds 0.5%, a figure that seems sufficient to have “skin in the game.”

Things To Take A Detailed Look

1. Goodwill and other intangibles

In December 2019, Adairs completed the acquisition of Mocka for a total amount of $85m. It is distributed as follows: 1) $46.5m in cash, 2) $5.75m in Adairs shares, and a contingent provision (earn-out) of $32.3m spread over the next three years based on pre-tax profit targets. The earn-out computes under level 3 accounting assumptions; therefore, there can always be some subjectivity in its calculation. This operation raised goodwill of $48.40m, which represents 56% of the transaction’s value, and it is necessary to analyze in detail. 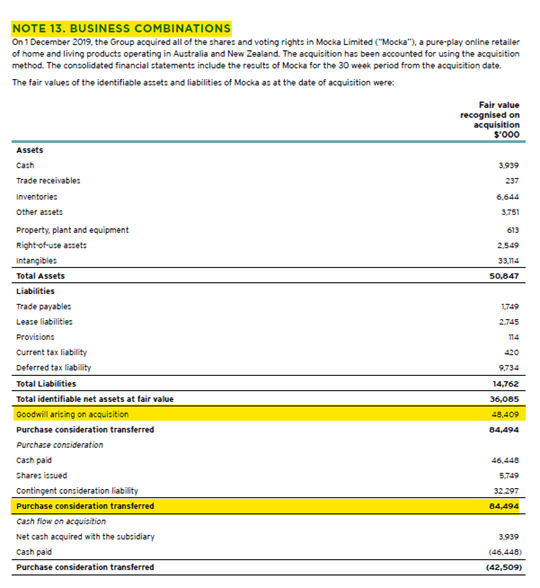 Mocka’s goodwill represents 35% of the total intangibles on the balance sheet, and although it is not a high amount, it is an amount to monitor. We must analyze which estimates Adairs has assumed for its calculation and its future evolution to rule out any possibility of future impairment.

In figure 6, we observe the hypotheses used to calculate goodwill in the purchase of Mocka. They seem reasonable to us insofar as they are very conservative figures for a business in the online channel that is growing very strongly and expects to follow it. 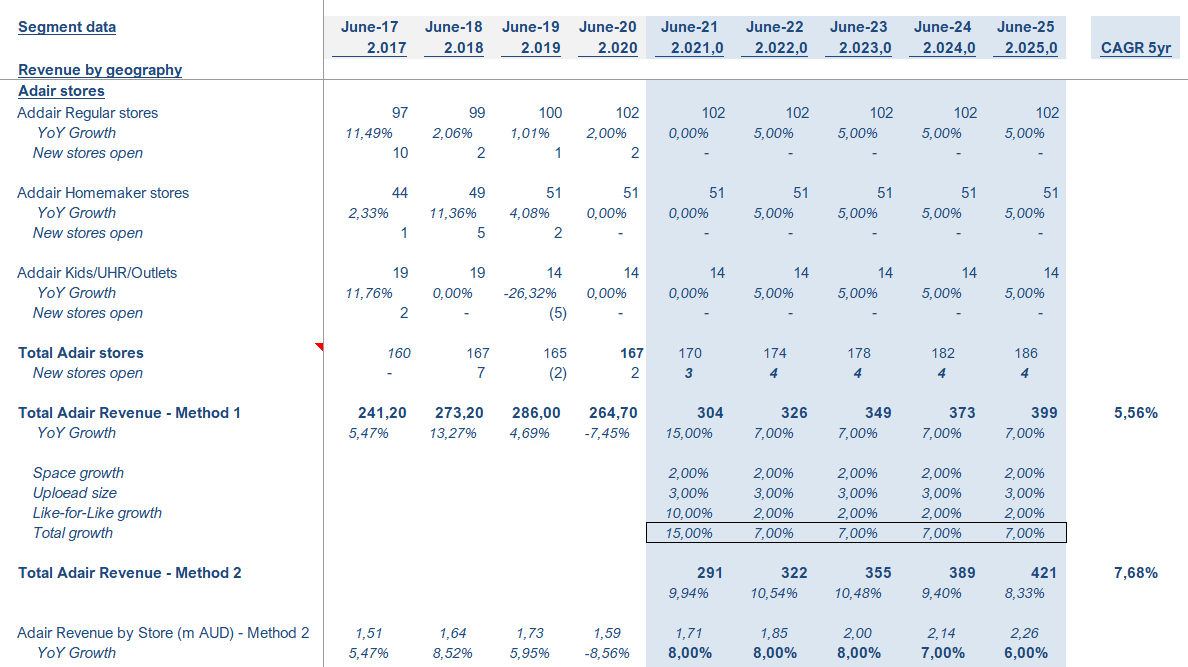 With the end of quarantines and vaccines’ arrival, the online channel’s growth rate will be moderate in the coming years. However, in 2021, it will continue to be abnormally high. At the end of 2020, the online segment represented 24.5% of total sales, and we expect it to grow to 37% in 2023. We estimate total online sales (Adairs + Mocka) of $205m to 2023, thanks to low-double-digit growth and Mocka’s consolidation since 2020.

During the first five weeks of 2021, the online segment has continued to grow above +100% due to the partial closure of stores in Melbourne. During the same period, Mocka has grown at +48%. We expect it to continue growing very strongly, especially in Australia, where its market share is minimal compared to New Zealand.

The combination of operational improvements and the online segment increase will keep gross and operating margins at high levels. We estimate that the cost of sales as % of sales will remain at 39% in 2021, but will rise to 41% in 2023. In SG&A as % of sales, we expect to stay at 30% in the medium term. We estimate an average gross margin of 58% and an operating margin (EBIT margin) of 17% for 2021, which moderates 2022 and accelerates again from 2023.

Net profit should be above $60m in 2023, representing an EPS of $ 0.36. The analysts’ consensus is well below our estimates, but we expect them to revise their estimates upwards.

To calculate the free cash flow, we estimate the following: 1) Improvement in inventory days, from 95 days in 2021 to 90 days in 2025, 2) +10% growth in deferred income due to an increase in the number of Linen Lovers members.

4) We adjusted for the increase in capital leases due to the accounting change related to IAS 16 ($30m).

ADH indicates that the payout (percentage of profit paid in dividends) will range between 65% and 80%. In our calculation, we estimate 65%.

We apply a multiple of 15x to the estimated profit or cash flow and adjust for the net debt position (includes earn-out of $ 33m). In that case, we reach a target value of $5.45, which represents a potential upside in three years of +70% or an IRR of 19%.

Adairs is Australia’s leading, well-managed home furnishing and home décor company benefiting from the COVID-19 change in home-related habits. Adairs has multiple opportunities for future growth, such as expanding new space, like-for-like growth, upsizing to larger and more profitable stores, penetration of the online segment via Adairs online and Mocka, good capital allocation, and a strong balance sheet. Applying a P/E of 15x, we reached a target value of $5.45 or a potential upside of +70% with an IRR of +19%. 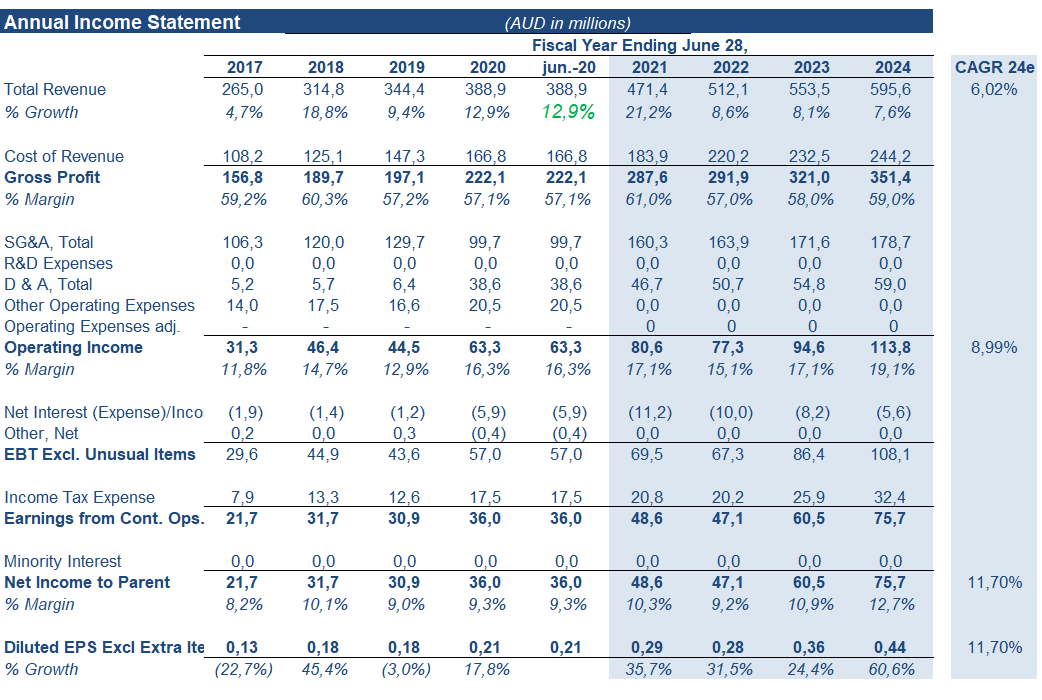 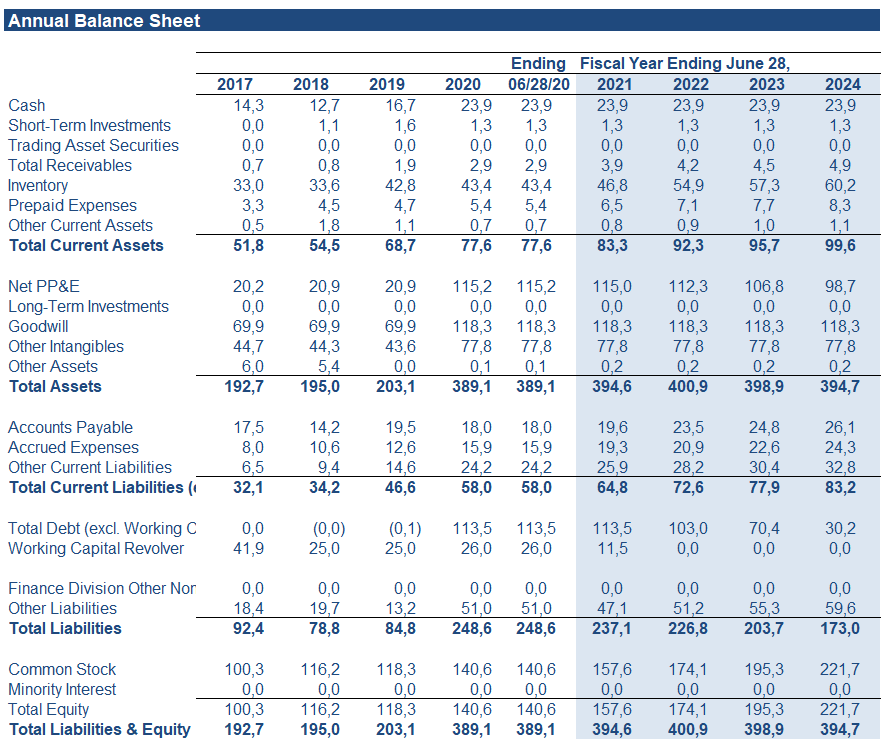 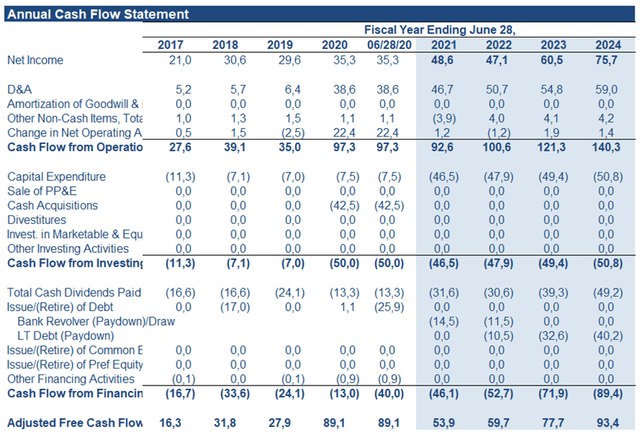 Disclosure: I am/we are long ADAIRS LIMITED. I wrote this article myself, and it expresses my own opinions. I am not receiving compensation for it. I have no business relationship with any company whose stock is mentioned in this article.

Additional disclosure: Disclaimer: As of the date of publication of this report, DRACO GLOBAL, SICAV, SA (“DRACO GLOBAL”), has a long position in Adairs Limited (“ADH”). DRACO GLOBAL may profit from the increase in ADH’s share price.

After the publication of this report, DRACO GLOBAL may carry out share purchase/sale operations in ADH.

All opinions expressed here are subject to change without notice. DRACO GLOBAL does not undertake to update this report or any information contained therein.