Ai Weiwei: ‘Any artwork, if it’s relevant, is political’

TOKYO — As the Chinese Communist Party celebrates its 100th anniversary this year, one of Beijing’s most outspoken critics will publish a personal history that also spans a century. Dissident artist Ai Weiwei will release his yet untitled autobiography — written in Chinese and translated into about a dozen languages […]

TOKYO — As the Chinese Communist Party celebrates its 100th anniversary this year, one of Beijing’s most outspoken critics will publish a personal history that also spans a century.

Dissident artist Ai Weiwei will release his yet untitled autobiography — written in Chinese and translated into about a dozen languages — toward the end of the year. The book starts with his father’s birth and ends with that of his youngest son.

His father, Ai Qing, was a renowned poet who also got up the nose of the authorities. Born in 1910 in eastern China’s Zhejiang Province, the elder Ai was accused of “rightism” by the Communists and banished in 1959 to the western region of Xinjiang, where he suffered the indignity of cleaning public toilets for five years. His son, Ai Lao, just turned 12 and is at school in the U.K.

“The book will record 100 years of China’s intellectual struggle,” Ai told Nikkei Asia in an online interview from his home in Lisbon.

After the self-professed “nomad” spent periods of exile in the U.S. — before a return to China — and then Germany and England, the 63-year-old artist moved to the Portuguese capital for the warm climate and proximity to the ocean. “The time left to me is not that long,” he said in fluent English. Ai Weiwei: “I’m a very selfish person. I have to do these works to find out the ultimate question — who am I?”

He plans to build a studio there as “it will force me to spend some time here, because in my life I have to set up obstacles to force myself into situations.”

He was vague on whether he would ever return to China.

“I really think I have the total right to go safely back to my own country for my mom, who is 88 years old and is calling me every day,” Ai said, sipping tea. “But at the same time, there is always a warning. So many people I know are still disappeared without trial, and many of them have been sentenced heavily.”

The prolific Ai is showing no signs of slowing down.

He has a new documentary film coming out this year on the plight of thousands of Rohingya refugees who were forcibly displaced or fled from Myanmar to Bangladesh in 2015. He has touched on the subject of refugees in several other works, including “Human Flow,” a 2017 film for which he traveled to 23 countries to capture the human stories of people forced from their homes to escape famine, climate change and war.

But in his two documentaries released last year, the soft-spoken agitator turned his focus back to his homeland of China.

“Coronation” portrays the response early last year to the COVID-19 outbreak in the Chinese city of Wuhan, using the words and images of ordinary people and medical workers methodically coping with the crisis. With minimal narration, the film shows the quasi-military response inside temporary hospitals and ICU wards. 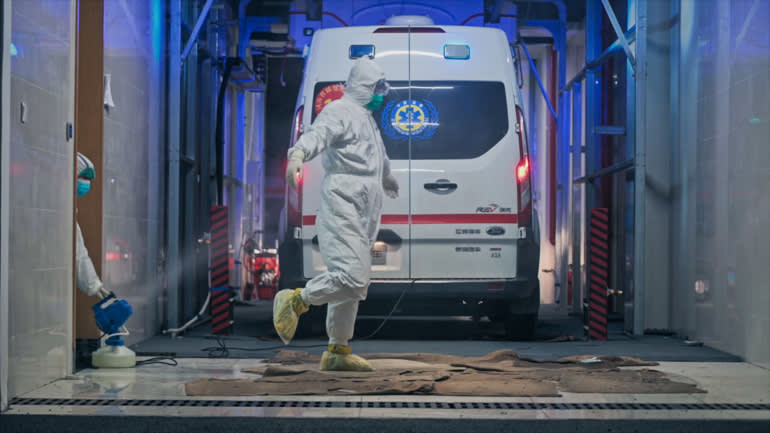 A scene from Ai Weiwei’s 2020 documentary, “Coronation,” about the early response to the coronavirus outbreak in Wuhan.

“The most powerful part is the doctors and nurses working in the emergency wards. They are almost like a futuristic species, working with great danger and sacrifice,” Ai said. “But the same time, you don’t see them showing any emotion.”

“They’re just doing their job. And then eventually, they’ll be selected as party members to have their own very great honor to be part of the Communist Party,” Ai said, sarcastically. “It’s not just brainwashing but behavior control.”

“Cockroach” is Ai’s other commentary-free documentary from last year that captures the anti-government protests in Hong Kong in the summer of 2019. The film switches between legislators, lawyers and activists — young and old — telling their stories, and dramatic footage of street demonstrations, police brutality and violence.

“The young people self-organize with modern technology. They come to the street, not asking for jobs or asking for a salary, but purely to defend freedom. Not just for a day or a week, but months — almost a year,” Ai said. “And after they finish work, they have to cover their faces and dress up in a ninja-type costume. They may get hurt, be put in jail, beaten or even disappear, but they still do it. We can call that a courageous act.”

Ai directed both documentaries remotely from Europe using footage sent to him by ordinary citizens in both places. He claims that both have been rejected by prominent film festivals and major streaming services out of the fear of losing business in China.

“Both films are very political and both reflect what China is and how China will affect the international situation. Both stories are unfinished and are continually growing,” Ai said. “So, the story is not really about the pandemic or Hong Kong struggle, but really about the power of globalization, about what will be the future when China becomes a mighty power.” “Cockroach,” Ai Weiwei’s other 2020 documentary, captures the anti-government protests in Hong Kong in the summer of 2019.

Ai said there is a good reason why his two films are not narrated.

“My reason for our approach is to record a piece of history, and to make the person who watches [the films] sense they’re part of that history,” he said. “That means they have to make their own observation and judgment, and I cannot force anybody to give them my judgment. That will be too arrogant for a documentary. I’m not that type.”

Ai said, however, that while he is self-centered when it comes to his art, he sees how it can influence things for the better.

“I’m a very selfish person. I have to do these works to find out the ultimate question — who am I?” he said. “I believe there are so many people just like me, and if I can figure out myself, it would also benefit them, too… then that may be good for society.”

Ai said the projects that helped him learn most about himself were the “Human Flow” film and “The Sichuan Earthquake Names Project,” in which he worked with volunteers to post on his blog the names of all 5,000 students who died there in the 2008 quake. A few weeks after he completed the project the following year, Chinese authorities pulled his blog account — setting Ai onto Twitter.

“The [Sichuan project] was extremely difficult, and that brought me to this very political landscape,” he said.

Ultimately, Ai does not see how you can separate art from politics.

“Any artwork, if it’s relevant, is political, or otherwise is just some kind of decoration, or for money making,” he said. “Any art that is meaningful always talks about the human struggle.”