CAS Investments, At Home’s largest shareholder that owns 17% of the stock, has opposed Hellman & Friedman’s $2.8 billion all-cash offer announced in May. Hellman & Friedman increased its offer by $1 a share to $37 on Wednesday and said it was its “best and final” price. H&F said it plans to begin its tender offer next week and needs a majority of shares to move ahead with the deal.

CAS alleged in a letter to shareholders Friday that Bird has been in contact with Hellman & Friedman since 2017. Bird would still be chairman and CEO after the deal closes and would receive additional equity, CAS said. The $100 million figure stems from Bird’s $72 million in stock holdings and vested options and accelerated vesting of $15 million in options and $14 million in other long-vesting awards.

“Given the substantial compensation and benefits Mr. Bird is set to receive under the proposed sale and his continuous dealings with H&F, we believe the sales process was flawed and riddled with conflict,” CAS Investments founder and manager Clifford Sosin said in the letter.

Sosin said he knows other shareholders oppose what he called “this insufficient, conflict-ridden deal,” and says he has received unsolicited feedback from investors who share his views about At Home’s long-term prospects.

“We truly believe the company can become the next great American retailer as the pandemic fades and the housing economy thrives,” Sosin said.

At Home declined to comment. The chain of 226 stores has said it could grow to 600 stores. CAS calculated the company’s potential future value at $70 a share and criticized the board for accepting an offer that expects the company to revert to 2019 metrics and disregards the progress made in the past two years. 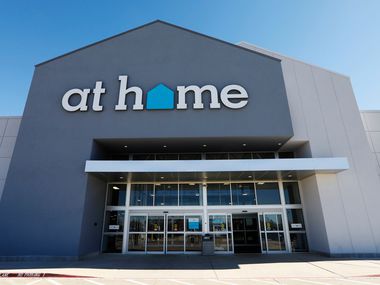 Hellman & Friedman’s offer “essentially writes off the many improvements at the company,” such as a leap in brand awareness, a loyalty program that added 2.1 million customers during the pandemic and a robust e-commerce business that didn’t exist in 2019, CAS said.

Also, many of the company’s competitors have closed stores or permanently shuttered, including Pier 1 Imports, J.C. Penney, Stein Mart and Bed Bath & Beyond.

Bird was hired in late 2012 to take what was then Houston-based Garden Ridge, a chain of about 80 stores, and turn it into an updated concept. He moved the business to Plano and started hiring a team to support a larger company while converting the big orange Garden Ridge stores to the big blue and gray At Home exteriors.

At Home went public in 2016 with an initial public offering price of $15. It told Wall Street then that it could grow its store base by 20% a year.