Let’s say your job requires you to be inside with others this winter in a poorly ventilated space. Maybe a windowless room in an aging school building, where the lack of fresh air raises the risk of spreading covid-19. Masks will help. Maybe you also want a portable air-cleaning device […]

Let’s say your job requires you to be inside with others this winter in a poorly ventilated space. Maybe a windowless room in an aging school building, where the lack of fresh air raises the risk of spreading covid-19.

Masks will help. Maybe you also want a portable air-cleaning device to help filter particles that can carry the coronavirus. But those can cost hundreds of dollars.

Why not make your own?

I built one recently at Hive76, a “maker space” — a member-owned workshop and tinkerer’s paradise, located in a former factory building in Philadelphia.

OK, maybe “built” is the wrong word. I helped hold things while Hive76 president Tom Meyer did most of the work. (He is a biomedical engineer by trade, so who was I to take charge?)

But really, it was pretty easy. All you need is a window fan, some duct tape, and five of those pleated, cardboard-framed filters that are designed for home forced-air heating systems, as we explain in step-by-step instructions below.

We can’t guarantee that this contraption will stop you from getting sick. But if done right, it is a reasonable approach for removing some potentially virus-laden particles from the air, according to air-quality scientists who have been batting around various designs on Twitter. Drexel engineering professor Michael S. Waring, who has been following the online discussions, agrees.

“This is definitely better than nothing,” he said.

Months after scientists called for the U.S. Centers for Disease Control and Prevention to acknowledge that covid-19 can be spread by airborne particles — those that remain aloft for a while, rather than settling within 6 feet — the agency updated its guidance to reflect that evidence in October.

Here’s how to remove particles from the air with the flick of a switch.

An easy approach tried by some do-it-yourselfers is simply to slap one filter onto a window fan, attaching it with big rubber bands and sealing the edges with duct tape. That design costs less than $20, assuming you already have a fan and some tape.

But forcing air through just one filter could put a fair amount of strain on the typical fan — especially if you run it for hours at a time, said Meyer, the Hive76 president.

“You’ll burn out your motor,” he said.

Better to increase the surface area through which the air travels by building a box of five filters, said Jim Rosenthal, past president of the National Air Filtration Association and chief executive officer of Tex-Air Filters, a filter manufacturer in Texas. That way, the fan is forcing the same amount of air through a greater number of “pores,” easing the load on the motor. Rosenthal came up with that design in consultation with Richard Corsi, an engineering professor at Portland State University, in Oregon.

But what type of filter? The air-quality industry uses a rating system called MERV — minimum efficiency reporting value. To capture viruses, guides from the industry and Harvard’s T.H. Chan School of Public Health both recommend air filters with a rating of at least MERV-13.

Yet, when I went to Home Depot, I discovered the store uses its own ranking system. I went with a rating of 10 (“premium”) since a quick Google search suggested that was roughly equivalent to MERV-13, and because the label claimed the filter could trap particles that carry viruses. Those filters were $20 apiece (ouch!). I later discovered on Amazon that MERV-13 filters can be bought for just $10 apiece if you buy a package of four or six. (Sorry, boss!)

A roll of adhesive weather-stripping, $4. 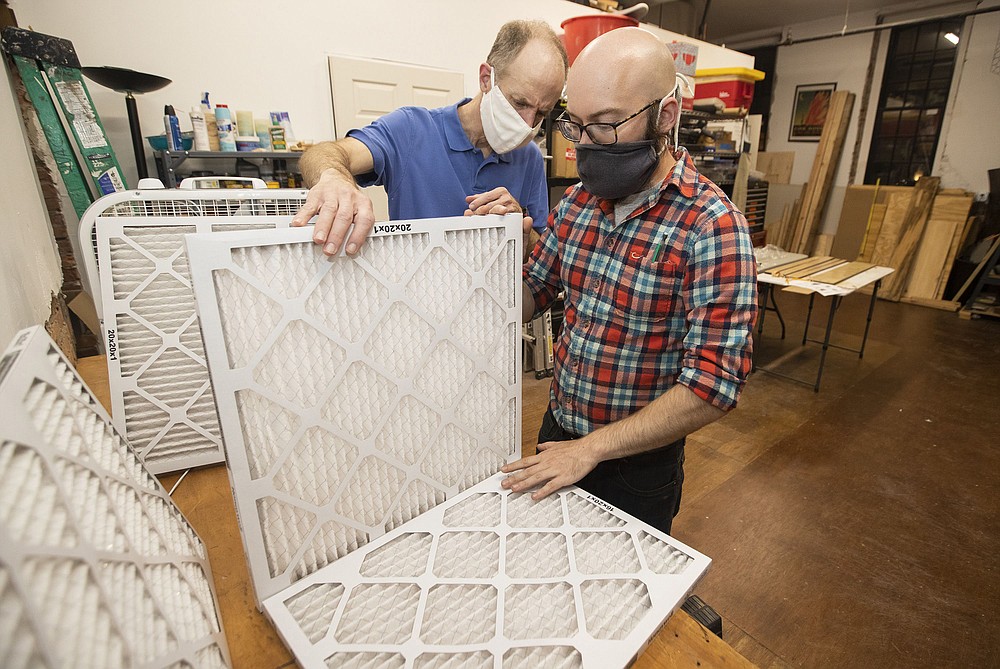 Hold two of the filters at right angles, butting the edge of one up against the face of the other while your partner applies a 20-inch length of duct tape. Be sure to make a tight seal.

Add the other three filters, one by one, until you have a five-sided box, leaving an open side to accommodate the fan. The arrows indicating the direction of airflow (printed on the filter edges) should point inward, toward the fan.

Note: with five filters that measure 20 inches square, a couple of the edges in your box won’t line up quite right. You have to play with it a little, sealing off gaps with duct tape.

Rosenthal had a better design, combining two different sizes of filters. All of them were two inches thick, but two measured 16-by-20 on a side, and three were 20-by-20. Those dimensions allow for a perfect snug fit.

Home Depot didn’t have either of those sizes, so Meyer and I made the best of it.

Lay the fan face down on a table, so the back (the side through which air gets “sucked”) is facing up. 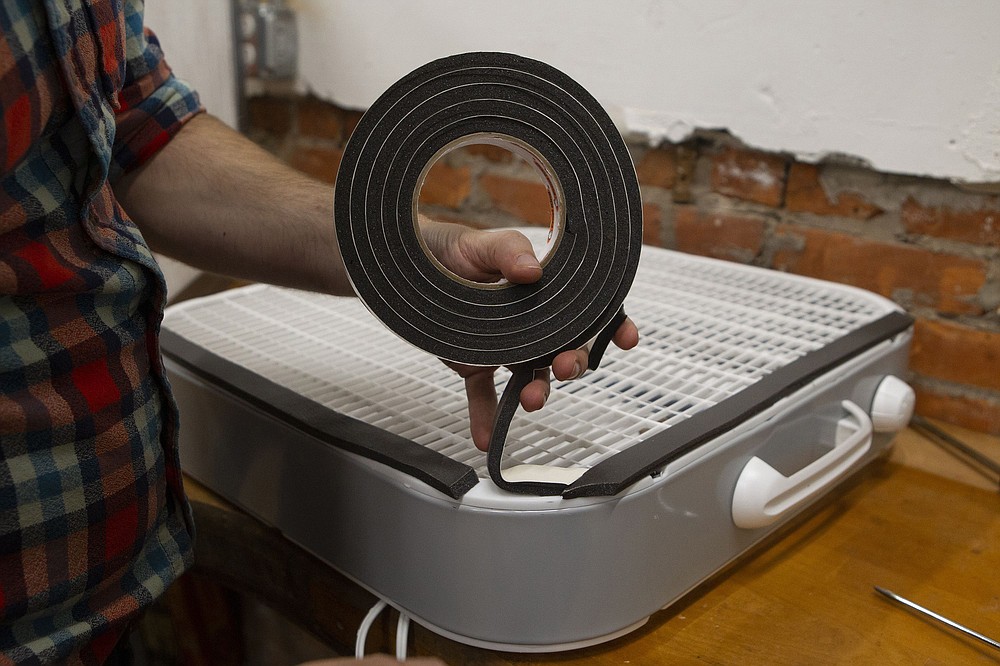 Adhesive insulation is put to box fan to create a seal. Tom Meyer, President of Hive76, and Inquirer writer Tom Avril demonstrate how to build an air filtering system out of a box fan and some furnace filters.
(TNS/Charles Fox/The Philadelphia Inquirer)

Line the outside edge with adhesive weather-stripping, creating a sort of gasket.

When you attach the box of filters in the next step and turn on the fan, the airflow will pull the box against the gasket, helping to maintain a tight seal. Airborne particles are captured in the filters as air is sucked through.

Another option is to attach the gasket and filters to the front of the fan — in other words, capturing particles by blowing the air through the filters. But in that design, the airflow pushes the filters away from the fan. Over time, the seal made by the duct tape will weaken.

Place the box on the gasket.

Double-check to make sure there are no gaps.

Stand the fan upright, place it in the center of the room, and …

We first tried the fan on “low” setting, then bumped it up to “medium” as Rosenthal recommended. It was fairly quiet, though it vibrated a bit.

But did it work? 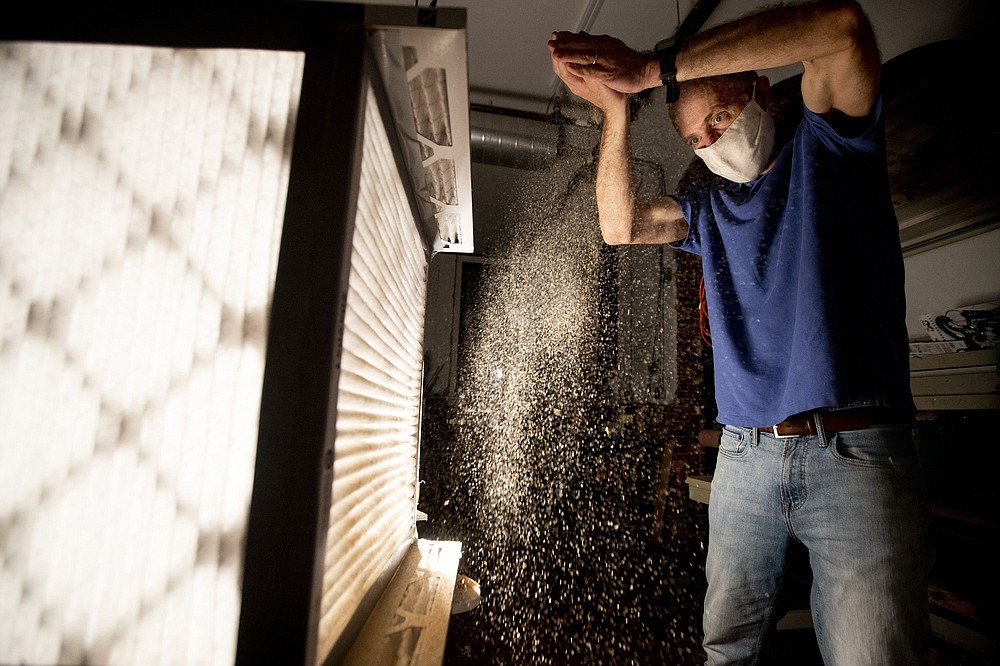 Meyer had a great idea to test the device with a spur-of-the-moment experiment. Sprinkle sawdust in front.

Hive76 had a Shop-Vac full of the stuff, so I scooped up a handful and let it fall through my fingers. Sure enough, the dust drifted toward our boxy apparatus as it hummed away.

And after a few minutes, we could see a fine layer of dust on the pleated surfaces of the filters. Rosenthal estimates it will last 6 months before the filters become so clogged that the fan can no longer draw an adequate amount of air through them.

Again, no guarantees vs. covid-19. But that would be the case even if this were a factory-made air-cleaner. No protection is perfect, which is why infectious-disease experts keep stressing the need for multiple precautions when indoors: Wear masks, open windows, and keep your distance as much as possible.

When I wondered aloud what to do with our handiwork, Meyer said it was good enough for him.