CLOSE The hardware store that’s been a mainstay of Des Moines’ north side for nearly 90 years is closing its doors. Des Moines Register One of Des Moines’ oldest restaurants will undergo a historic renovation as the neighborhood around it experiences a renaissance of sorts.  About $1.4 million will be […]

The hardware store that’s been a mainstay of Des Moines’ north side for nearly 90 years is closing its doors.

One of Des Moines’ oldest restaurants will undergo a historic renovation as the neighborhood around it experiences a renaissance of sorts.

About $1.4 million will be invested in the 125-year-old building that’s home to Chuck’s Restaurant, 3610 Sixth Ave., to fix a falling roof and exterior wall, upgrade mechanical systems, improve the façade and renovate five upstairs apartments that have been vacant for several years.

The renovation is one of several high-profile changes in the historic Highland Park and Oak Park neighborhoods, where Invest DSM has spent nearly $750,000 on upgrades and special projects in the past year.

The Sixth Avenue business district in Highland Park has been a major focus, including a complete overhaul of the beloved Highland Park Bakery; the planned Slow Down Coffee Co. in the space formerly occupied by Hiland Park Hardware, which closed last fall; the opening of a modern-day general store called Des Moines Mercantile; and façade improvements at Ichi Bike, whose owner has opened an office in the neighborhood.

“It’s been really exciting to see the momentum,” said Amber Lynch, executive director of Invest DSM. “The business owners in this area think this is a place that is worthy of their investment, and they want to stay there and grow their businesses there.”

Neighborhood Development Corp., which has partnered in all the latest projects, will purchase the building that houses Chuck’s. It will be responsible for leasing the apartments, which have been vacant for at least six years.

The five one-bedroom apartments should be available for lease in the spring, said Abbey Gilroy, executive director of NDC. Rents have not been set, though they will be affordable for the neighborhood, she said. 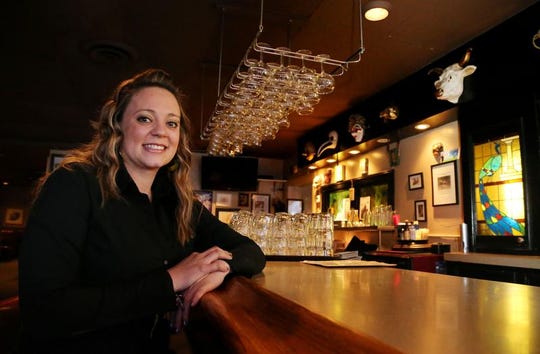 Few housing units exist in the business district, though others are in the works, Lynch said. Neighborhood Development Corp. is working to rehabilitate an eight-unit apartment building on Fifth Avenue, while a private developer has purchased a 10-unit building on Euclid Avenue.

“There will be a number of new housing units coming online, all at good, affordable rent rates, which will just help support the business in this area,” Lynch said.

Chuck’s has been a neighborhood staple since it opened in 1956. It got its humble start as a bar run by Chuck and Elizabeth Bisignano, and later became a family restaurant serving southern Italian fare, expanding as nearby property became available. Jones purchased the restaurant in 2014 after the death of longtime owner Linda Bisignano.

The restaurant is known for its pizza, pasta, live music and its annual Thanksgiving dinner, which serves thousands of hungry Iowans for free.

“Chuck’s is an important part of the Highland Park/Oak Park neighborhoods, and we are excited to continue investing in this area,” Jones said in a news release.

Kim Norvell covers growth and development for the Register. Reach her at [email protected] or 515-284-8259. Follow her on Twitter @KimNorvellDMR.