Dayton-area restaurant openings and closings during May 2021

Here’s a look at some of the delicious restaurant news that broke in May 2021 across the Miami Valley. Jollity Jollity, located at 127 E. 3rd St., is taking reservations. Credit: CONTRIBUTED Credit: CONTRIBUTED The team behind Dayton’s Fire Blocks District newest restaurant said they “can’t wait to see you.” […]

Here’s a look at some of the delicious restaurant news that broke in May 2021 across the Miami Valley. 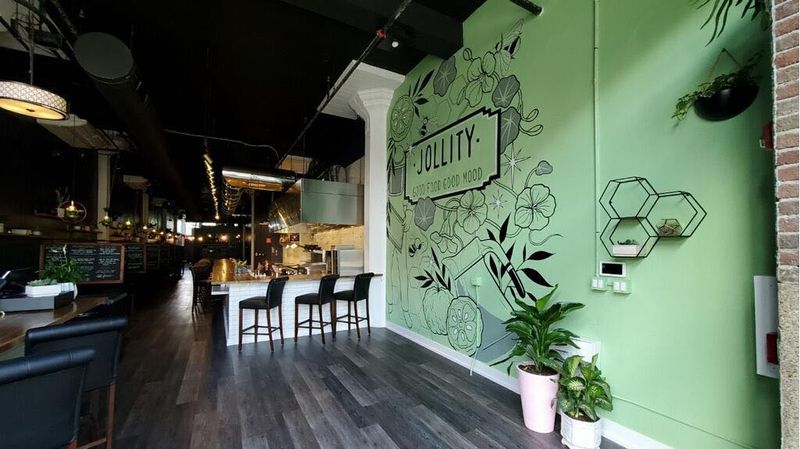 The team behind Dayton’s Fire Blocks District newest restaurant said they “can’t wait to see you.”

Jollity, located at 127 E. Third St. in Dayton, announced it will be holding a private soft-opening this weekend, but reservations for next week will be opened Friday, May 21. Once Jollity receives its liquor license, the restaurant will accept walk-ins. However, until then, it will be reservations only.

Jollity was aiming for an opening earlier this spring. However, the delays in the liquor license process pushed that opening date back.

Jollity’s menu will be split into two sections: Jollity Staples and Today’s Celebrations. Each section will feature eight to 10 menu items varying in size and price. 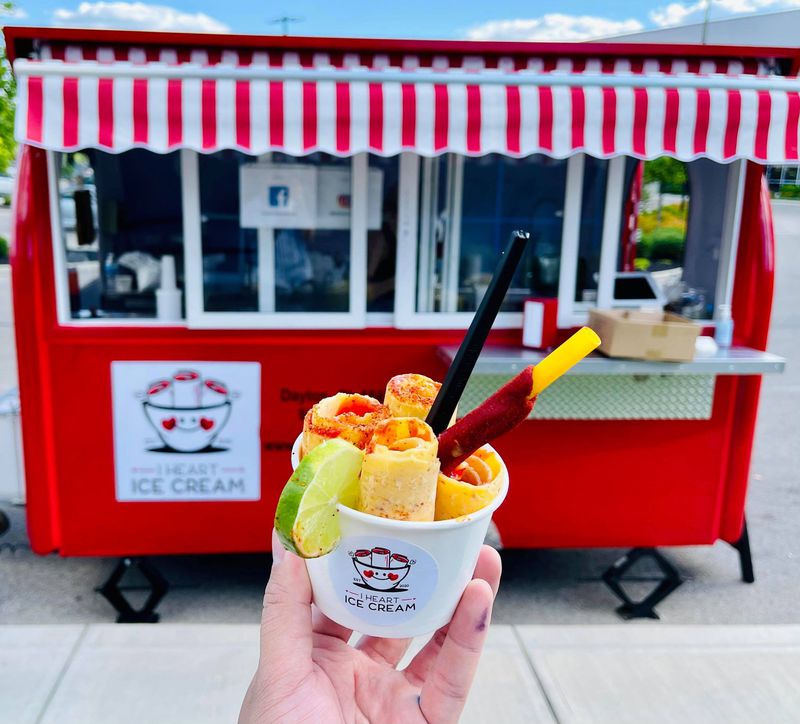 The truck will make weekly appearances at Xenia and Enon’s weekly food truck rallies, regularly stop on hospital campuses and be a part of many Dayton area festivals and special events.

I Heart Ice Cream will offer about 10 flavors at a time. The truck’s first and only — for now — vegan option is a classic Mexican dessert, the “mangonada,” a sweet, tart and spicy treat. 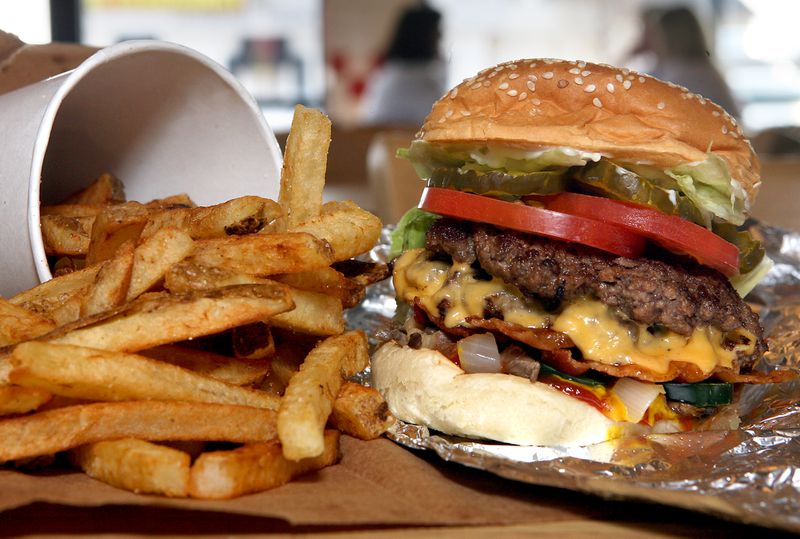 The Hamburger and fries at Five Guys in West Chester. Staff photo by Greg Lynch

The region’s sixth Five Guys restaurant is open for business.

The space is situated in a free-standing building in an outlet in front of the Waynetowne Plaza. Five Guys’ new space most recently housed Al’s Smokehouse barbecue restaurant.

The 2,430-square-foot restaurant has a pick-up window — different from a drive-through window in that it will serve customers who have placed their orders in advance online — and has seating for 28, including outside seating. 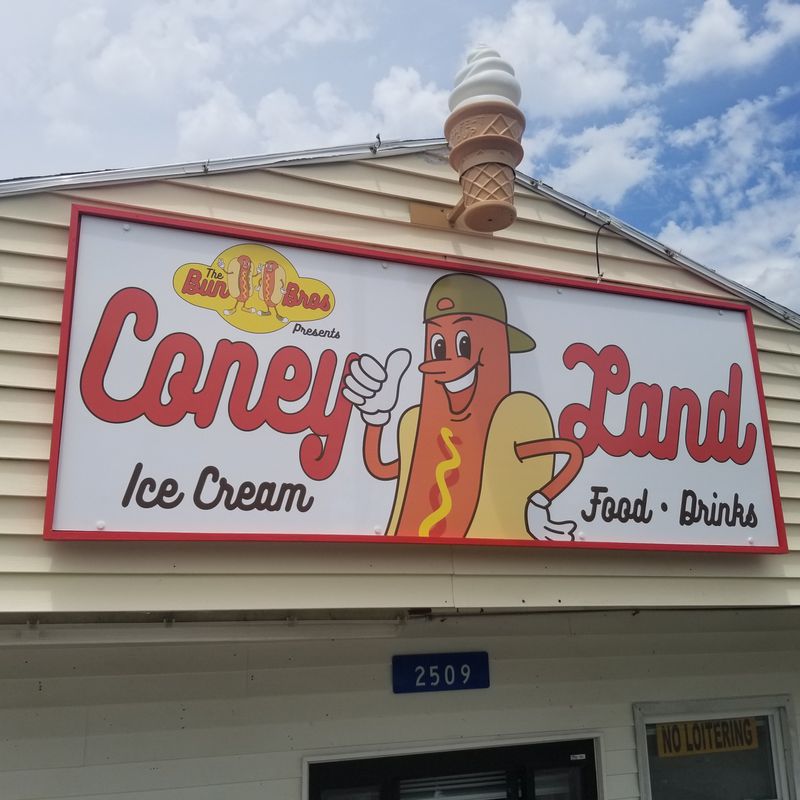 “The Bun Bros LLC ConeyLand” or just “The Bun Bros” will hold its grand opening today, May 28 starting at 11 a.m. until 9 p.m. The brick and mortar, located at 2509 Valley Pike in Riverside and owned by Mike Davis and Von Crager, is a full-service ice cream shop with a lengthy grill menu, including some not-so-average hot dog stand items.

Two longtime Daytonian friends are bringing hot dogs back to the former space of the ConeyLand stand in Riverside.

“The Bun Bros LLC ConeyLand” or just “The Bun Bros” held its grand opening Friday, May 28, at 2509 Valley Pike in Riverside. It is a full-service ice cream shop with a lengthy grill menu, including some not-so-average hot dog stand items.

Other items customers will find exciting and unique are two house-made chili dog sauces, a bacon-wrapped dog that’s deep fried then smothered in cheddar and jalapenos, a Greek burger on a brioche bun with tzatziki and feta cheese, an espresso double-shot shake, and a “Red Bull Float.” 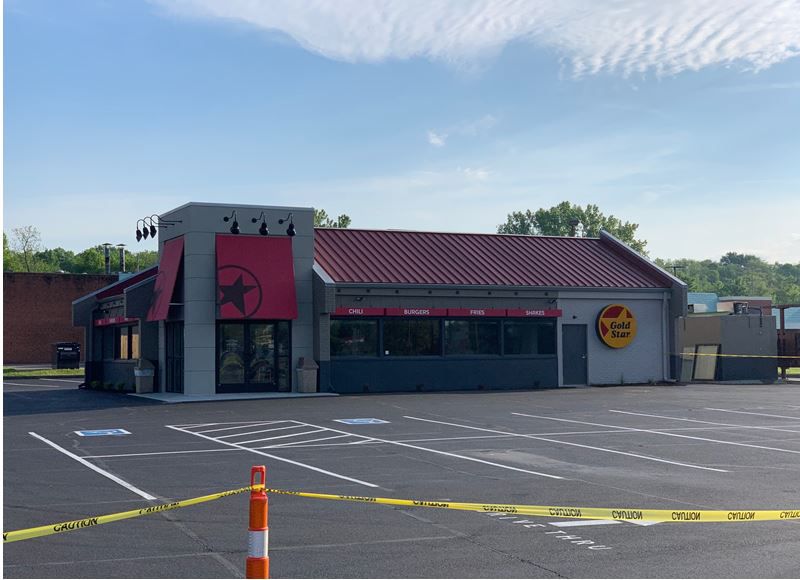 Gold Star Chili is reopening one of its Warren County locations following expansive renovations to provide guests with a fresh look to go with their favorite meals.

Located at 10 Dave St. in the Colony Square Shopping Center, Gold Star Lebanon has completed renovations updating the exterior and interior of the 2,224 square-foot location. 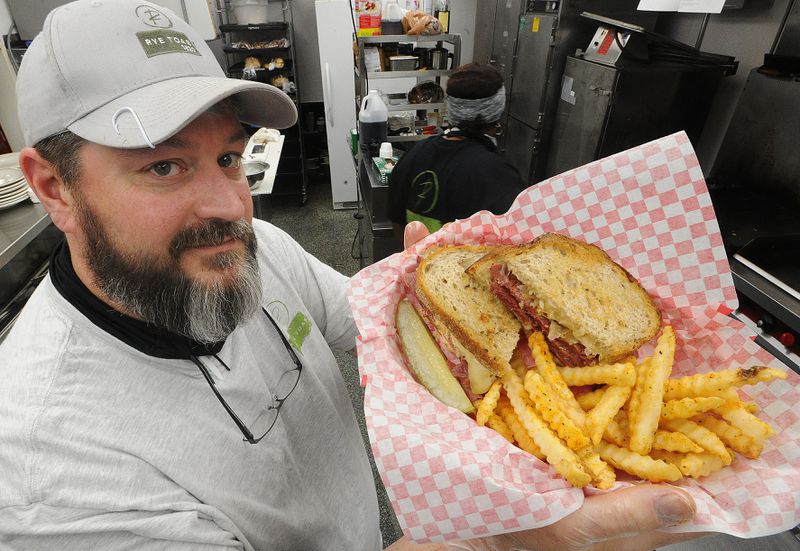 Chef Tom Tiner, of Butler County, said he opened Rye Toast, 1015 S. Main St. in Miamisburg earlier this month after 36 years in the food service industry, including stints at restaurants, hotels, hospitals and senior living facilities, with some on-the-side gigs as a private chef and caterer.

The Rye Toast menu includes a wide array of traditional breakfast offerings such as biscuits and gravy, waffles, French toast, pancakes, omelets and eggs prepared in any style. Tex-Mex items include a bowl of Carne Guisada, or Latin beef stew, with a side of white rice and four flour tortillas. Guests also can order two chicharron tacos with smoked sausage and home fries. 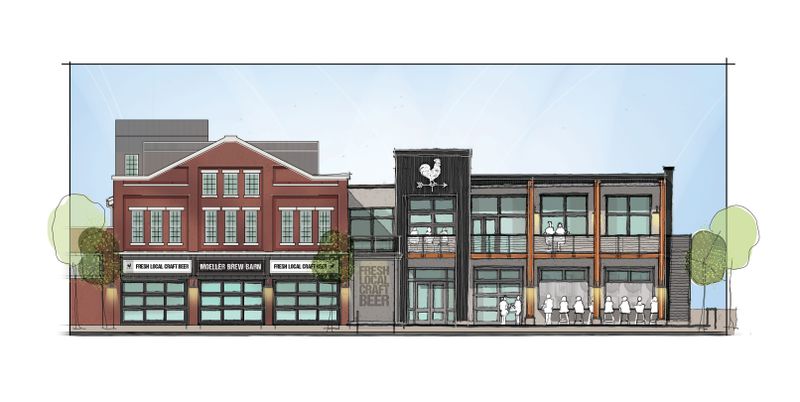 Moeller Brew Barn plans to add a third location, this one near Day Air Ballpark in the rapidly growing Water Street District.

The new business will have three bars, onsite brewing and an outdoor beer garden that will be pet and bicyclist-friendly.

Moeller Brew Barn, which has locations in Troy and Maria Stein, hopes to open the new brewery, kitchen and tap room at 424 E. First St. in spring 2022, around the time the Dayton Dragons hosts its first home game of the season.

The building, formerly part of the Mendelson’s liquidation complex, is directly south of the ballpark. 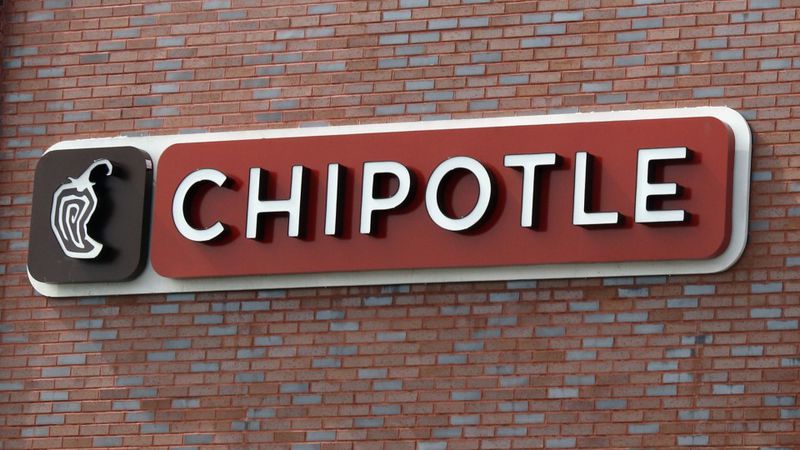 Chipotle Mexican Grill, which has more than a dozen restaurants in the Dayton area, recently filed for a liquor permit with the state of Ohio for a location at 1925 W. Dorothy Lane in Moraine.

Chipotle Mexican Grill, which has more than a dozen restaurants in the Dayton area, recently filed for a liquor permit with the state of Ohio for a location at 1925 W. Dorothy Lane in Moraine.

The facility was renovated as recently as this year to include a new roof and façade, according to a listing by real estate company Loopnet. It’s the restaurant’s new protype, with a “Chipotlane” drive-thru, where customers can pick up orders that they placed through the company’s mobile app or website.

The new Chipotle is expected to open by late summer, according to Erin Wolford, a company spokeswoman.

ExploreNew Chipotle to open in Moraine 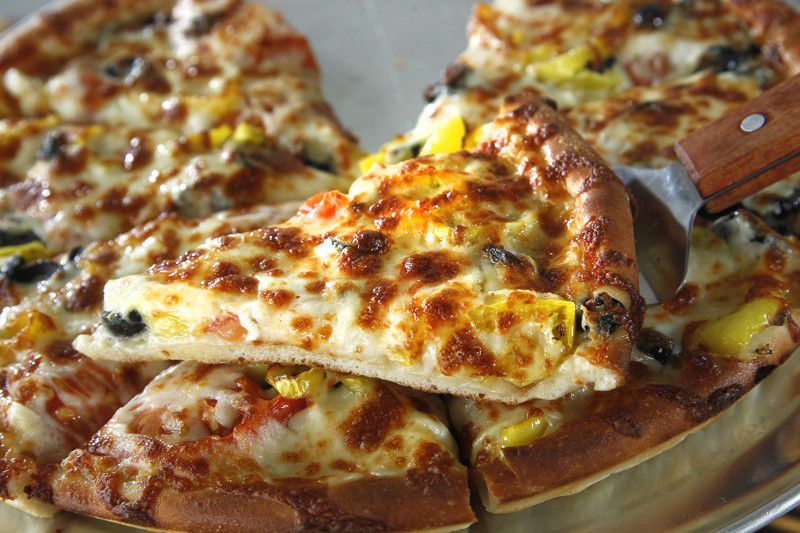 Gionino’s Pizzeria will open its new Kettering restaurant at 4015 Far Hills Ave. at Stroop Road by Thursday, June 10, pending the installation of a pizza oven, according to Tony Clark, Dayton-area franchise owner of Gionino’s. If the instillation is delayed, Clark said the backup opening date is Thursday, June 17.

The tenant space in the Castle Hills Shopping Center, located across from the Town & Country retail center, previously housed an Edible Arrangements shop that relocated within Kettering in July 2020.

The new Gionino’s location will be primarily a take-out and delivery operation, as the space is not large enough to accommodate indoor seating. 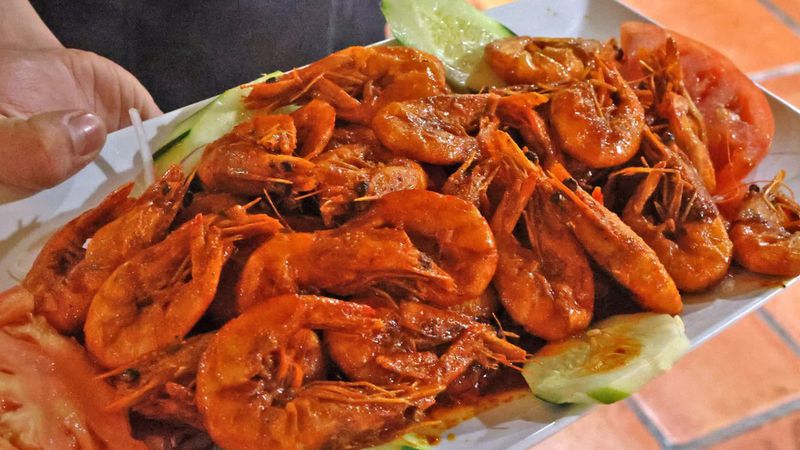 Mariscos Cinco de Mayo is planning a grand opening June 17. The restaurant is located at 1236 Upper Valley Pike in Springfield.

Menu items will include fajitas, tacos, enchiladas, and other Mexican food favorites. There will also be seafood options featured. In fact, as the first part of the restaurant name, Mariscos translates to seafood in English.

Sandra Casillas and her husband, Francisco Casillas, have both worked in the restaurant business for most of their lives. Francisco has been a head cook since 2010. 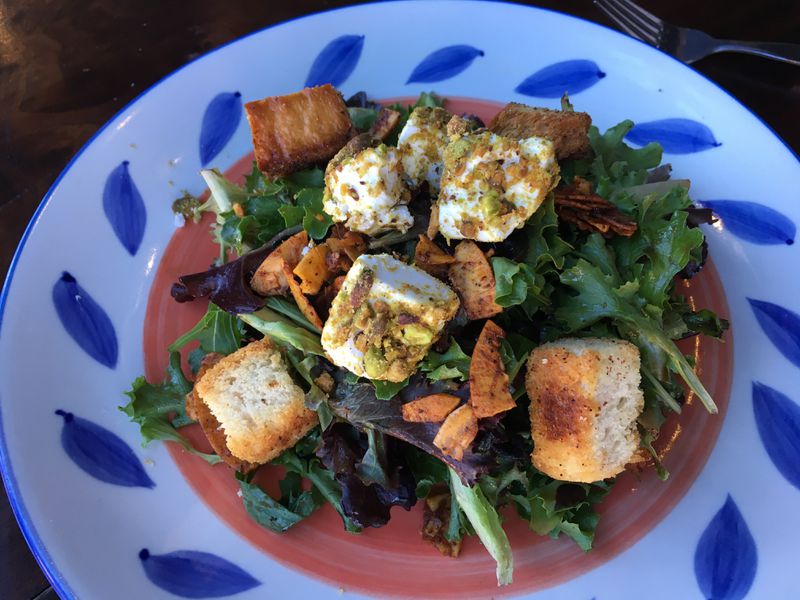 Cafe 1610 on Wayne Ave. has closed but has plans for a new location in the future.

Café 1610, Dayton’s only all-vegan restaurant is closing — for now.

May will be Café 1610′s last month operating in its 521 Wayne Ave. location that opened in September 2020. However, co-owner Molly Blackshear assured the business would not be closed permanently. Instead, she said they would be relocating, rebranding and “starting pretty much over in a sense.”

“We just wanted to let everybody know because I feel like it’s fair and we want to show our appreciation to our customers that have supported us through these months of COVID and everything else,” Blackshear said. “Dayton has been very supportive, and it’s also shown how much we were needed in the community.”