Auction Action In Atlanta, Ga. ATLANTA, GA. – Fine art usually dominates in a mixed category auction in which antiques and fine art vie for bidder’s attention and dollars. Such was not the case in Ahlers & Ogletree’s July 18 Summer Estates auction. While the sale did not feature any […]

ATLANTA, GA. – Fine art usually dominates in a mixed category auction in which antiques and fine art vie for bidder’s attention and dollars. Such was not the case in Ahlers & Ogletree’s July 18 Summer Estates auction. While the sale did not feature any five- or six-figure works of art that top-loaded the sale, it brought solid results, with decorative arts dominating the leaderboards. Of the 573 lots that crossed the block, more than 90 percent found homes and the aggregate total for the sale – just shy of $440,000, including buyer’s premium – fit squarely within the $291/495,000 estimate. And, as Ahlers and Ogletree’s director Elizabeth Rickenbaker said, for one of the firm’s summer sales – typically smaller than those held in spring and fall – it was “very strong for its size.”

“We were very pleased with the tenor of the entire auction. With premium, we almost hit the high estimate and it was a very strong showing without any real marquee lots. The highest value is usually in fine art; in this sale, decorative arts were. We’re also seeing a trend of more and more bidders realizing the beauty of buying at auction, and the diversity and character of what we are offering…they realize you don’t need to go buy something new.”

It may not have been a marquee lot, but the top price went for a pretty impressive piece nonetheless. Topping off at $11,875 was a Georgian-style secretary bookcase made by contemporary English furniture maker Theodore Alexander that replicated a piece at Althorp, the Spencer family seat and the home of the late Diana Spencer, Princess of Wales. Not only did the piece feature the Spencer family crest on its tooled leather writing surface, but it housed 100 drawers, 26 of which were concealed. Rickenbaker said she was not surprised at the result, noting that the piece probably retailed for more than $30,000 when it was new. She confirmed that it had come from an Atlanta-area estate and sold to a local buyer bidding online.

In a day and age where people are enjoying craft cocktails and entertaining at home, it may not be too surprising that an Italian Midcentury Modern brass and glass rolling bar cart was so popular among bidders. Rickenbaker said the lift-off tray over the vitrine was unusual. It sold to an online buyer in California for $9,375, the second highest price of the day. It came from the same estate as the Althorp secretary bookcase, an estate that Ahlers & Ogletree had cherry picked for the better things.

Among the other items cherry-picked from that estate was a matched pair of late Nineteenth Century French marble top bouillotte tables that a buyer in Pennsylvania snapped up for $4,840. Rickenbaker said bouillotte tables “sell themselves,” though the provenance to Atlanta antique dealer Walter McIntyre likely helped garner interest and drove the price for the pair.

The Fairmount, Ga., estate of Aimee Lacey Champion, designer and manufacturer of wool rugs that were popular in the 1980s and 90s, offered up nearly 50 lots, including a Continental school oil on canvas painting of peacocks and other fowl in a barnyard that achieved $6,655 and the highest price paid for a work of fine art in the sale.

“Her estate was just north of Atlanta and that painting was over her fireplace. She had a very stately and well-appointed Southern home,” Rickenbaker recalled.

Other notable results from Champion’s estate were a pair of Renaissance Revival garden urns that sold for $3,328, a Napoleon III patinated and parcel-gilt-bronze urn or jardiniere at $1,573 and a pair of Nineteenth Century gilt-bronze lamps with griffin handles that realized $1,210. A Steinway ebony baby grand piano and bench also sold for $1,210 in what may have been the bargain of the day.

Asian art and antiques comprised about one fourth of the sale and started the day, with several strong results backed by interest from Chinese buyers who were successful in buying many – but not all – of the lots. A large, framed Chinese embroidered panel with dragon motifs from an Atlanta collection sold to a phone bidder from California for $6,050. Dragons were the dominant motif in a blue and white bottle vase that courted interest from three Chinese phone bidders, with one of them taking it for $4,538.

The red and green decoration in a Chinese four-fold hardwood and hardstone floor screen were unusual in that they were carved cinnabar; it closed out at $5,143. The seller of a Chinese Republic Tsao Kun gilt-bronze commemorative medal with a 1923 strike date was very happy that it made $4,235, just ahead of the $3,933 realized by a pair of Chinese porcelain hat stands with quatrefoil piercings and auspicious rooster motif decoration on all sides. Chinese buyers were successful on all three lots.

Prices quoted include the buyer’s premium. For information, www.aandoauctions.com or 404-869-2478. 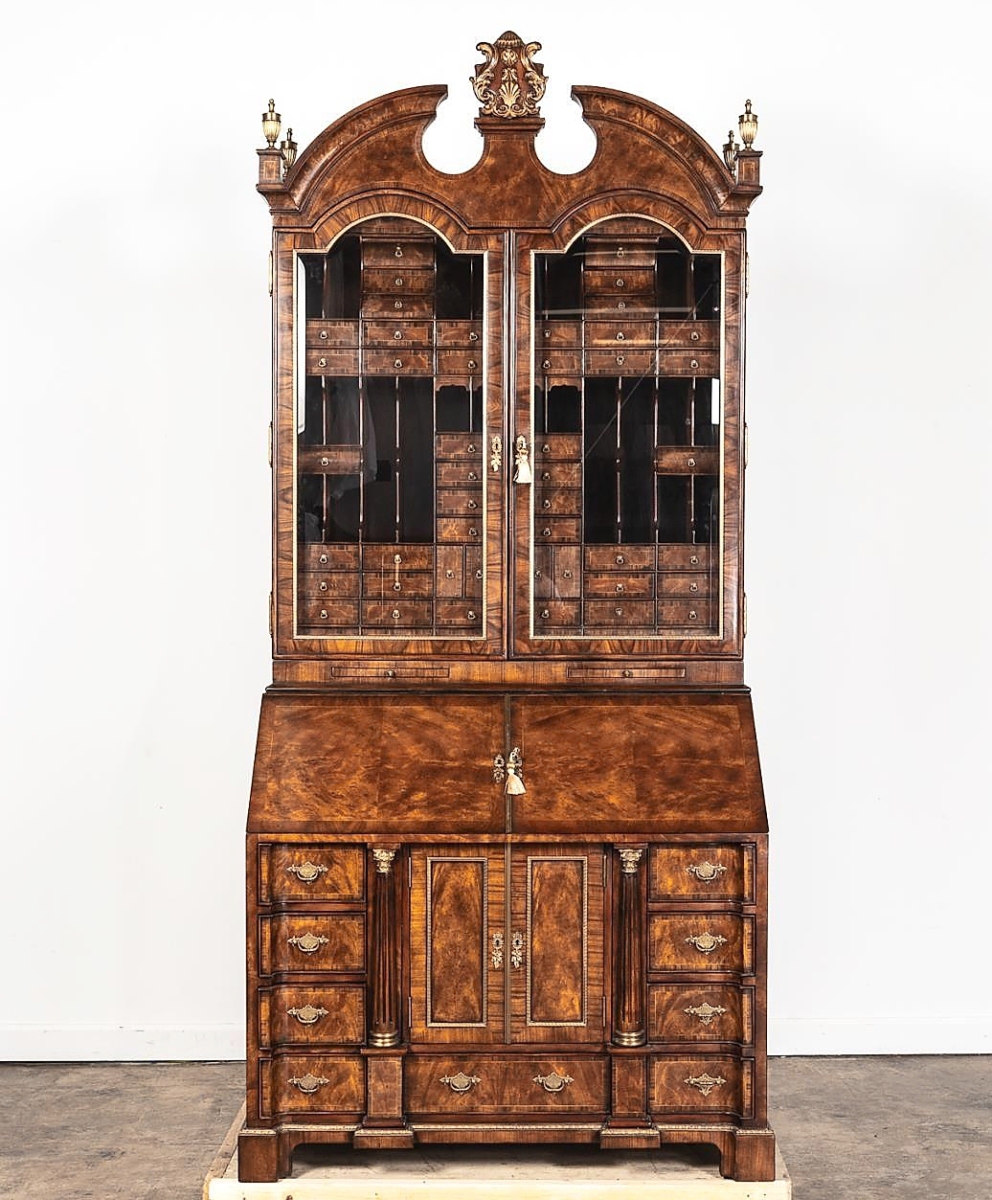 “We do very well with contemporary high-quality decorative furniture and that was a very good result,” Elizabeth Rickenbaker said. This regal Georgian-style mahogany veneered desk and bookcase replicated one belonging to the Spencer family in England, at their Althorp estate. Made by Theodore Alexander, it boasted 100 drawers and sold to a local bidder, buying online, for $11,875, the top price in the sale ($5/7,000). 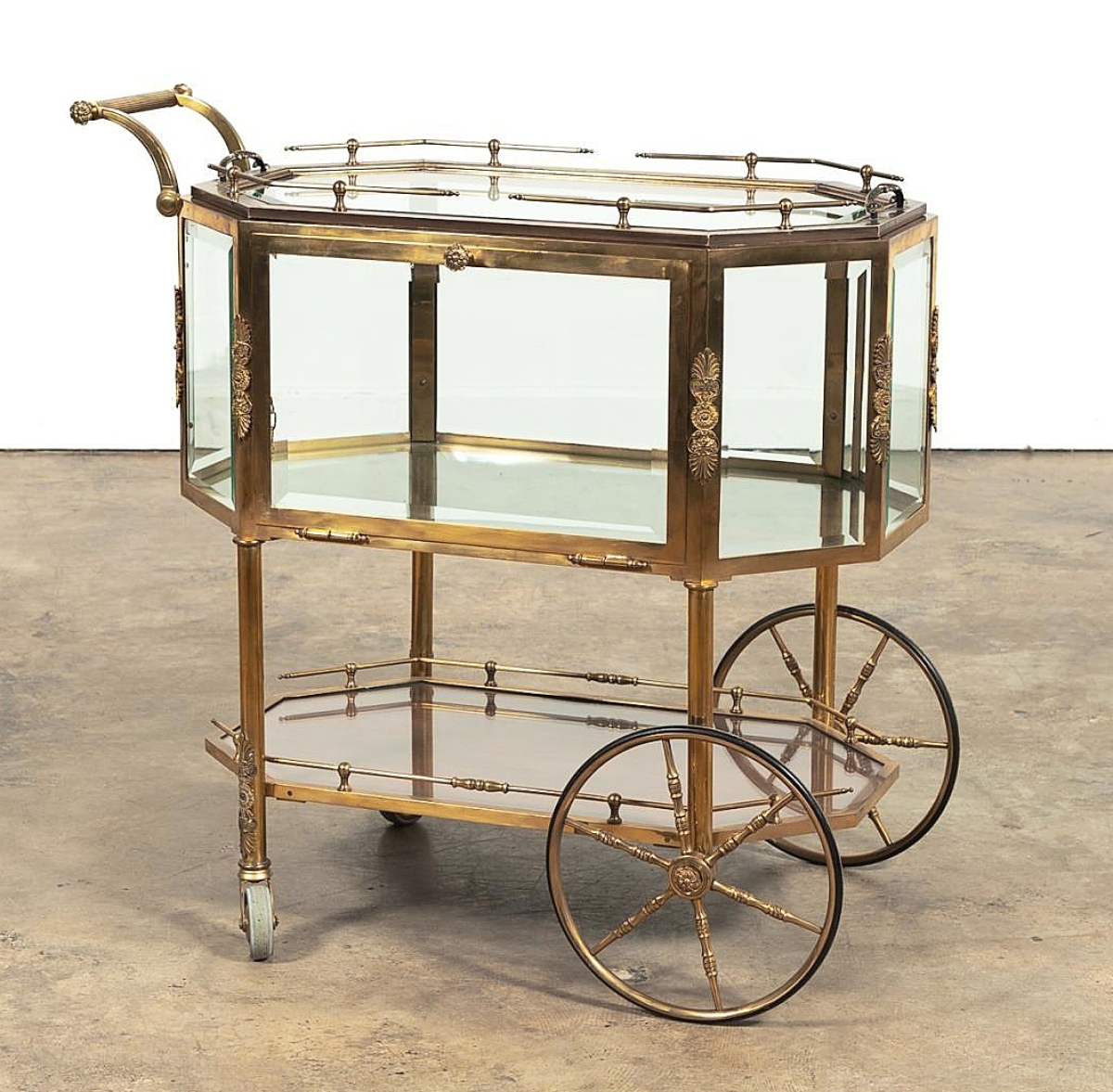 “I love bar carts and that was so much fun,” Elizabeth Rickenbaker said, referencing this Italian Midcentury Modern gilt-brass and glass drink and dessert trolley that rolled out the door to a California buyer for $9,375 ($400/600). 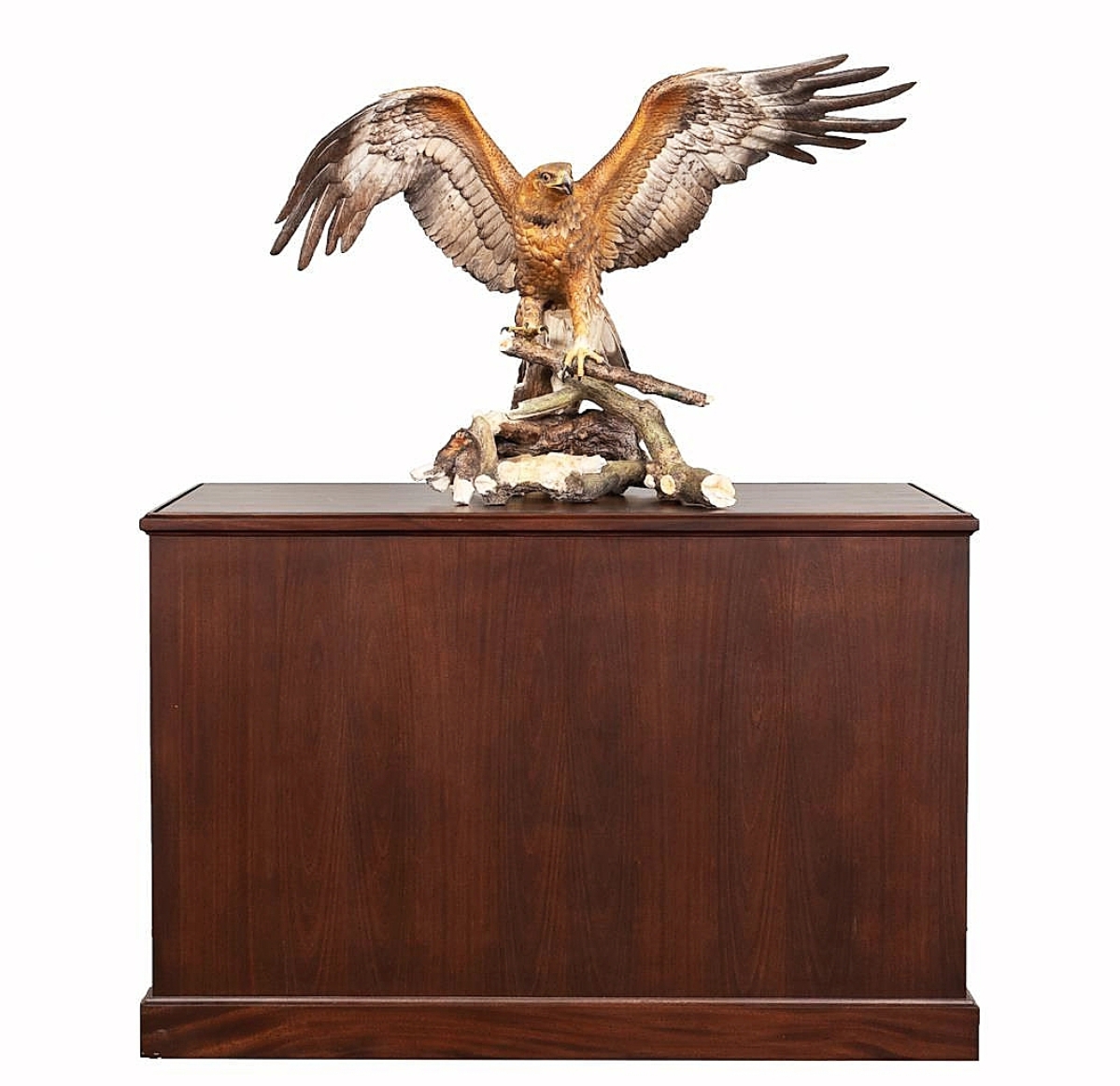 The lifesize birds done in extraordinary detail by Boehm (American, founded 1953) are extremely fragile and rarely survive in perfectly intact condition; this cased Golden Eagle porcelain bisque figure had a small restoration to one wing and brought $7,865. It will be flying — very slowly and carefully — to its new home in North Carolina ($4/6,000). 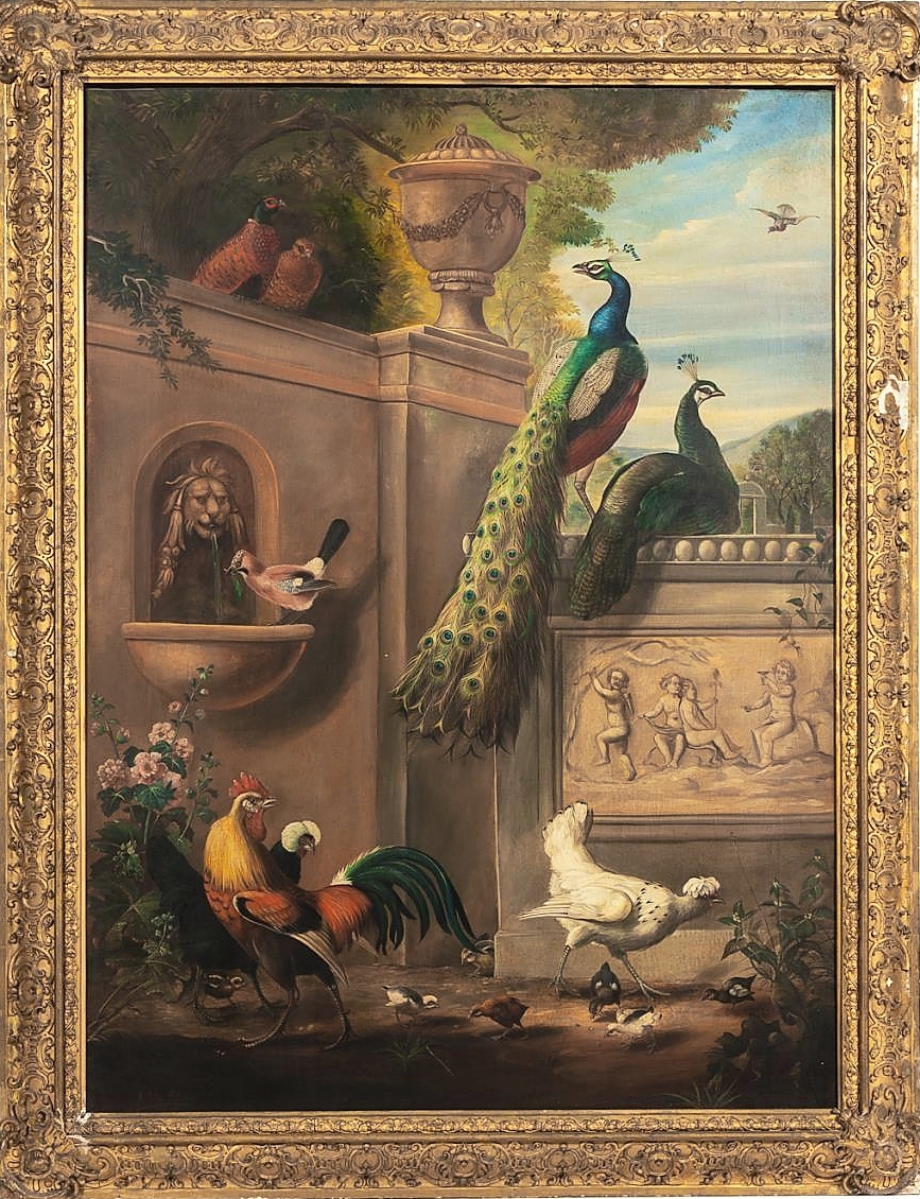 The highest price for a work of fine art was $6,655, realized for “Neoclassical Garden Scene with Peacock and Fowl” by A. Van Stix and paid by a buyer in California ($ ,000). 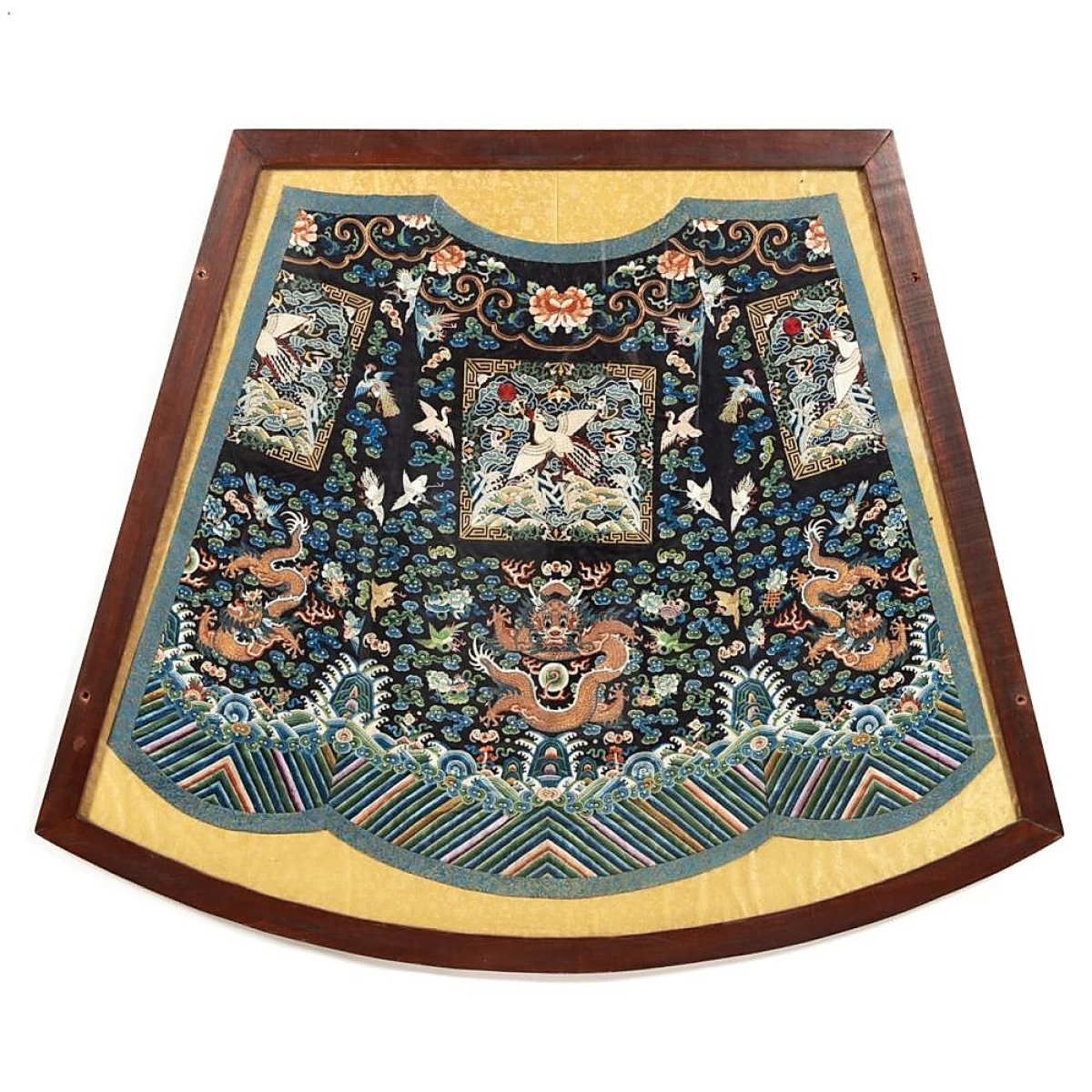 The bird, floral and dragon emblems on this embroidered Chinese panel appealed to bidders around the world, with a buyer in California prevailing at $6,050 ($400/600).

A buyer from New York paid $5,748 for this ten-piece green-painted cast aluminum “grotto” garden set by Tropitone. The set had come form the estate of local Atlanta artist, Adrienne Anderson ($ ,000). 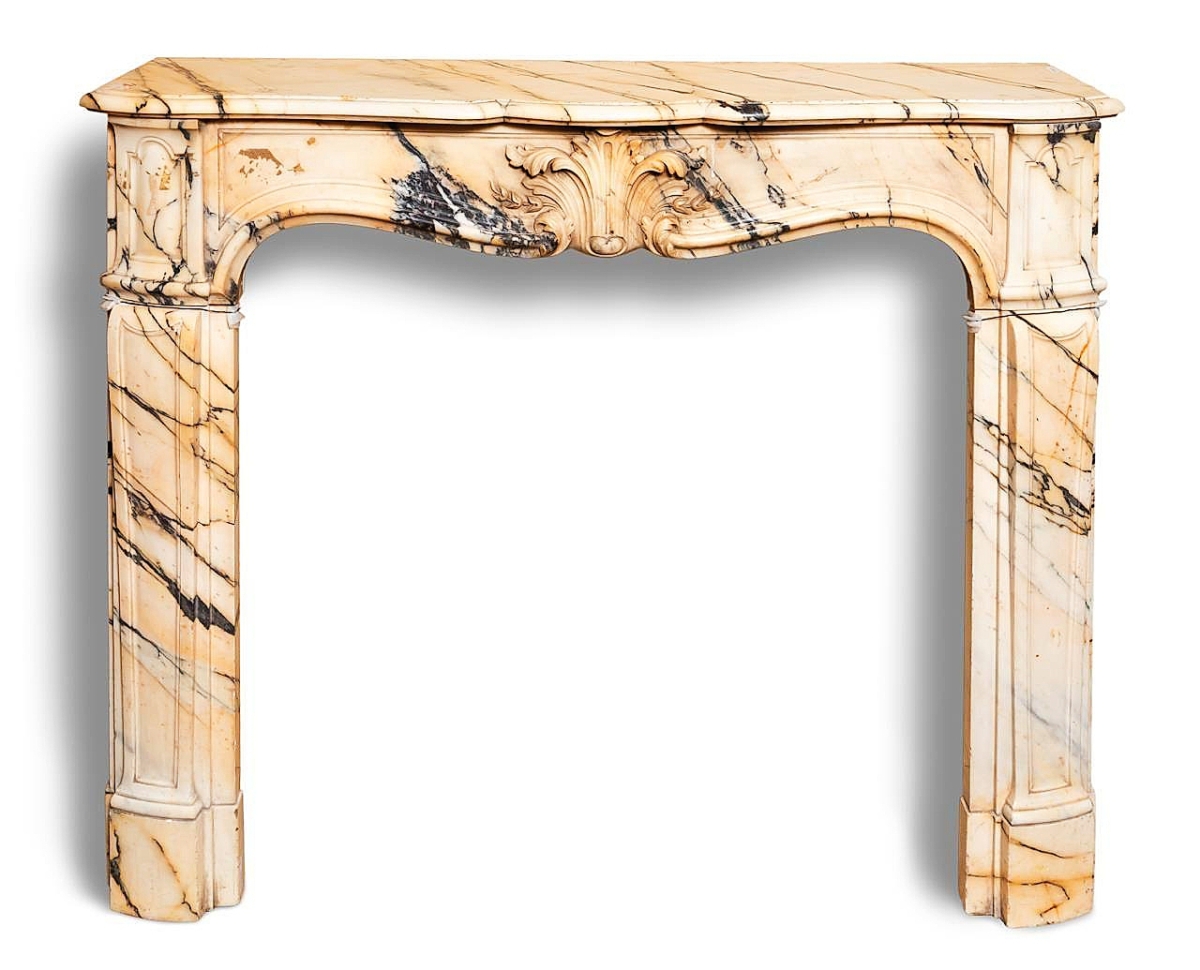 Colored marble mantels can be harder to sell than black or white ones that can be incorporated into interiors more easily. The white marble of this late Nineteenth or early Twentieth Century Louis XV-style example helped it achieve $5,748 ($ ,000). 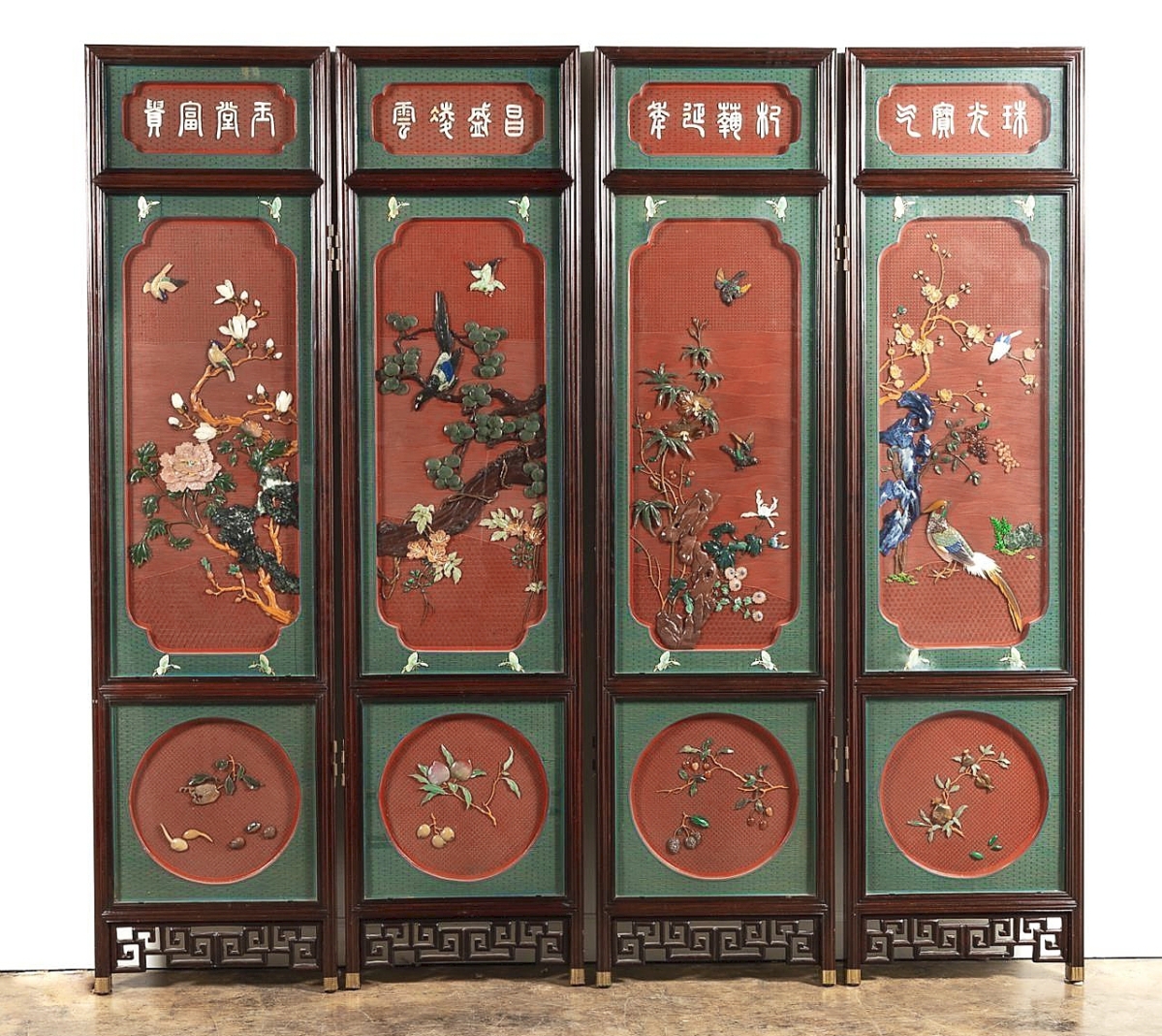 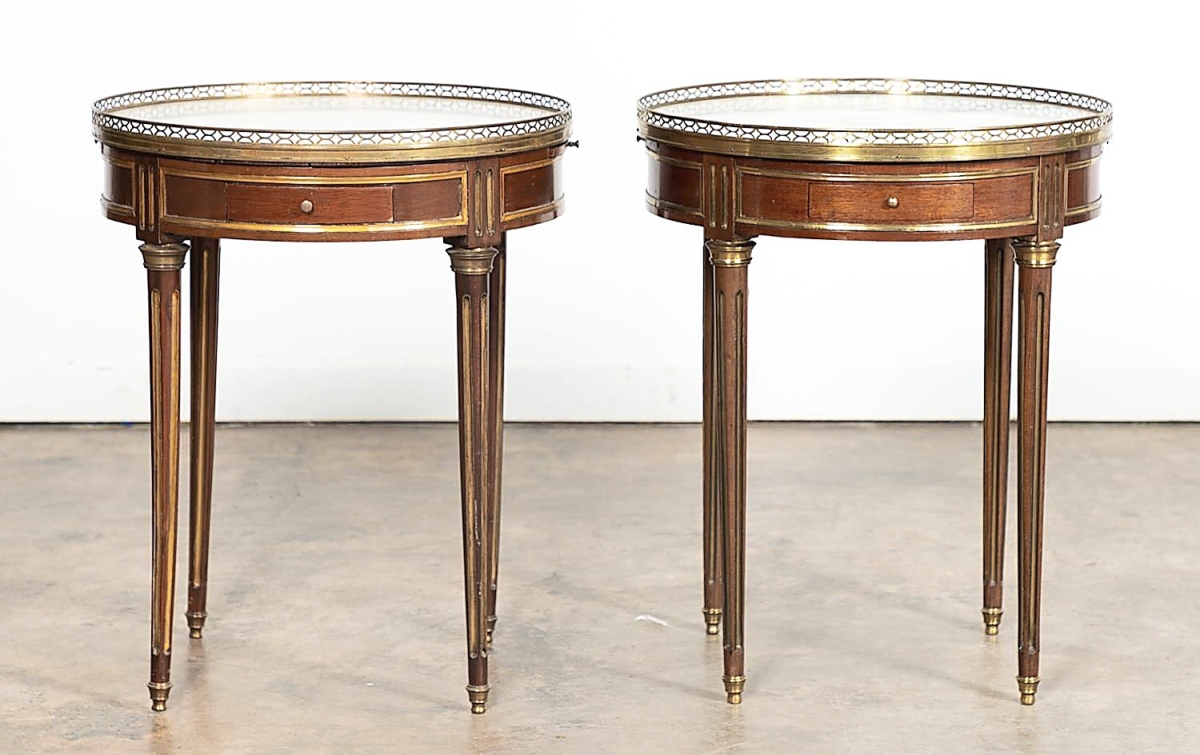 Eternally handy, bouillotte tables can fit into nearly any interior. The condition and matched quality of this pair prompted additional interest and they brought $4,840 from a buyer in Pennsylvania ($800-$1,200). 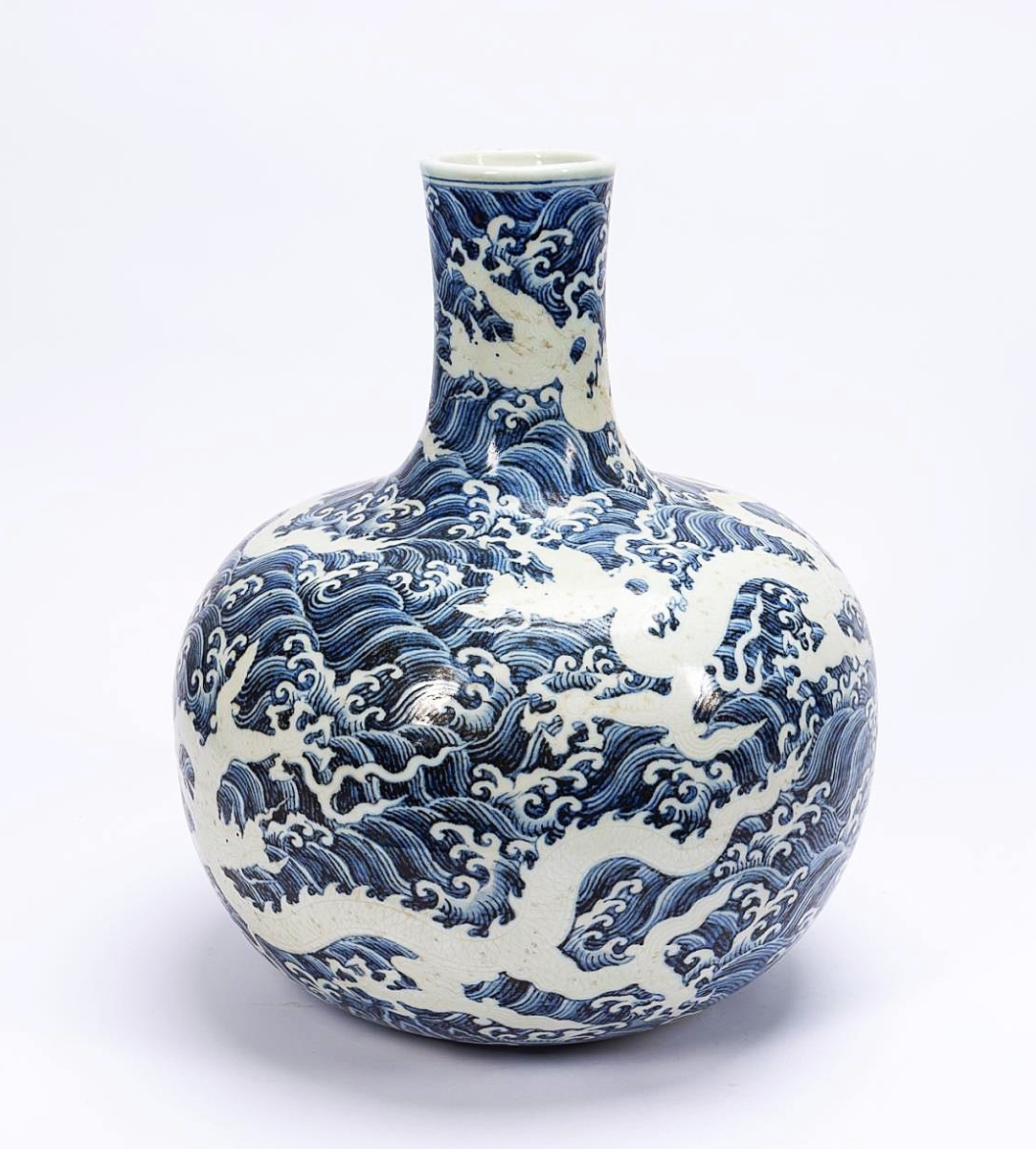 The proportions and blue and white dragon and wave motifs of this bottle vase were appealing and inspired three competing Chinese phone bidders, one of which topped it off at $4,538 ($600/800). 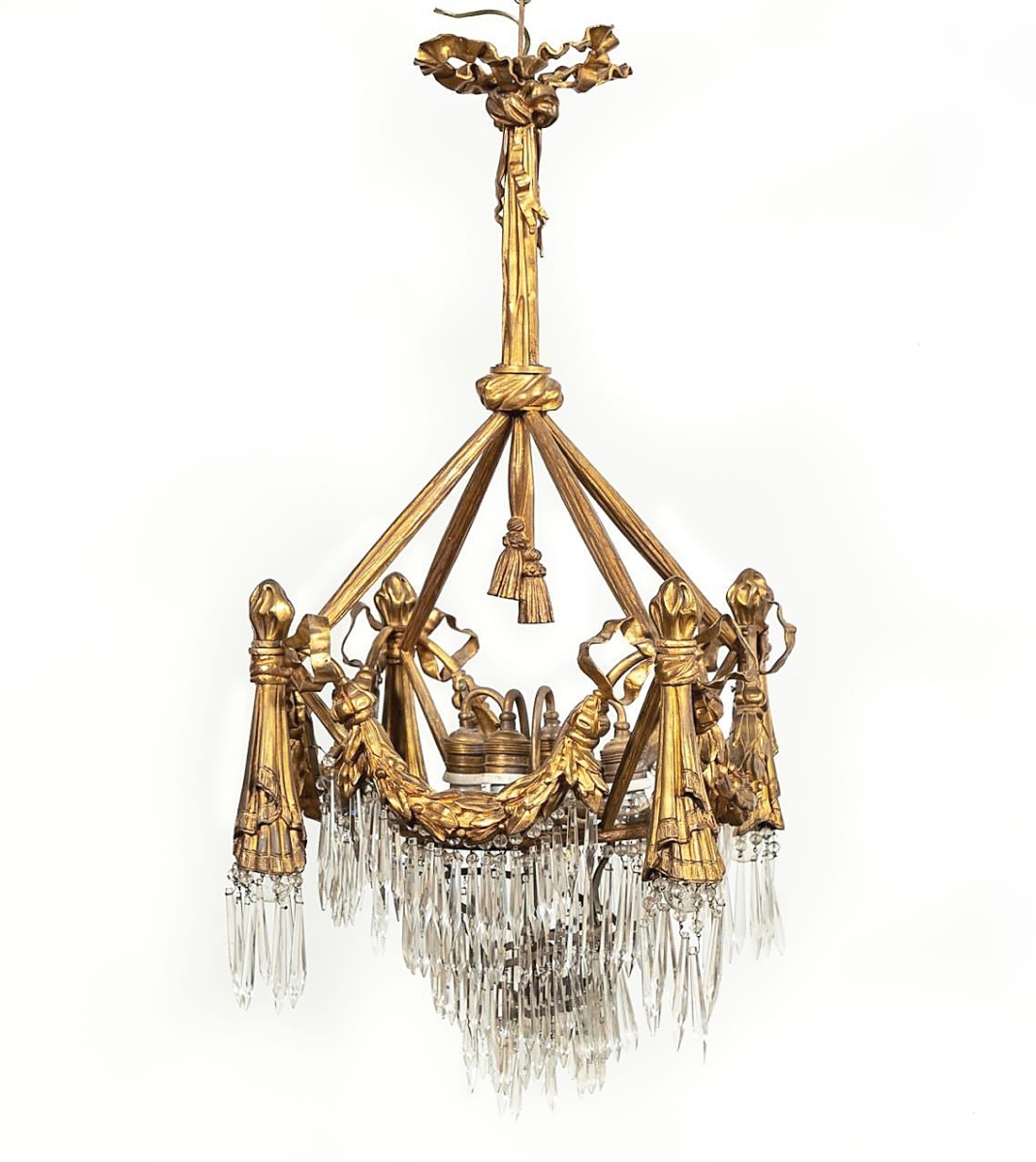 One category that Elizabeth Rickenbaker noted particularly strong results in was lighting, suggesting that supply chain issues might be making it more difficult for consumers to purchase things new. A buyer in New Orleans paid $4,538 for this Belle Epoque gilt-bronze lover’s knot chandelier that needed restoration ($ ,000). 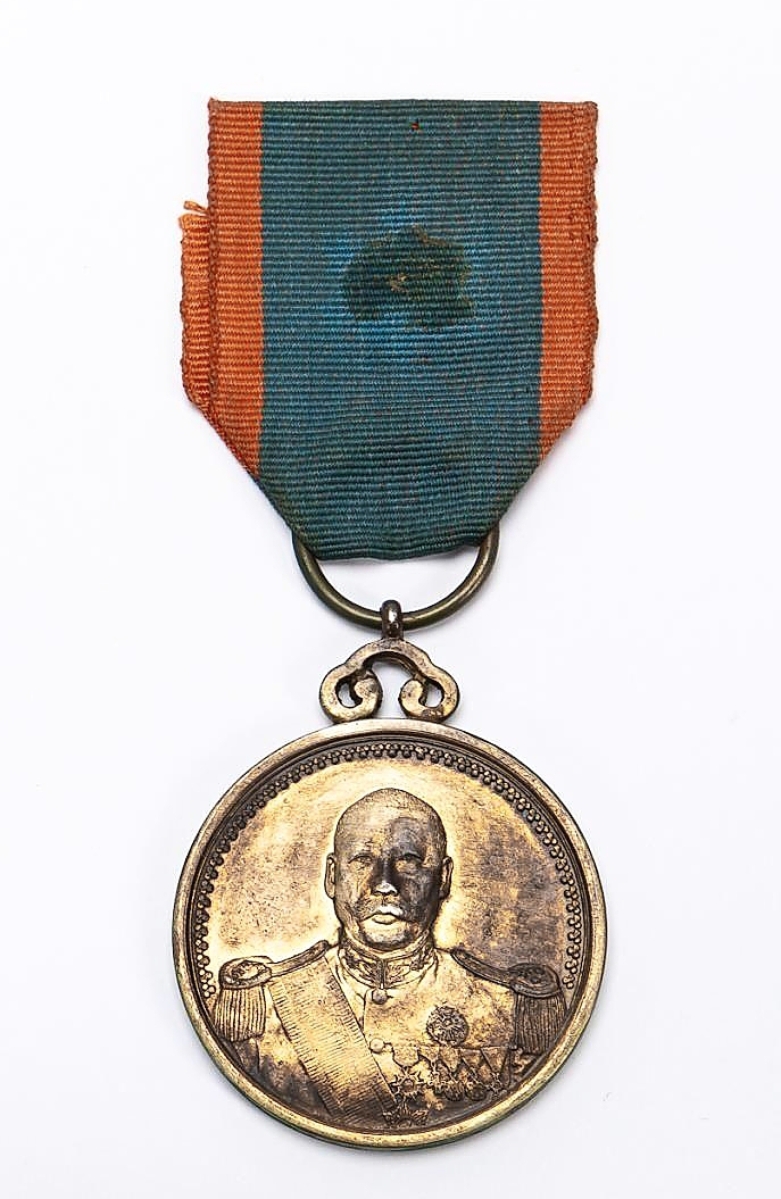 Elizabeth Rickenbaker said Ahlers & Ogletree is seeing increasingly more pieces made during China’s Republic period. This 1923 gilt-bronze medal commemorated Chinese president Tsao Kun and passage of the Chinese constitution. It sold to a buyer in China for $4,235 ($ ,000). 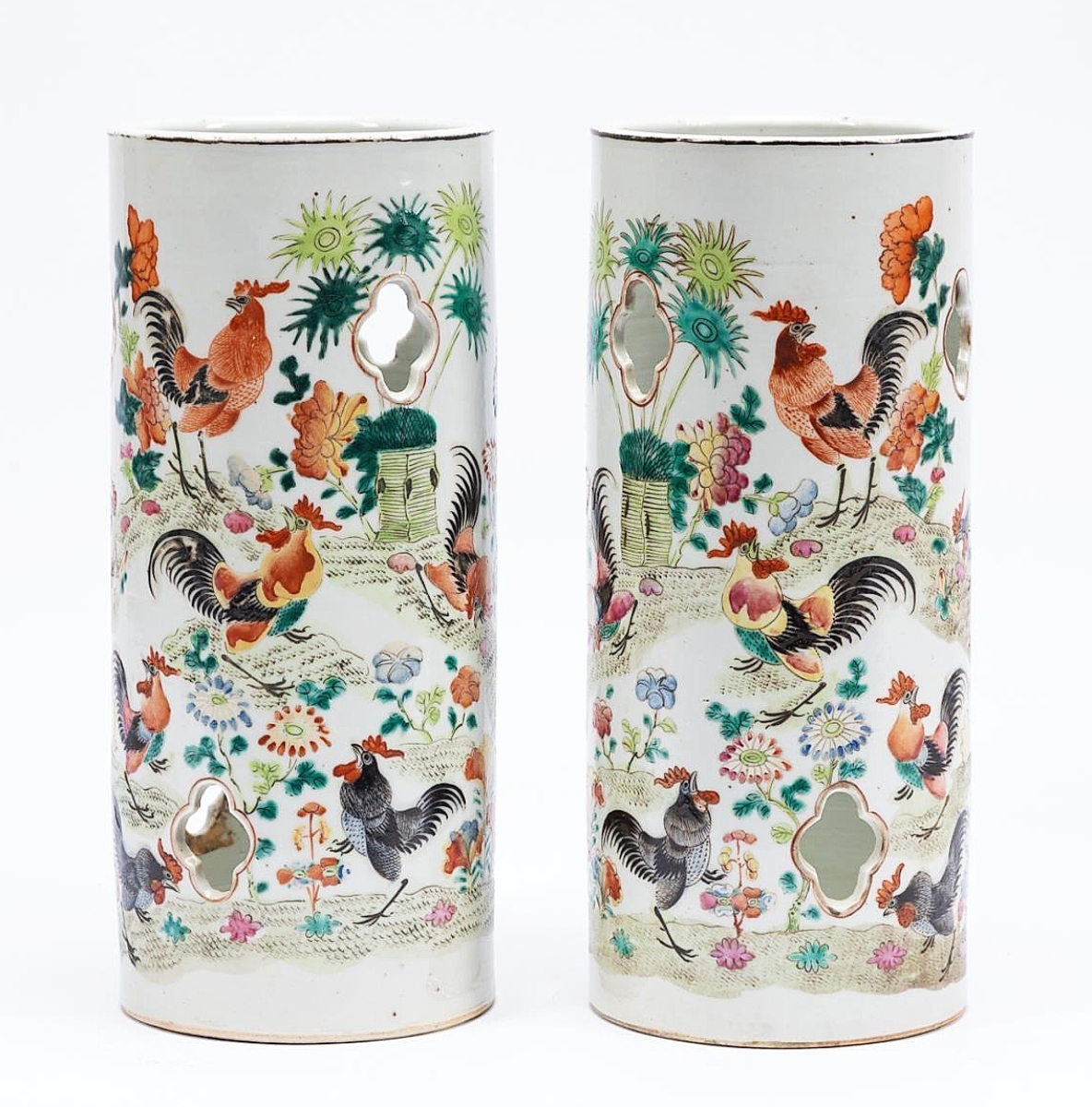 “It’s such a great way to start the day,” Elizabeth Rickenbaker said of the second lot of the day. This pair of Chinese pierced porcelain hat stands with rooster motifs sold to a buyer in China for $3,933 ($700/900). 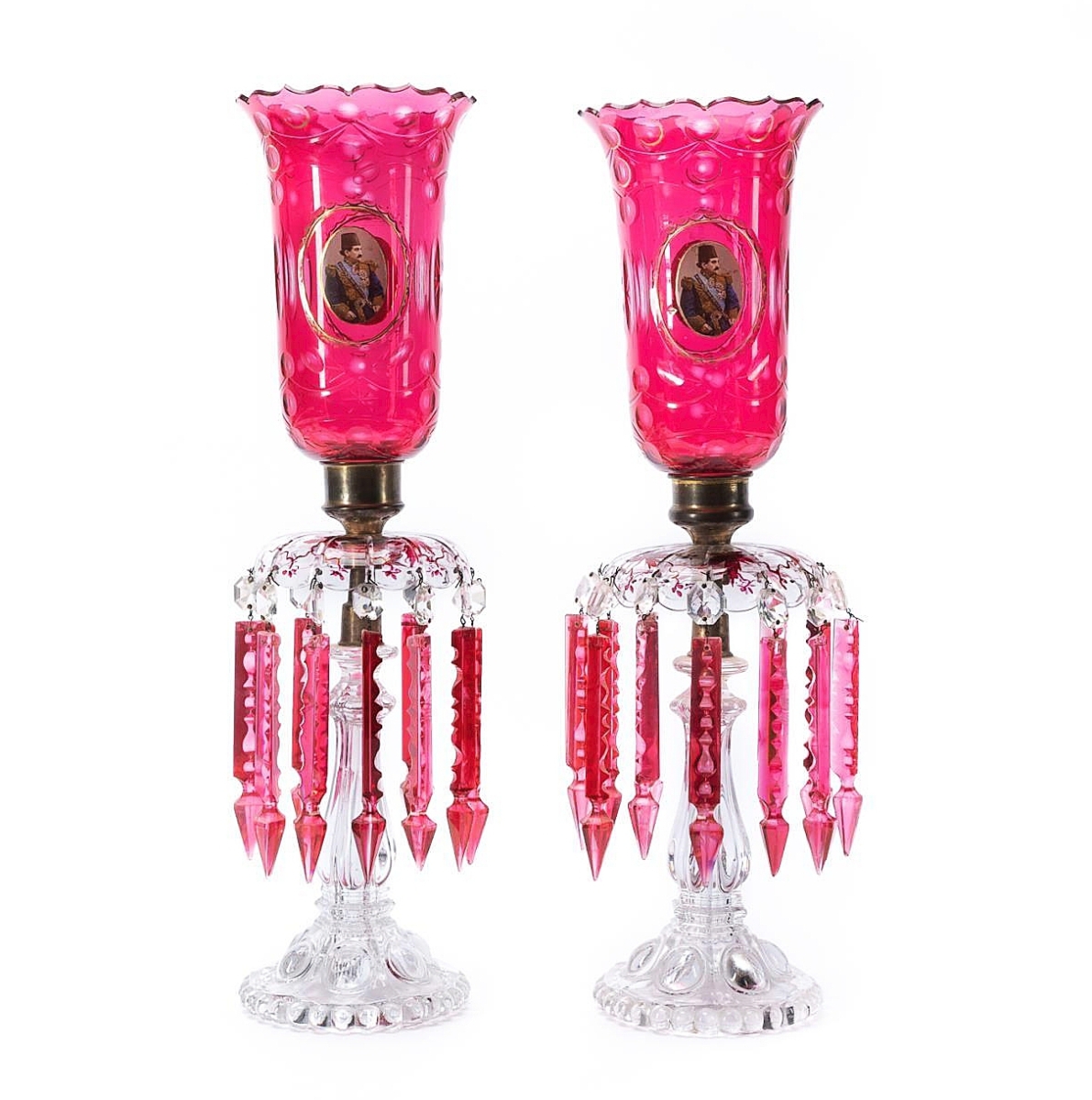 Two elements drove the price on this pair of luster candlesticks. The unusual combination of clear Baccarat “medallion” candlesticks with Moser cranberry glass shades that had been made for the Iranian market and bore portrait medallions of Naser al-Din Shah Qajar and Mohammad Ali Shah Qajar. Elizabeth Rickenbaker said a buyer who may have been of Iranian descent, now living in Canada, bought the pair for $3,630 ($800-$1,200). 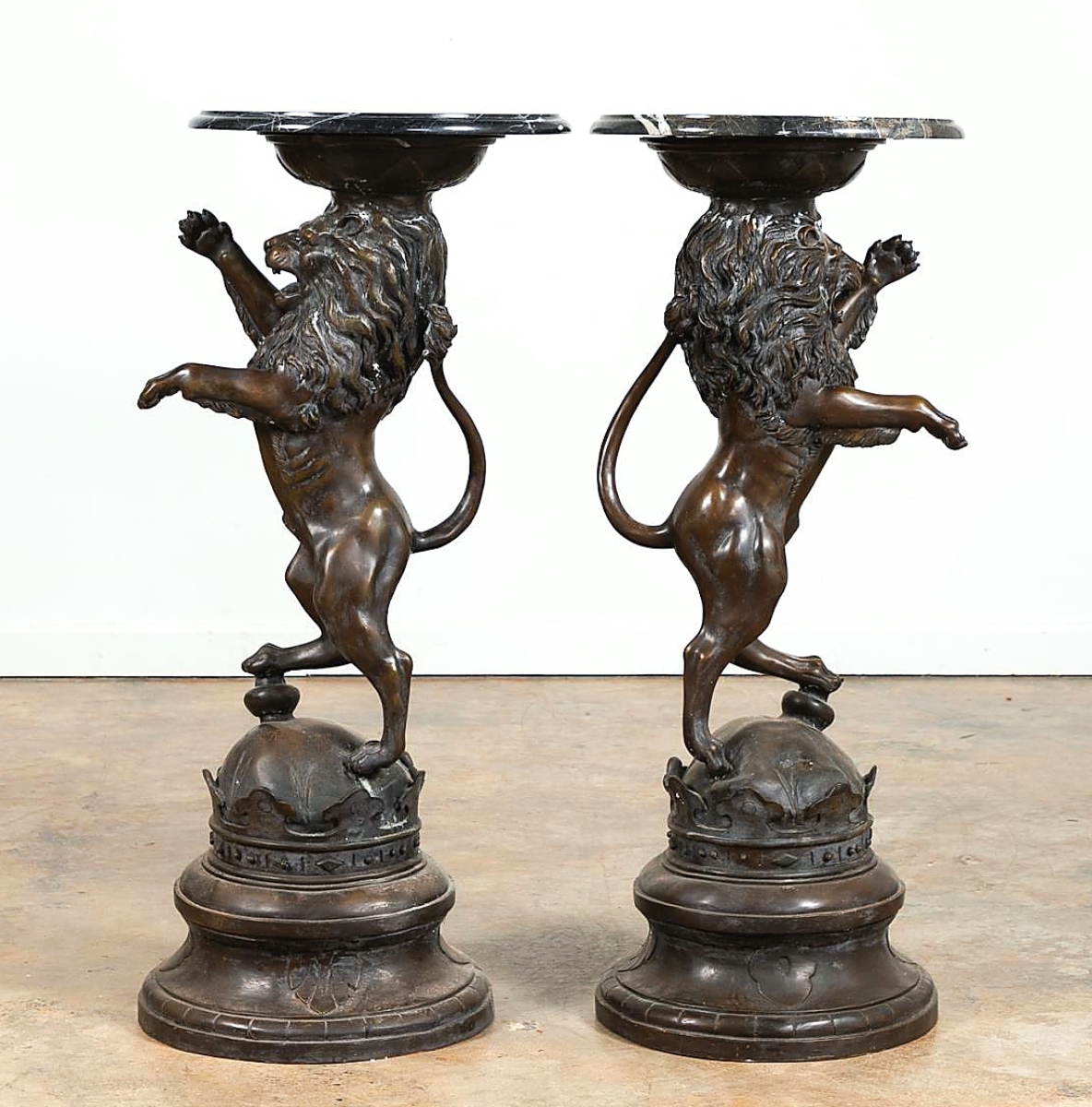 This pair of regal bronze lion pedestals with circular black marble tops are staying in the Atlanta area. The pair roared to $3,328 ($1/1,500). 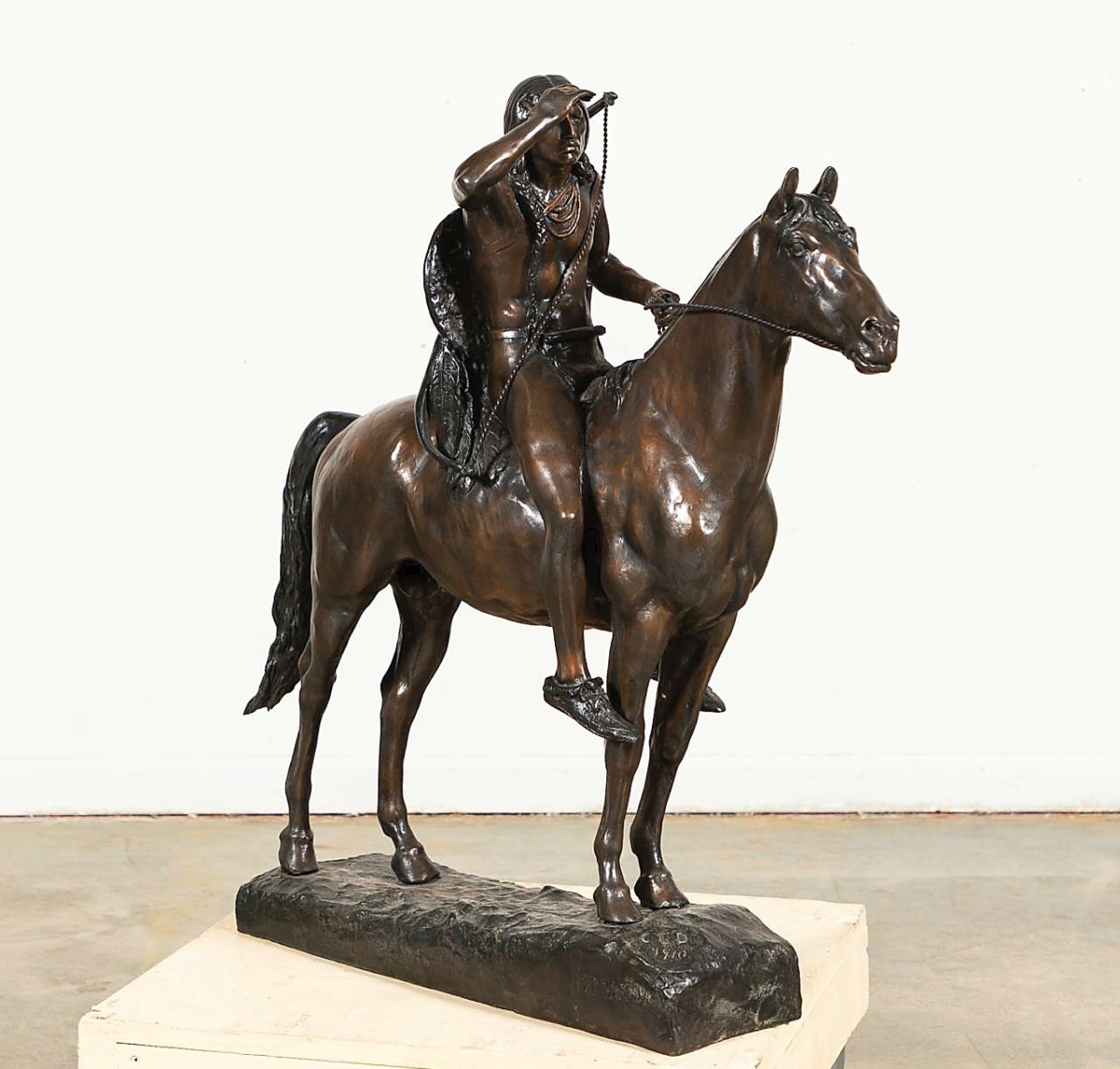 “There are a lot of collectors in Atlanta who have mountain vacation homes, so we’ve done well with Western American art,” Elizabeth Rickenbaker said. This patinated bronze titled “The Scout” by Cyrus Edwin Dallin (Massachusetts, 1861-1944) came from a Florida collection and sold to a buyer in Utah for $3,328 ($2,5/3,500).