Editor’s note: In 2019, homicides in Dallas spiked to the highest level in more than a decade. This year, The Dallas Morning News is tracking the city’s homicides, exploring the impact on families and neighborhoods, and examining the possible causes of the rise in violence. One in an occasional series. […]

Editor’s note: In 2019, homicides in Dallas spiked to the highest level in more than a decade. This year, The Dallas Morning News is tracking the city’s homicides, exploring the impact on families and neighborhoods, and examining the possible causes of the rise in violence.

One in an occasional series.

Timeria Jones was the “Alvin of the Chipmunks” of her six siblings, her family said.

“She was the heartbeat” of their family, Chamora Jones said.

The 22-year-old was killed June 2 in the Red Bird area when two men opened fire while she was waiting to get into 4th Quarter Sports Grill at 7460 S. Westmoreland Road, near Interstate 20. Three other people who were wounded had no connection to Jones, her relatives said.

No arrests have been made in the case, and investigators, who have offered no explanation for what led to the shootings, said they had no updates to share.

This year has been even deadlier than 2019, when the city exceeded 200 homicides for the first time since 2007. This year, Dallas surpassed 200 homicides in late October, a grim mark the city didn’t reach in 2019 until December.

In response to the rise in violence, Police Chief U. Reneé Hall said she would increase resources in four parts of the city. But she didn’t say where she would concentrate the resources, which include a greater police presence, citing concerns for officers’ safety.

Timeria Jones’ parents say they wish someone would speak up if they saw anything the night of the shooting.

Her mother, Deidra Jones, said her daughter had been outgoing all her life. Growing up, she was involved in gymnastics, cheerleading, dance classes, volleyball and track.

The youngest in her family, she was “the life of our parties,” said her sister Ashley Thomas.

Timeria Jones was a big fan of the Dallas Cowboys and loved to sing. She often recorded videos on Snapchat of her dancing with her mother.

She spread a lot of joy, her family said, and knew how to make everyone smile.

Despite the COVID-19 pandemic, many people attended Jones’ funeral as friends and co-workers reached out to her relatives to share the positive impact she’d had on their lives. The church was so crowded that many people had to watch a livestream from the parking lot, her family said.

“She touched so many people that I didn’t even imagine it until my baby passed,” her mother said. “Not only did we love her a whole lot, other people loved her, and that just shows me what type of person she is.”

The family has struggled to explain Jones’ death to her 2-year-old son, Casyn.

“I try to be mindful that he may not be crying for what I think he’s crying for, he may be crying because he misses his mama,” Deidra Jones said. “When he gets like that, sometimes I let him go down in her room and I let him look [at pictures]. … I let him get up on the bed, and he’ll point out a picture [and say], ‘Mama, mama, mama.’ ”

‘What did she want to say?’

The night of the shooting, Timeria Jones had left her home in Fort Worth to go out with co-workers. Her friends, who weren’t injured in the shooting, began messaging her sisters on Facebook to tell them what had happened.

In the confusion, her relatives thought she had only been wounded in the arm, so as they made their way to the hospital from their homes in Fort Worth, they hoped she was OK.

As her family gathered in the waiting room, a doctor came with a detective to give them the tragic news. 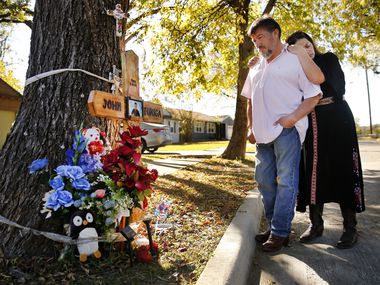 Jones’ family said they regretted that they couldn’t get to the hospital faster, as her friends told them she’d been asking for her mother.

“Anytime we need each other, we are always there for each other,” said Thomas, the oldest sibling. “I always felt like it was up to me to protect the sisters. … I wasn’t even there to hold her hand and let her know it’s going to be OK.”

A nurse told Deidra Jones that she had prayed with her daughter before she died.

“I was happy that she had somebody to pray for her and give her something that she needed before she left this earth,” the mother said. “I would have loved to have been the person to do it. … It hurts because I think about she was asking for me. What did she want? What did she want to say?”

‘I hope they have remorse’

Every Tuesday, the family and their friends post photos of Timeria Jones online, using the hashtag “TimmyTuesday.” That was something she used to do, and it has been a way to honor her memory.

For her father, Timothy Jones Sr., the memories are “like therapy.”

The family can only wait for investigators to make a break in the case — wait for someone to be brought to justice.

“I hope they have remorse, because that would make it easier,” her mother said. “I just want them to go and sit in that little cellblock and think every second by second how many seconds [they] took from us.”