When Paula Peters was in second grade in Philadelphia in the mid-1960s, listening to a teacher talk about Plymouth colony and the Mayflower, a student asked what happened to the Native Americans who helped the Pilgrims settle, the Wampanoag. The teacher said they were all dead. “When she mentioned we’re […]

When Paula Peters was in second grade in Philadelphia in the mid-1960s, listening to a teacher talk about Plymouth colony and the Mayflower, a student asked what happened to the Native Americans who helped the Pilgrims settle, the Wampanoag. The teacher said they were all dead.

“When she mentioned we’re all dead, that was devastating,” Peters, 61, recalled to TIME. “I raised my hand, and I said no that’s not true, I’m a Wampanoag, and I’m still here. I didn’t know enough then as a second grader that I could challenge her, but I think that I’ve challenged that second-grade teacher ever since. Part of my everyday being is telling people that we’re still here.”

Since then, Peters, a Mashpee Wampanoag tribe member, has promoted education about the real history behind the Thanksgiving holiday. She and her son have helped to incorporate the Wampanoag perspective into events around the 400th anniversary of the Pilgrims’ landing in Cape Cod this month. Five weeks after docking the Mayflower in 1620, the Pilgrims sailed away to find land better-suited to grow the crops they wanted, and ended up in Patuxet, the Wampanoag name for the area where they established Plymouth Colony. That contact with Europeans “brought plague and disease and pretty much almost wiped us out, so it’s not as much a cause for celebration,” says Kitty Hendricks-Miller, 62, Indian Education Coordinator at the Mashpee Wampanoag tribe. For many Wampanoag, Thanksgiving has always been considered a day of mourning because of that epidemic and the centuries of American Indian removal policies that followed.

Many Wampanoag hoped that the 400th anniversary of the Mayflower landing would be a galvanizing event to remind people that the Wampanoag still exist, but many of the commemorative events have been cancelled, postponed or moved online due to the COVID-19 pandemic. The Wampanoag to whom TIME talked all expressed a feeling of “eerie” déjà vu, marveling at how much hasn’t changed in 400 years in some respects. The tribe is in the midst of a fight for survival on two fronts: fighting to survive during a global pandemic and fighting to maintain control of their land.

Four hundred years ago, the Wampanoag were reeling from an epidemic that nearly wiped out the village of Patuxet. In 1616, before the Pilgrims’ arrival, a still-mysterious disease caused an epidemic that decimated an estimated 75% to 90% of the 69 villages that made up the Wampanoag Nation back then. Without modern knowledge of how diseases spread, Wampanoags attributed it to the supernatural spirits and gunpowder. 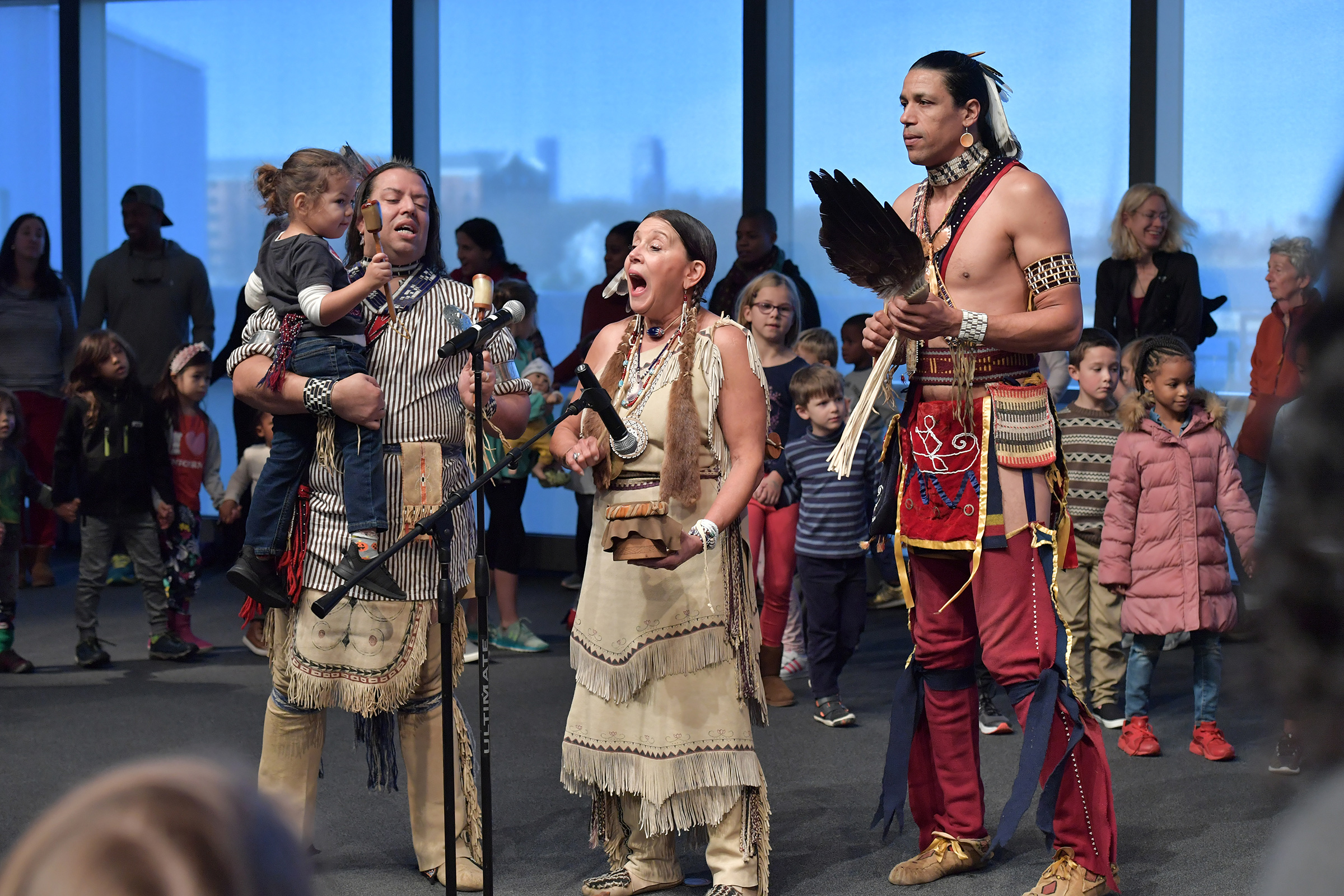 “The epidemic that decimated Wampanoag people just before arrival of Mayflower swept away a majority of their population,” says David J. Silverman, historian and author of This Land is Their Land: The Wampanoag Indians, Plymouth Colony, and the Troubled History of Thanksgiving. Initially, “a lot of native people associated firearms with epidemic disease because what they know is when Europeans show up, and fire their guns, shortly thereafter, people start dying of epidemic disease.”

Such disease outbreaks would be common in Wampanoag areas for the next 30 years or so. The Europeans viewed the decimation of the native population as akin to “God is sweeping away the pagans,” Silverman says.

“This is part of what created the vulnerability that allowed Mayflower passengers to have a place to be in Massachusetts,” says Hartman Deetz, 45, a Mashpee Wampanoag artist, educator and activist. In the early 17th century, some estimates say there were more than 40,000 Wampanoag people in New England. Now there are estimated to be 4,000-5,000. Today they make up two federally recognized tribes, Mashpee and Aquinnah—the two largest communities of Wampanoag—as well as several other tribes recognized by Massachusetts.

“It’s somewhat ironic that on the 400th anniversary of acknowledging this point in history, we are forced to stay home and stay separate and feel that fear and uncertainty and some of the things that my ancestors were dealing with in a much more severe fashion,” adds Aquinnah Wampanoag Councilman Jonathan James-Perry, 44, who is featured in an online exhibit Listening to Wampanoag Voices: Beyond 1620 hosted by the Peabody Museum of Archaeology and Ethnology at Harvard University.

The stories of disease ravaging the Wampanoag population, which so closely mirror that of the modern pandemic, are just one of many aspects that get left out of America’s Thanksgiving history.

In fact, all we know about the meal known as “the First Thanksgiving” in 1621 comes from a couple of paragraphs written respectively by prominent figures in Plymouth Colony, Edward Winslow and Governor William Bradford, suggesting to experts that it wasn’t a big deal at the time. Much of the meal’s meaning was added in the 19th century, when the nation was divided over slavery and the Civil War, as an opportunity to encourage Americans to come together under a federal holiday. A lot of the significance behind the meal has been created over the years, spawning many myths and misconceptions that Wampanoags and Native Americans in general have been debunking ever since.

“Being a Wampanoag person in this time of year, it’s always striking that we tell this story of the Pilgrims and the Indians, and yet the Wampanoag people are often times left out of this telling of this story. We are not given the decency of even having the name of us as a people mentioned,” says Deetz. 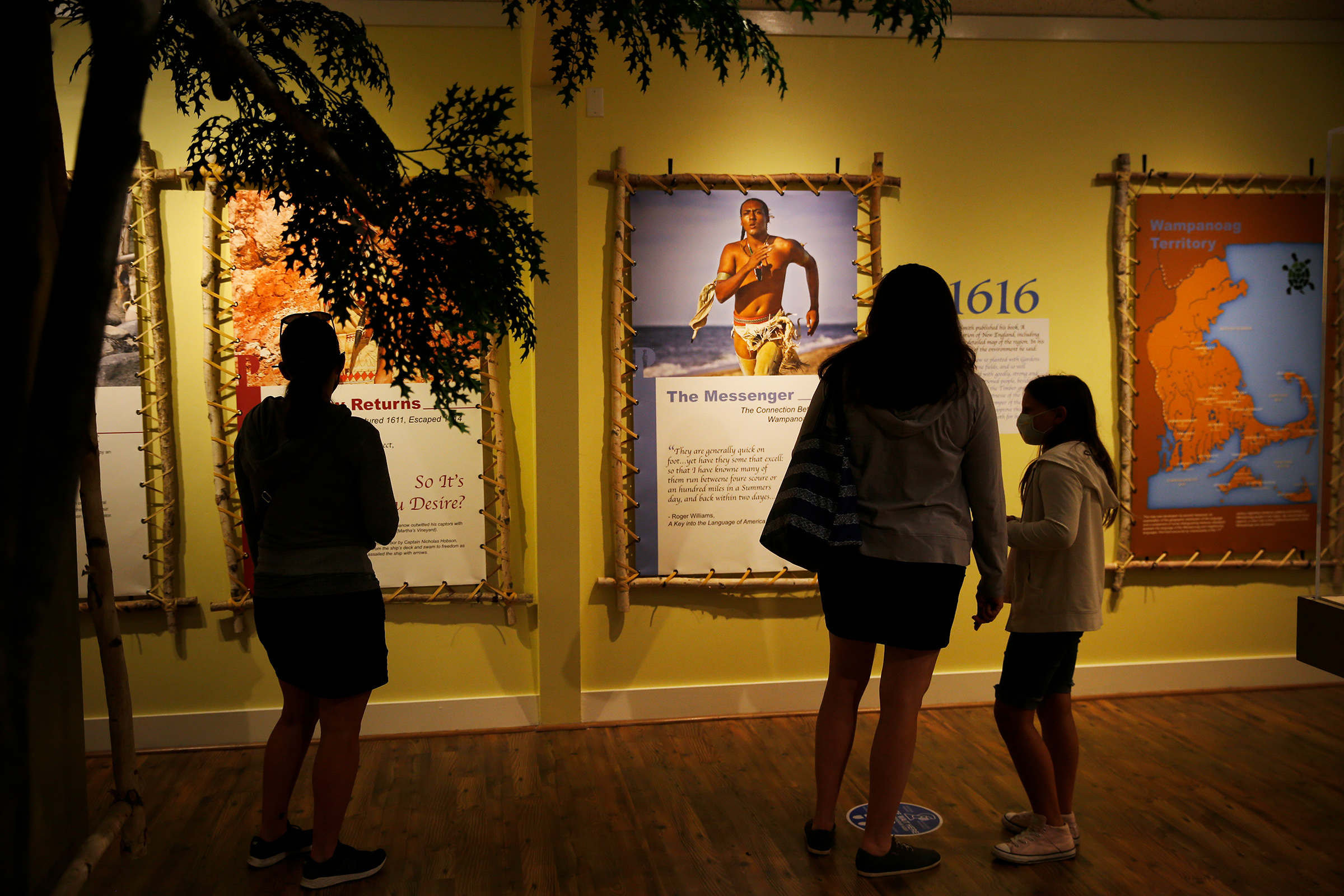 Visitors to the Pilgrim Monument and Provincetown Museum pause to examine a new exhibit about early interactions between the Pilgrims and the Wampanoag tribe in Provincetown, MA on Aug. 27.

Linda Coombs, 71, an Aquinnah Wampanoag museum educator who also participated in Listening to Wampanoag Voices: Beyond 1620 and briefs teachers on Native American perspectives of U.S. history, believes the violence after that mythical Thanksgiving meal has to be faced head on. “When the colonists came over in the 17th century, they had to get rid of us in one form or fashion or another whether it as converting us, moving us, annihilating us, or shipping us out of the country into slavery, and I just wish people knew that because this history is not yet well known, but that’s what it took for America to be what it is today and for people to sit down to have their Thanksgiving dinner.”

In late March, at the height of the coronavirus pandemic, the U.S. Department of the Interior announced that there was not a basis for the tribe’s 321 acres of tribal land in Mashpee and Taunton, Mass., to have reservation status because the tribe supposedly didn’t meet the definition of Indian. In June, a federal judge called Interior Department’s decision “arbitrary, capricious, an abuse of discretion and contrary to law,” and said the agency would have to re-analyze the question of whether the tribe is entitled to reservation land, while correcting all the errors that led to its original decision. But the matter is not resolved, and while the tribe awaits Interior’s new decision, it is hoping for permanent protection through an act of Congress. It also has an ally in President-elect Joe Biden, whose tribal nations platform indicates he’s on the side of the Mashpee Wampanoag tribe—and Biden is reportedly vetting a Native American to be Interior Dept. secretary, which could help as well.

The Mashpee tribe has also had its own challenges internally, as its chairman was arrested on Nov. 13 and charged with accepting bribes in connection with plans to build a casino.

“We are once again 400 years later, in the midst of a pandemic and in the midst of a land grab and argument over jurisdiction and the ability of colonial law to recognize the rights of the people being colonized,” says Deetz.

The Wampanoag also have a family meal on the federal holiday, but it’s one of several Thanksgivings they celebrate throughout the year, to honor different harvests. Peters usually holds a “prayer fire” in her yard, gathering around a fire pit, offering tobacco (putting it in the fire) where prayers are said to remember ancestors and express gratitude generally. This year, because of COVID-19, her family’s gathering will be smaller than usual.

The 51st annual National Day of Mourning will still take place at Plymouth Rock. It usually draws more than 1,000 attendees on Thanksgiving Day, but this year organizers are encouraging people who don’t live nearby to watch the livestream to reduce the risk of spreading COVID-19. The COVID-19 pandemic has only compounded the feeling of loss as participants remember fellow Native Americans who have died of the coronavirus, especially in the Navajo Nation.

Mahtowin Munro, 61, Lakota co-leader of United American Indians of New England, will begin fasting sundown the day before. She hopes that, just as the Black Lives Matter movement raised awareness of white supremacy, racism and attention to Black perspectives, the event is a reminder to listen to indigenous people. “When we’re there together, there is a really profound sense of solidarity and hope for the future that all of us being together and listening to one another that that can lead to a better future to everyone.”

These events are opportunities to talk about the ways people are “thriving,” not just surviving. Hendricks-Miller doesn’t like to use the word survival as much. “We’re still here,” she prefers to say, “considering all that we’ve been through. It’s kind of like a resounding mantra, we’re still here.”

Get The Brief. Sign up to receive the top stories you need to know right now.

For your security, we’ve sent a confirmation email to the address you entered. Click the link to confirm your subscription and begin receiving our newsletters. If you don’t get the confirmation within 10 minutes, please check your spam folder.

Write to Olivia B. Waxman at [email protected]