By JANET STEINBERGSpecial to the Journal & Topics “The fundamental things apply, as time goes by.”Sam, the unforgettable piano player in the classic movie “Casablanca”, made that profound statement as he pounded out the ivories and sang Bogie and Bacall’s tear-jerking song “As Time Goes By”. No matter their physical […]

By JANET STEINBERG
Special to the Journal & Topics

“The fundamental things apply, as time goes by.”
Sam, the unforgettable piano player in the classic movie “Casablanca”, made that profound statement as he pounded out the ivories and sang Bogie and Bacall’s tear-jerking song “As Time Goes By”.

No matter their physical appearance, clocks also make their own statement as time goes by. Clocks can transport you back in time or catapult you into the future. Though differing around the world, timepieces can range from medieval to modern…serious to quirky. They may be works of art…set a mood…or give a feeling about their location, their customs or their people. 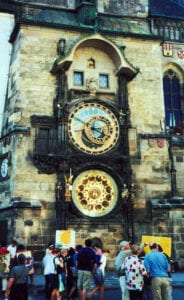 PRAGUE, CZECH REPUBLIC: On Prague’s Old Town Square, the Old Town Hall’s medieval Astronomical Clock (Prague Orloj) puts on an hourly show known as The Walk of the Apostles. The show, which never fails to draw a large audience, features miniature figures of the Apostles…plus a skeletal representation of Death…who strikes the time every hour on the hour. The mechanical clock and astronomical dial date back to 1410 and have been repaired many times over the centuries. The clock’s 600th anniversary in 2010 was celebrated with a light show on the face of the clock tower.

INDIANAPOLIS, INDIANA: The 30-foot Water Clock, in the permanent collection of the Indianapolis Children’s Museum, contains more than 40 pieces of glass and 100 pieces of metal. I’ll bow to the experts to tell you how this intriguing timepiece works. “Water from a pump in the basement, just below the clock, is pumped through a pipe running up the middle of the clock into a reservoir at the top. The water then drips down onto a scoop at the top which is connected to the green, swinging pendulum. The pendulum causes the scoop to dump the water into a series of siphons. The siphons fill and empty into the minutes’ globes. A siphon is a tube in an inverted “U” shape which causes the solution to flow up, without pumps, powered by the fall of the liquid as it flows down the tube under the pull of gravity. One minute globe represents two minutes. When all thirty-minute globes are full, they empty and an additional hour globe fills. Twice a day, at one o’clock, all of the hour globes and minute discs are full and the water empties until only the first hour globe is left full.”

HELSINKI, FINLAND: Time doesn’t stand still in Helsinki, but it does go backward in the Moorish-flavored, silver domed, 1906 synagogue. A strange-looking clock with Hebrew numbers adorns the green wall of the Jugendstil-influenced sanctuary. The hands of the clock move counterclockwise because that is the way Hebrew is written…from right to left.

LEXINGTON, KENTUCKY: The eyes are watching. If you stroll along the 100 block of W. Main Street you will find two big brown eyes staring at you. The cast iron Skuller’s clock, a Lexington landmark, debuted more than 100 years ago in front of Harry Skuller’s jewelry store. The eyes were an advertisement for an optometrist who was associated with the jewelry store. After years of disrepair, the iconic 14-foot tall clock was restored and reinstalled on September 17, 2013.

VENICE, ITALY: Although the early Renaissance Clock Tower on St. Mark’s Square dates back to the last decade of the 15th century, the mechanism of the clock has been altered. Perched atop a terrace at the top of the tower are two great bronze figures, which strike the hours on a bronze bell. Known as “the Moors” (because of the dark patina of their bronze) the contrasting youth and old age of the figures represent the passing of time. The three levels below the bell contain the Winged Lion of St. Mark, a semi-circular gallery with statues of the Virgin and Child, and the blue and gold clock marble face engraved with the 24 hours of the day in Roman numerals.

FRANKFORT, KENTUCKY: Time never stands still in Kentucky’s State Capital. The show-stopping Floral Clock measures the time with giant hands weighing about a quarter of a ton each (a 20-foot long minute hand, a 15-foot hour hand) and approximately 20,000 flowers that adorn the clock’s face. The 34-foot wide Floral Clock was once a political pawn deemed the “weed clock” by a rival politician. What sets this floral clock aside from others is the fact that, instead of resting on a bank of earth, it whiles away the time high in the air suspended above a reflective pool of water glistening with goldfish. Frankfort’s Floral Clock, a major tourist attraction, not only marks the time of day but also marks the seasons of the year with a quarterly change in the plantings. Two red flower cardinals (the state bird) are featured in a Spring planting of the clock.

PORTLAND, MAINE: You‘ll need deep pockets for this three-foot pocket watch. The watch, that hangs over the door of Swiss Time in Portland’s Old Port, has hung around New England watch shops since the late 1800s. The sign traveled to Portland in 1977, in time for the startup of Swiss Time, a family-owned boutique watch and clock shop. In 2014, when the sign got a much-needed facelift, its design was based on one of the best American Pocket Watches…a Hamilton Railroad Open Face Pocket Watch.

NEW YORK, NEW YORK: The Tourneau Time Machine at 57th and Madison in New York City is the right place for the right time, even if you never enter the store. The exterior façade of the city’s flagship store displays a plethora of clocks that display times around the world. When this 16,000-square foot timepiece emporium opened in 1997, Guinness World Records recognized it as the ‘World’s Largest Watch store. However, that title was surpassed by Tourneau’s Las Vegas store when the Tourneau Time Dome opened in 2005.

VANCOUVER, BRITISH COLUMBIA: The Gastown Steam Clock, standing on the corner of Cambie and Water Streets, was designed and built by horologist Raymond L. Saunders who stated, “The world’s first steam-powered clock has been created for the enjoyment of everyone.” Live steam winds the weights and blows the whistles. Handmade enameled copper dogwood flowers highlight the four clock dials. A 24-karat gold plated frame surrounds the dials that glow at night. The steam manifold for the five whistles sits on top of the dial cube. The steam is supplied to this two-ton clock by the underground system of Central Heat Distributors Limited.

So, pack up your bags and seek the time of your life. There’s a great wide wonderful world waiting for you out there. Yes, take it from The Rolling Stones: “…time waits for no one, and it won’t wait for thee.”