Here’s what you need to know about the devices

CLOSE Safely and anonymously surrender healthy infants with Safe Haven Baby Box at Decatur Township Fire Department No. 74 starting July 1, 2018. Indianapolis Star Passing by one of dozens of fire stations across Indiana, drivers might spot a discreet door built into the outside wall of the building. The box, […]

Passing by one of dozens of fire stations across Indiana, drivers might spot a discreet door built into the outside wall of the building. The box, like other tools inside the firehouse, exists to save lives.

Safe haven baby boxes are devices made with the intent of saving infants surrendered under the state’s safe haven statutes, with the hopes of avoiding the tragedy of discovering a baby’s body in a dumpster or wooded area.

The boxes allow an adult to place the baby in a safe place with anonymity. They are temperature-controlled and include several silent alarms to alert the first responders inside the building.

Keeping others from making same mistake: Alexander was born — and died — in a dorm bathtub. From prison, his mom tells her story.

While these baby boxes have been used to rescue infants in communities in Indiana and elsewhere, they’re not without controversy. Here’s what you need to know about the devices.

What is Indiana’s safe haven law?

Indiana’s safe haven law allows for the anonymous surrender of an infant 30 days old or younger without prosecution. Infants may be surrendered at fire departments, hospitals and emergency medical services stations. So long as there are no signs of intentional abuse or neglect, the person surrendering the child is not required to provide any information.

The law was updated during the last legislation to allow adults to call 911 and ask that an emergency services provider take custody of the child. Known as Safe Haven 911, the legislation still allows the caller to remain anonymous, but does require they stay with the child until that service provider arrives.

At least 57 infants have been surrendered under the safe haven statutes since 2008, according to data provided by the Department of Child Services, including four so far this year.

What’s a safe haven baby box? How does it work?

Developed by Monica Kelsey, who learned as an adult that she had been abandoned at a hospital after birth, safe haven baby boxes are devices installed in an exterior wall of fire stations or hospitals that allow for the anonymous surrender of an infant. The first box was installed at a fire station in Woodburn, Indiana, near Fort Wayne, in 2016.

The device is a two-way box, with a door inside and outside the building. The boxes are temperature controlled and programmed with several silent alarms to alert first responders. A silent alarm is triggered when the outside door is opened, when the baby is placed in the bassinet and again when the door is closed and automatically locked. 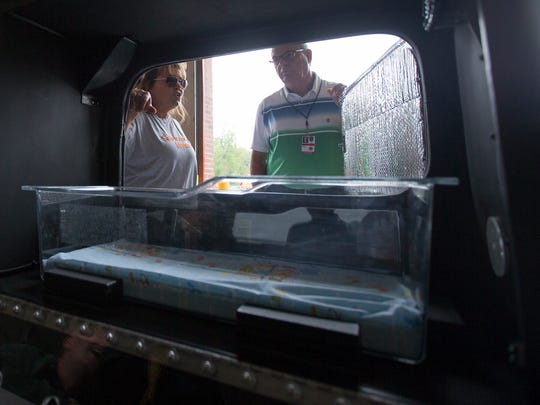 A look inside the Safe Haven Baby Box that will be effective as of July 1, 2018 at Decatur Township Fire Department No. 74. The box is meant to deter infant deaths by allowing people to anonymously surrender their healthy newborn baby without fear of criminal prosecution.  (Photo: Ebony Cox/IndyStar)

First responders retrieve the baby from inside the building and transports the infant to an area hospital for medical evaluation. The Department of Child Services then assumes custody of the child.

Yes. In 2017 and 2018, babies were surrendered in a box at a Michigan City, Indiana, fire station. Delays in construction meant a box was still not ready when a baby was surrendered at Decatur Township Fire Department on Indianapolis’ southwest side in 2018. The infant was found healthy.

Six babies were surrendered in baby boxes last year, according to the organization’s annual report.

How many baby boxes have been installed? Where?

There are over 70 baby boxes across Indiana, as well as several in Ohio, Arkansas and Florida.

To see a complete list of locations and addresses, visit shhb.org/locations. The organization also encourages those looking for a box’s location or licensed counseling to contact the National Safe Haven crisis hotline at 1-866-99BABY1.

Why is there a footprint on every box?

The footprint emblazoned on each box belongs to Baby Amelia, an infant found abandoned in Eagle Creek Park just days after Christmas 2014. Her body was discovered about 30 yards from a parking lot, wrapped only in a blue sweatshirt. 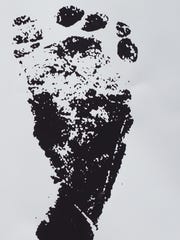 The footprint of Amelia Hope on the Safe Haven Baby Box who was abandoned in Eagle Creek and found December 28, 2014. (Photo: Ebony Cox/IndyStar)

Linda Znachko, the leader of He Knows Your Name Ministry, became the girl’s guardian after her death, named her and arranged for her burial. Znackho is now heavily involved in raising awareness of the state’s safe haven law and baby boxes.

Not everyone supports the use of safe haven baby boxes.

In 2015, before their use approved by state legislators, the Commission on Improving the Status of Children in Indiana unanimously decided not to recommend statewide use of the boxes, citing concerns about cost and potential liability. Legislators approved expanded use of the baby boxes in 2018, so long as they are located at fire stations staffed 24 hours a day.

Massachusetts-based Baby Safe Haven New England has been vocal in its opposition to the use of baby boxes, claiming they are illegal and unsafe.