INDIANAPOLIS — Julian Blackmon knew exactly where Joe Burrow was going to go with the game on the line. The Colts rookie free safety has been brilliant so far this season, aggressive and opportunistic, with a penchant for coming up big in the clutch. But this time Blackmon knew where […]

INDIANAPOLIS — Julian Blackmon knew exactly where Joe Burrow was going to go with the game on the line.

The Colts rookie free safety has been brilliant so far this season, aggressive and opportunistic, with a penchant for coming up big in the clutch.

But this time Blackmon knew where Burrow was going because the Indianapolis defense had struggled so much to defend that particular area of the field for most of a 31-27 comeback win over the Cincinnati Bengals, a team that proved this Indianapolis defense is still a long way from proving itself as elite.

“I definitely had a feeling that he was going to go back to the slot,” Blackmon said. “All game they were hitting that for yardage, just trying to get him comfortable in the offense, giving him easy throws.” 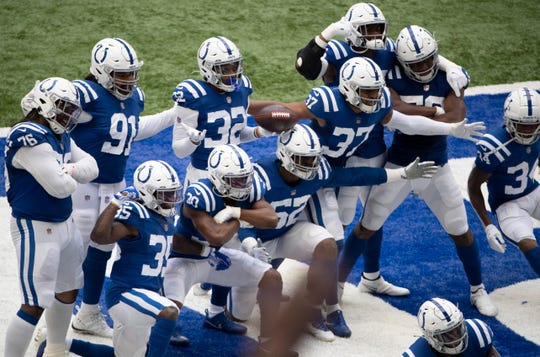 For the second consecutive week, the top-ranked Colts defense failed to stop just about everything in the first half, digging Indianapolis (4-2) into a deep, deep hole.

By the numbers, the Colts had the NFL’s No. 1 defense coming into Sunday’s game and likely will still be at or near the top of the standings as they head into the bye week.

When the Colts come back off the bye, they’ll be getting ready to face the Lions, Ravens, Titans, Packers and Texans, teams that have quarterbacks ranging from elite to explosive to experienced. Sometimes all three.

If they’re going to slow down or stop those quarterbacks, they’ve got to be better right from the jump.

The absence of Darius Leonard, who’s missed the last two games with a groin injury, is playing a factor. Leonard has become one of the league’s best linebackers in coverage, capable of covering the ground, and the Maniac persona he adopts on the field brings the “juice” Buckner is talking about.

Beyond the juice, though, the passing game has been the big problem.

Indianapolis had its issues in the first half, but for the most part, the Colts were unable to put consistent pressure on Burrow and found themselves victimized by Cincinnati’s fleet of big, athletic receivers. Burrow completed 9 of 15 throws in the first half for 164 yards, setting up three touchdowns and a field goal.

“We just had to get back to relaxing, how we play Colts defense,” Blackmon said.

For the second consecutive week, the pass rush started to make its presence felt in the second half, the Indianapolis defense bowed its back and the secondary started making plays on the ball. Buckner overwhelmed the interior of the Cincinnati offensive line, piling up four quarterback hits, two tackles-for-loss and a fourth-quarter sack.

But Cincinnati was still moving the ball some. The Bengals rolled up 398 yards of total offense — the most Indianapolis has given up this season — and Burrow, the rookie, threw for 313 yards on the NFL’s No. 1-ranked passing defense. Kicker Randy Bullock missed a go-ahead 48-yard field goal after the Bengals drove 58 yards, and Cincinnati was driving again in the final minutes with a chance to ruin the Colts’ comeback.

That’s when Blackmon made his play.

The rookie from Utah has been so much better than he was expected to be to this point in his career. Blackmon tore his ACL in the Pac-12 Championship Game; the Colts initially thought he might just be making his way back into the lineup at this point in the season, rather than starting and sealing games for them.

Blackmon’s aggression and nose for the ball have overwhelmed all of those expectations.

That spot in the middle of the zone, the one Burrow and the Bengals kept hitting on Sunday, has been the Achilles heel for defensive coordinator Matt Eberflus’ scheme through his first three years, the spot good quarterbacks always attacked.

Blackmon’s aggression, the way he drives down on those plays to either make a hit or break up the pass, has helped close it at times this season, most notably on a key interception late in a win over the Chicago Bears.

The Colts defense already knows it can trust the rookie playing the last line of defense.

“He’s a playmaker,” Buckner said. “You gain so much trust in a guy like him. He’s only a rookie, and he’s out there making a difference.”

Blackmon hadn’t been able to make much of an impact on that spot, that soft hole in the middle of the zone, on Sunday.

Not until it mattered most.

Then he correctly assumed that Burrow would go back to that spot with the game on the line, read it easily and slid into the spot for the game-clinching interception, the kind of play that provided some redemption for a defense that has shown some cracks the first two weeks.

For several stretches of Eberflus’ defense, the Colts have been at their best on that side of the ball when they’re fighting, when they’re making key plays at key moments like the one Blackmon made to seal the win on Sunday.

If this Colts defense wants to live up to its ranking and prove its among the NFL’s elite, though, Indianapolis has to put teams like the Bengals in the grinder from start to finish.