Retail entrepreneurs are an optimistic bunch who live to share their creativity and good taste with the rest of us, but this year they’re struggling. Shops have toiled through a pandemic that delivered eight months of double-digit percent, year-over-year sales declines. At the same time, they’re spending more to keep […]

Retail entrepreneurs are an optimistic bunch who live to share their creativity and good taste with the rest of us, but this year they’re struggling.

Shops have toiled through a pandemic that delivered eight months of double-digit percent, year-over-year sales declines. At the same time, they’re spending more to keep themselves, their employees and their customers safe from the spread of COVID-19.

Almost one in five, or 17%, of small retailers in Dallas-Fort Worth had closed permanently by the end of October, according to new data from Womply, a firm that tracks small business transaction data collected by software and business services providers.

Many are holding on with smaller staffs, online selling, curbside and deliveries and personalized service to devoted customers.

Others pushed ahead to make it to November and December. Some have even opened new stores in time for the holiday season, a period in normal times when they could count on their businesses turning positive for the year.

Nickel & Suede, based in Missouri, decided to make the leap to Dallas knowing the brand has strong online customers here. The Linen Boutique owner talked one of her main suppliers into opening a popup for the holiday season in a recently vacated space next door. And a new store, Game Day Style, is a spinoff of a successful niche category that opened in a location too hard to pass up.

Heading into the holiday season, the average weekly revenue at D-FW’s local retailers is down 14% year-over-year, according to Womply.

“It’s difficult for businesses to weather this storm for a long period of time,” said Brad Plothow, vice president at Womply. “At this point, small businesses are relying on people to spend locally.”

That seems to be a prevailing view in 2020, both anecdotally and in surveys, as consumers watch businesses in their neighborhoods close.

Carley Seale, longtime owner of Favor the Kind on Henderson Avenue and Roam at Preston Royal in Dallas, said business is starting to trend up toward what it was last year.

She attributes some of that to customers saying they want to shop small and local.

Last Saturday, she monitored the door, allowing only 18 people in at a time at Favor the Kind. She was nervous that shoppers would balk.

But when she apologized for the wait, they said they were glad that the store is taking precautions. “Then the whole line would start gabbing, 6 feet apart, about the weather, or our kids, who has or hasn’t put their tree up already, or how we’re each surviving all this,” she said.

The forced spring shutdown “made us very stealth,” Seale said. “We streamlined every part of our small business, but especially in our buying practices.”

She said smaller local suppliers have become more reliable than bigger vendors during the pandemic. The large vendors mostly respond that they aren’t sure when shipments are coming.

“Navigating unknowns is an added challenge, as we can’t afford to roll the dice on maybes,” Seale said. She’s gotten better service from a small local candle vendor, she said, and she’s finding local suppliers in other categories.

“Our market is surviving because the most creative, most flexible and most eager are pushing through,” she said.

Here are three retail entrepreneurs who decided to take on some risks to get them over to a post-pandemic world.

The Pillow Bar has opened a popup shop for the holiday season for the first time.

Merrimac Dillon, who owns the Dallas-based pillow and bedding manufacturing company and wholesaler, said it wasn’t her idea.

Joanne Walgren, owner of The Linen Boutique and a longtime customer, called Dillon to suggest the idea after space opened up next to her store in the Pavilion Shopping Center on West Lovers Lane.

The Pillow Bar sells a lot more than pillows, and Walgren suggested that her customers would welcome seeing all of Dillon’s lines, which include gifts, bathrobes, pajamas and boyfriend shirts, in a shop next door.

The company supplies more than 300 retailers nationwide, including local stores and national chains Neiman Marcus, Bed Bath & Beyond and Dillard’s, “but no one carries our entire line,” Dillon said. Set-up was easy with signs, furniture and displays she uses for a wholesale market showroom sitting at her Design District office. Walgren’s staff is running the store, and Dillon’s orders are up.

While she doesn’t want to expand into the retail business, she said the pop-up store “has been a gift.”

“We jumped at the space,” Cobb said.

What she sells is not your basic fan shop apparel. Cobb and her staff make one-of-a-kind pieces out of apparel from vintage NFL teams, other professional leagues and college team apparel. They reimagine pieces by using distressed cuts, patches or bleaching to turn shirts, jackets and pants into something new again.

Those pieces are now surrounded in their own space with vintage items for sale such as cufflinks, old softballs, helmets, bats and travel trunks. The store has a full-size scoreboard suspended from the 20-foot ceiling, and also displays some vintage Cowboys items, Wheaties boxes and a sideline camera that aren’t for sale.

So far, so good, Cobb said. “We really wanted to take advantage of the NFL season.”

“Dallas is our third-largest market and it feels right, like a cool older sister of Kansas City,” said Kilee Nickels, founder of the handcrafted leather jewelry company she started in 2014.

She signed a lease for a Nickel & Suede store in the West Village before the pandemic and decided to move forward, confident that she could build the business from her customer base here.

“It’s been a slow start, but we have a little better foot traffic every week,” Nickels said. “We have a core online business and we are grateful now that we hadn’t ventured too much into retail.” The company’s two other stores are in Kansas City.

Her signature pieces, leather earrings, make a big statement but are light on the earlobe vs. other materials, Nickels said. “You forget you have them on.”

The earrings are made in Kansas City out of leather from Italy.

Before the pandemic, hundreds of women would come shop at the brand’s annual warehouse sale in Kansas City. This year they packed up three to five pairs of earrings and created “luck of the draw” boxes that customers could buy online.

After that sale, people were swapping them on Facebook. 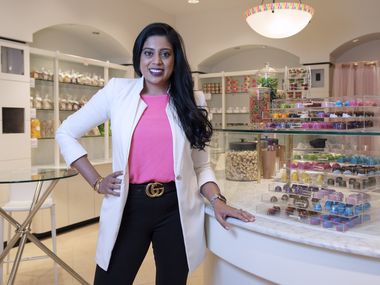 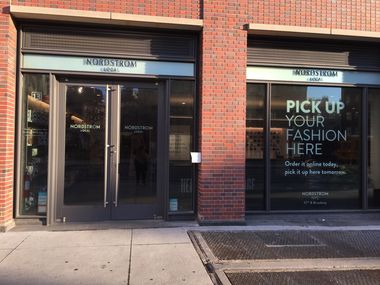 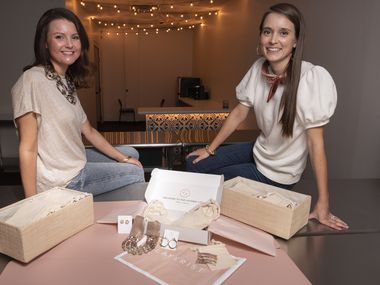