Farmington Hills — Now that Lordstown Motors Corp. has the financial backing it needs, the electric vehicle startup is hoping to beat its competition to market by delivering its electric truck by next September. Northeast Ohio-based Lordstown Motors and DiamondPeak Holdings Corp., a special purpose acquisition company, completed a merger that makes the […]

Farmington Hills — Now that Lordstown Motors Corp. has the financial backing it needs, the electric vehicle startup is hoping to beat its competition to market by delivering its electric truck by next September. 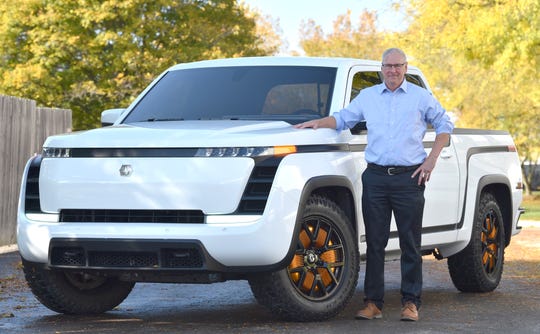 Lordstown Motors CEO Steve Burns plans to deliver that truck as automakers Rivian Automotive Inc., Tesla Inc. and General Motors Co. plan to bring their own electric truck offerings to market around the same time. Yet Americans are still loving their big, gas-powered pickups and SUVs, with those sales leading multiple brands and providing support for the expensive electric plans automakers are trying to fulfill.

To stand out from the competition, Burns has pushed his truck into the commercial lane, gearing the $52,500 Endurance toward fleet customers from municipalities to utility companies.

“We don’t see anybody in our lane,” Burns said in an interview at company offices in Farmington Hills. “There is nobody with a full-size truck for workers priced in this range, and it is hard to get a lane to yourself in modern-day automotive. Nobody’s playing in this lane right now and we plan to claim it, own it and lead it.”

Lordstown Motors purchased GM’s former Lordstown Assembly Complex near Youngstown, Ohio, last fall. Since then, the company has been working to get the financing to take over a more than 50-year-old auto plant and prepare it for the launch of an electric vehicle.

The merger with DiamondPeak will provide $675 million of gross proceeds that will be used to fund production of the Endurance. GM invested $75 million in the startup. Lordstown Motors also received backing from institutional investors, including Fidelity Management & Research Co. LLC.

“It gives us the financial acumen to be able to get this done,” Burns said of the merger, noting that he chose to go through a special purpose acquisition company rather than a traditional public offering because it’s faster. “Since we’re in a race to be first, it was really important for us to get that funding, so that we could be assured of production by September.”

To stand out, Lordstown Motors CEO Steve Burns is aiming the $52,500 Endurance at fleet customers from municipalities to utility companies. (Photo: Todd McInturf, The Detroit News)

The Endurance truck utilizes a four-wheel drive hub-motor system, which reduces the number of moving parts. There’s a motor at each wheel, with no transmission or axles. That makes it easier to build and maintain.

Lordstown Motors claims its truck can go 250 miles on a full charge, and gets the equivalent of 75 miles per gallon. By comparison, the recently revealed $112,595 Hummer EV claims to get 350 miles on a charge, and the $80,000 Rivian R1T claims to get 400 miles. But Lordstown Motors is focused on cost for its fleet customers and batteries are where a lot of that cost comes in.

Each wheel is installed over a hub motor that propels the pick-up truck. There are not axles, gear boxes, drive shafts or transmissions, making the vehicle more efficient and powerful.  (Photo: Todd McInturf, The Detroit News)

“Everybody says, ‘Why the hubs?’ This is our way to build a very robust vehicle,” Burns said. “Fleets are very cost-centric. They buy on total cost of ownership, so when we can tell them look, same initial purchase price and you start making money the first day off gas and maintenance savings, that’s compelling.”

There are features on the Endurance specific to the needs of fleet customers, like an onboard power export, allowing workers to run power tools at a job site without the need for a portable generator or to leave the truck running. The interior has a simple, clean look with a screen across the dash. 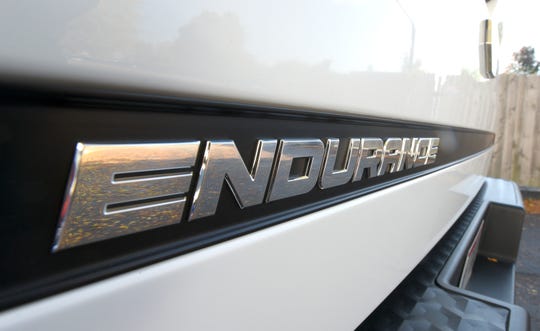 Lordstown Motors has received 40,000 pre-orders for the truck. The Lordstown, Ohio, plant used to pump out more than 400,000 Chevrolet Cruzes a year, but Burns says they could make closer to 600,000 Endurance trucks there because they have a more simplified build.

But the question remains if the demand will be there for that. Burns was surprised when he got up to 40,000 orders. Now he’s got to make more vehicles faster than expected, and he’s hired about 200 folks to help make it happen, including former Tesla Inc. employees.

John Vo, head of propulsion systems for Lordstown Motors, is one of those hires. He worked at Tesla for seven years before leaving to start his own company and was then recruited by Burns to join him in the new venture. Being a part of another electric vehicle startup like Tesla, Vo said, was “very compelling.”

Darren Post, vice president of engineering for Lordstown Motors, worked for Karma Automotive and other startups after retiring in 2012 from GM, where he ran car programs. The technology and business plan to focus on fleets at Lordstown Motors attracted him.

“I already had the experience with the fleet and commercial markets from a past startup,” he said, “and I saw they were so excited about it and it’s like a perfect match.”

Burns thought it would be harder to attract “high-end folks,” he said. “Well, we’ve been able to get the best of the best. It’s not too hard to see now that electric is the future, so a lot of people want to get into the future.”