Mike McGrath mans the helm of the 1934 Pirsch Pumper. McGrath, a mechanic, helped restore the pumper. (Photo courtesy Brian Lazzaro) In modern annals of Park Ridge volunteerism, it would be hard to find a more dedicated helper than Mike McGrath, whose long career in the Public Works Department was […] 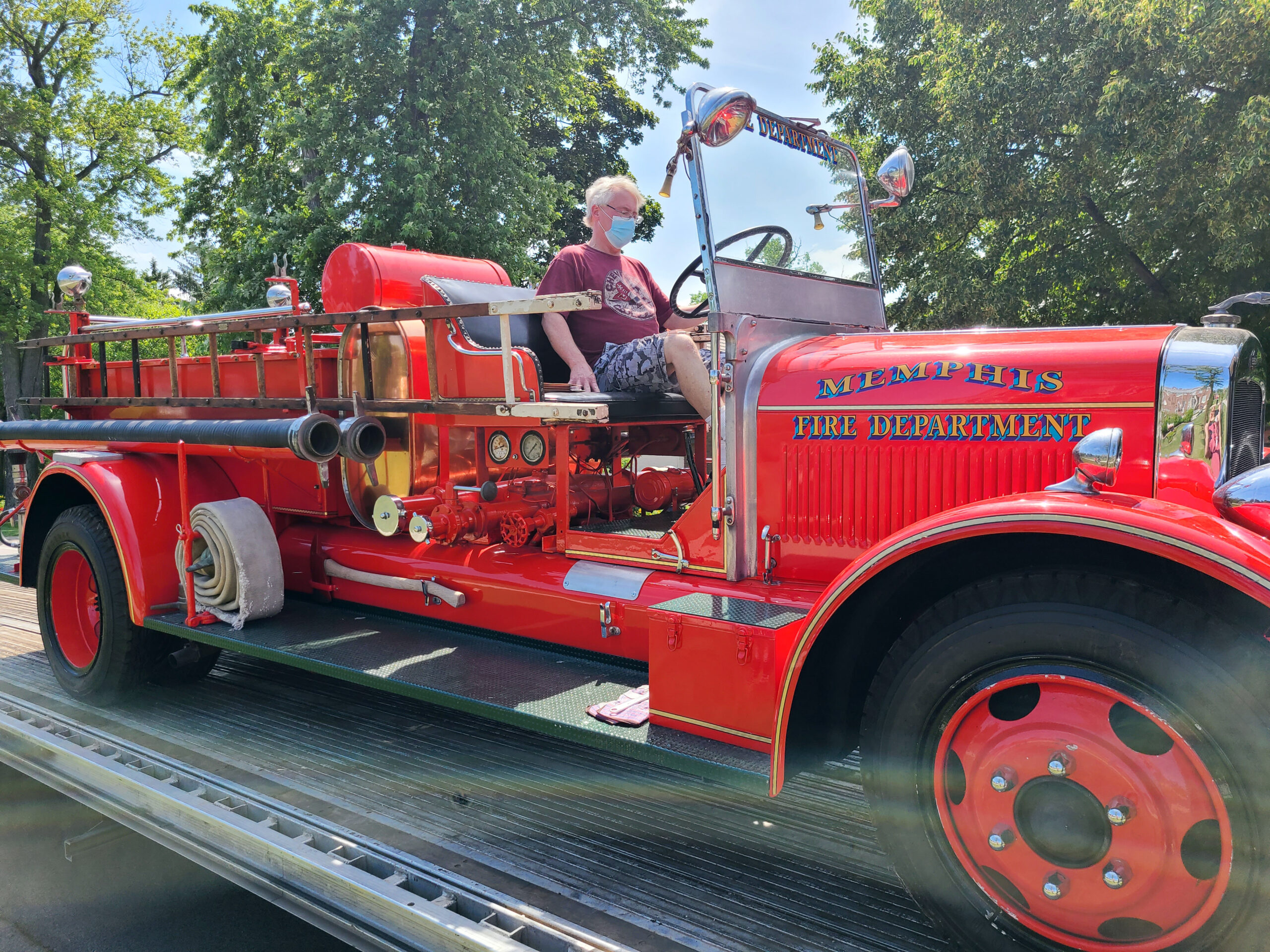 In modern annals of Park Ridge volunteerism, it would be hard to find a more dedicated helper than Mike McGrath, whose long career in the Public Works Department was equaled by his generous investments of his free time which made many community projects function more smoothly.

Michael John McGrath, died at his Park Ridge home on Aug. 4. Visitation was held Monday, Aug. 9 at Cooney Funeral Home in Park Ridge. Services and interment will be private.

He is survived by his daughter, MacKenzie McGrath; sisters Kelly (Bob) Grotthuss, and Bunty McGrath. He was the uncle of Michael (Erica) McKirchy and Heather Grotthuss. He was preceded in death by his parents Michael and Isabel (Ahern) McGrath.

His official career was 40 years in vehicle maintenance for Public Works, joining the department on June 25, 1978 and retiring June 22, 2018, as a “Public Works Supervisor” in the “Public Works Vehicle Maintenance” division.

That translated into knowing every vehicle in the city’s fleet, from fire tricks and police cars to street sweepers, ditch diggers and snow plows. Public Works Superintendent  Wayne Zingsheim knew McGrath would know the challenges they had faced in maintaining every vehicle, tracking replacement parts and when further repairs were beyond hope.

When the Park Ridge Historical Society rescued the city’s former “Lil’ Pirsch” fire truck last year, arranging to buy it back from the Memphis, TN, fire department, they had depended on the late Ralph Bishop, Park Ridge’s fire department historian, and what he remembered of its original acquisition by Park Ridge in 1921 and its 1934 updating with “modern” parts in 1934 by the Pirsch company.

In his time, Bishop had done repairs and used the pumper truck before it was sold, but knowing he would be in his 90s when it might be returned, the society needed to find an expert and younger mechanic.

McGrath said he had first started working on Park Ridge fire trucks and all the other vehicles when he was a teenager. He came to Historical Society board meetings to update the board and encourage the project. He helped the society track down new rims and tires for the truck.

The society posted photos of the Pirsch arriving back in Park Ridge perched atop a flatbed truck.

Project organizer Brian Lazzaro was impressed that McGrath fearlessly backed the pumper off the flatbed truck after it arrived, because the Pirsch did not have working brakes any more.

Videos of McGrath and that daredevil downhill drive are posted on a fundraising website at www.parkridgefiretruck.com.

Mechanical and safety improvements had to be finished before the finishing touches of cosmetic bright red paint and gold leaf could be added, but McGrath had managed most of the hard parts of the repair.

The Historical Society honored McGrath with a special award this spring. Lazzaro said one of his last contributions was to install new wheels, rims and tires, on the day he died.

“Mike inspired me because he loved this town and he freely donated his money to local charities and causes and more importantly his time and expertise,” Lazzaro told the Journal. “What a wonderful man. He will be missed.”

When McGrath wasn’t repairing vehicles, he found other ways to volunteer, helping with Kiwanis Club dinners or pitching in serving at the Sunday Suppers, a project shared by groups like the Chamber of Commerce.

The chamber’s annual Night of Community Stars had already recognized McGrath at its 2011 awards dinner. This month as the 2021 displays of decorated “Community Stars Shining Brightly” are installed as public art around the city, look at the front steps of City Hall. A star, decorated with inspiration from Vincent Van Gogh’s starry nights, has been dedicated to McGrath by the Park Ridge Chamber of Commerce.

He could be found helping the Taste of Park Ridge committee. He was an organizer of the city’s early recycling drives at the Public Works garage, projects shared between the chamber of commerce and the Maine Township leaders.

Chamber Executive Director Jackie Mathews says that McGrath had become a member of the Holiday Lights Committee, volunteering time to go out early when decorations were being installed to help facilitate the installation.

In 2020 when the Taste had to be cancelled because of COVID restrictions on crowds, the chamber and its Winterfest celebration worked with the Taste committee to organize a drive around town with Santa Claus and Mrs. Claus. McGrath, wearing elf ears, chauffeured Mrs. Claus.

He was honored in September 2020 by the Center of Concern with one of its highest honors, named for the center’s founder, Dee Heinrich. It is presented annually to a longtime volunteer “who continues the pioneering spirit of outstanding leadership, teamwork, and vision” that Heinrich brought to the Center of Concern and the community.