Children can’t sit in Santa’s lap this year. But they can see him and talk to him and connect with him — 7 feet away inside a new Santa experience at Nebraska Furniture Mart, from the end of his sleigh at Galleria Dallas, on the opposite side of a three-sided […]

But they can see him and talk to him and connect with him — 7 feet away inside a new Santa experience at Nebraska Furniture Mart, from the end of his sleigh at Galleria Dallas, on the opposite side of a three-sided plexiglass box at Half Price Books and Rooster Hardware or in his study behind his desk and plexiglass at Watters Creek.

Parents worrying that they won’t get a Santa photo this year shouldn’t. The pandemic hasn’t stopped him. He’s even taking videoconference calls.

While Santa had to pivot, his helpers who are masters at design created ways to reimagine his annual visit during a pandemic. To help with social distancing, most Santa visits these days require a reservation.

At Nebraska Furniture Mart, Dallas visual designer Ignaz Gorischek created a holiday experience that allows for some intimacy with Santa, 7 feet apart in a series of small rooms behind life-size framed openings.

“It’s a wall of paintings in ornate frames that would be in a museum or a palace, and you become the painting,” said Gorischek, the former longtime visual store design director at Neiman Marcus who is remembered for the popular interactive holiday windows at the downtown store a few years ago.

“It’s still important for children to get to see Santa,” Gorischek said. There’s a choice of four backgrounds for the family photo gallery with Santa in the middle frame. It’s a free photo that’s immediately emailed or texted to the family. The wall of frames is big enough that it doesn’t need plexiglass separations, he said.

Sharon Andersen, CEO of Half Price Books and owner of Rooster Hardware, says she got her inspiration for how to present Santa this year from a holiday decoration.

“We decided we had to make him a box, like a music box” she’s had for years. Half Price Books has had the same Santa for 27 years, and the store didn’t want to give up the tradition.

Surprisingly, parents say the plexiglass experience isn’t as terrifying as sitting on Santa’s lap for the younger children, and the older ones are fine talking to Santa virtually from home.

That’s how NorthPark Center’s Santa is communicating with children this year. On his Facebook page, one mother said her children are older now and that in some ways, they thought the virtual visit was better than an in-person visit. “It felt very personalized and was so much more calm and special than at the mall,” she said.

“Last year, she was terrified of Santa,” Rucker said. “This year she felt safe because he was behind plexiglass. She’s been talking about him ever since.

“You expect to see kids bawling, but there was none of that,” Rucker said. At Rooster, parents take the photos with their own cameras. “I don’t know how [the store] can afford to have Santa. I always buy something when we go.”

Retailers and malls weren’t willing to give up on Santa this year. He’s good for business. 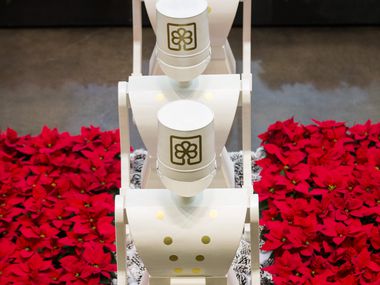 Planning for Santa in a normal year starts in February, said Stephany Ruiz, director of guest experiences at Trademark Property, which manages both Galleria Dallas and Watters Creek shopping center in Allen.

“This year, because of the coronavirus, we had to create two ideas, one for if it doesn’t end by the holidays and one if it does,” said Ruiz, who previously worked on Christmas experiences at The Grove shopping center in Los Angeles and for DreamWorks.

“We wanted to create a sense of normalcy for the little ones and not take all the magic out of Christmas,” she said.

To promote social distancing, Galleria Dallas is taking reservations for visits with Santa. So far, it has booked 1,000 reservations with more than 2,200 people.

There are microphones on the children’s side of the sleigh and speakers on Santa’s side “so no one has to shout,” Ruiz said. There were plenty of details to work out as they went along. To prevent glare in the photos, the plexiglass had to be tilted 15 degrees.

When it’s time to take the photo, children turn their back to Santa wearing Rudolph masks that they get as part of the reservation.

“Then in the picture, they look like they’re pulling the sleigh,” she said.

Where to see Santa

Nebraska Furniture Mart in The Colony has a new Santa Photo Experience near the Subway at the east entrance. Santa is there on Wednesdays from 5:30 to 7:30 p.m. and Saturday and Sunday from 11 a.m. to 2 p.m. and 3 to 6 p.m. Photos are free and emailed or texted.

The North Pole Express experience at Galleria Dallas runs through Dec. 24 and costs $35. It’s on the lower level near Sephora. The mall is offering in-person and virtual visits with Santa. Reservations can be made for slots from 10 a.m. to 8 p.m.

Watters Creek at Montgomery Farms in Allen has Santa available through Dec. 24. His Bavarian Village is next to Village Burger Bar. Book your reservation online. The cost is $20 and can be credited toward any photo purchases.

NorthPark Center’s Santa reservations are made online. Virtual visits will take place live from Nov. 27 to Dec. 23 by advance registration only. The cost starts at $24.95 per family, and all the money raised goes to Children’s Health in Dallas.

Santa visits are Sundays from 11 a.m. to 2 p.m. at Rooster Home & Hardware at 10233 E. Northwest Highway in Dallas. He will also be there at the same time on Christmas Eve. Bring your own cameras for these in-person visits.

The Santa at the Half Price Books flagship store at 5803 E. Northwest Highway in Dallas is there every Saturday through Dec. 19 from 1 to 4 p.m. The in-person visit is free. Bring your own camera.

Stonebriar Centre in Frisco offers photos with Santa on the lower level near Macy’s through Dec. 24. Make reservations online. Monday through Saturday from 11 a.m. to 7 p.m. and Sundays from noon to 6 p.m., plus Dec. 24 from 9 a.m. to 5 p.m.

Town East Mall in Mesquite is hosting Santa on the lower level near Dillard’s. Reservations are required. Monday through Saturday from 11 a.m. to 7 p.m. and Sunday from noon to 6 p.m. Dec. 24 from 9 a.m. to 5 p.m.

Shops at Willow Bend in Plano is also taking reservations to see Santa, who will be located near Macy’s. Photo packages start at $39.99. Monday through Saturday 11 a.m. to 8 p.m. and Sunday from 11 a.m. to 7 p.m., plus 9 a.m. to 5 p.m. on Christmas Eve. The contactless experience will be closed on Monday and Tuesday, Dec. 7 and 8.