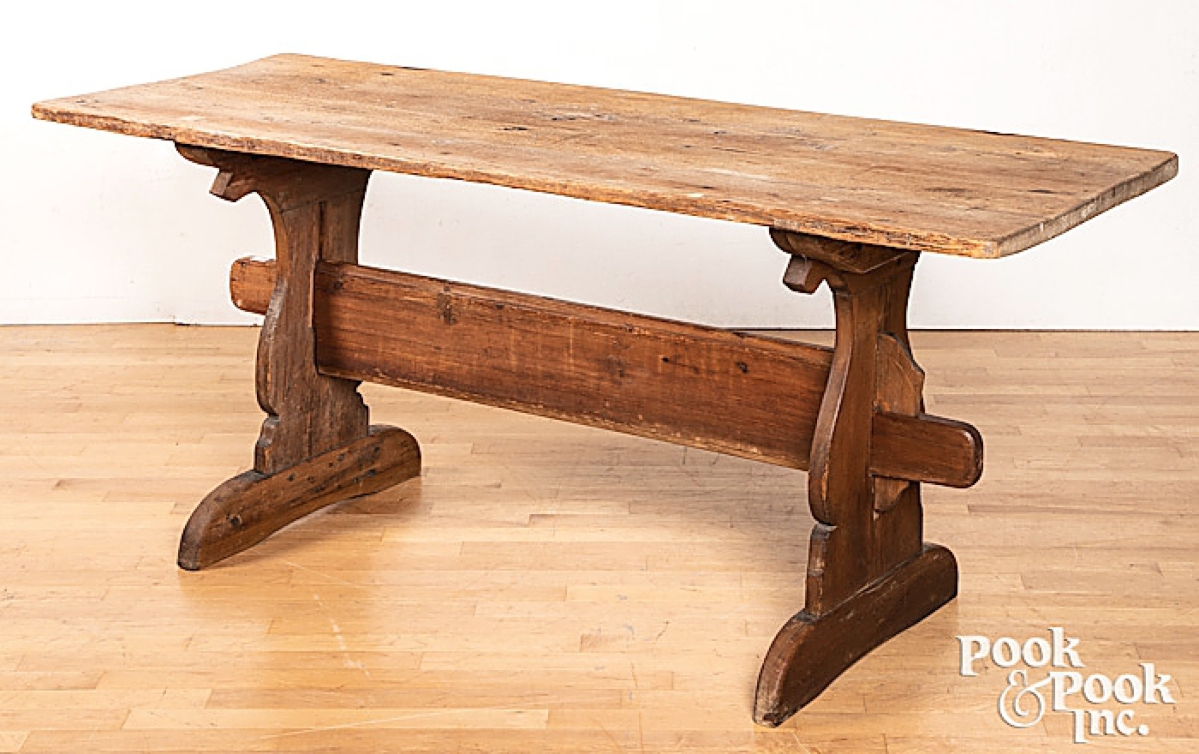 DOWNINGTOWN, PENN. – “I thought overall the Scandinavian market was strong all day,” Jamie Shearer at Pook & Pook told Antiques and The Arts Weekly after the August 19 sale of the collection of Barbara A. and Fred Johnson of Rockford, Ill. All lots in the 419-lot online-only sale sold for a total of just a few dollars short of $185,000. He noted the collection attracted attention from bidders around the world, as well as several new buyers to the company.

“In a very unpredictable market, Pook & Pook delivered strong results on some categories that as of recently have not garnered strong bidding. Marketing works! Also, the allure of a single owner collection seems to attract more bidding. With the buyer’s premium, the sale almost doubled the high estimate ($103,000). A phone call from the family shortly after the sale ended confirmed that indeed everyone was happy! They were ecstatic!”

Barbara and Fred Johnson parlayed an impassioned collecting hobby into an at-home business that transitioned into Barbara A. Johnson Antiques near the Clock Tower Inn and Shops in Rockford. Focusing on early American antiques, their interests gradually expanded to include the Scandinavian antiques that filled an American saltbox house the couple built in the early 1980s that was featured in several publications, including Mary Emmerling’s Collecting American Country, Country Sampler, Country Living and House Beautiful. 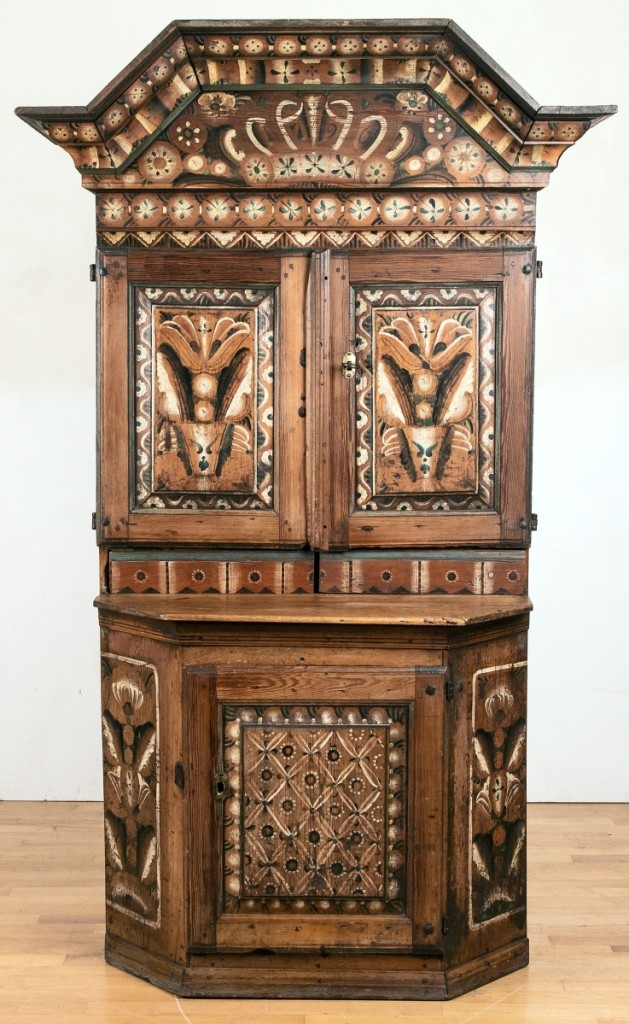 “That was a fairly cut-and-dry piece; it had the standard look for Scandinavian furniture,” Jamie Shearer said of the top lot in the sale, this painted pine cupboard that was dated 1796. A new client to Pook, a dealer of Scandinavian furniture and decorative arts in New England, took it to $3,717 ($500-$1,000).

Painted furniture and decorative smalls from Scandinavia dominated the collection and brought several new buyers to the firm, including a trade buyer from New England who specializes in that particular collecting category. Shearer said that buyer bought throughout the sale, including the top lot, a painted pine cupboard that was dated 1796, which brought $3,717. It had a stepped cornice and a trapezoidal-section lower cabinet that distinguished it from a similarly painted example of slightly later vintage; the same buyer snapped that up as well, for $2,016.

Much of the Scandinavian painted furniture had vibrant stylized floral decoration, which could be found on hanging wall cupboards, trunks, boxes and small implements. Topping these was a 25-inch-tall hanging cupboard with outstepped cornice that retained its original decoration that closed at $1,235; an iron-strapped dome-top immigrant’s trunk dated 1866 made $933; an 1840 mangle board with pinwheel decoration closed at $517, and a group of three painted scutching knives – used to process cotton, hemp or flax fibers for spinning – brought $466.

Painted furniture in solid colors was in plentiful supply. An unusual corner cupboard that looked like an open book from a distance retained its original red surface and potato-stamp decoration on the paneled cupboard door; it sold for $1,764. The robins-egg blue on the cabriole legs of a Nineteenth Century table was a near match with the blue frame of a Nineteenth Century armchair at $378.

Bringing the second highest price of the day was a Nineteenth Century pine trestle table that sold to a Pennsylvania dealer for $3,528. It led a group of American furniture that included a set of eight bowback Windsor chairs made in the Twentieth Century by David Smith of Morrow, Ohio. The set more than doubled its high estimate and sold to a Pennsylvania buyer, new to Pook, for $3,087. Activity and interest in a late Eighteenth Century Chippendale maple chest of drawers pushed it to $1,008 from an estimate of $400/700 and a painted turkey breast cupboard from the Eastern Shore is going to a Maryland buyer who paid $2,709.

The Johnsons’ daughter, Ginny Eames, recalled the last meal in her parent’s house when she, her sister and their husbands hosted the Pook & Pook team with a locally-sourced meal of Portillo’s hot dogs from Chicago and Culver’s cheese curds. The group gathered around a Nineteenth Century painted shoe foot bench table that brought $933.

More than 40 lots in the sale were made by members of the Schifferl family, most notably patriarch Lou, a Wisconsin artist and decoy carver who was born in 1931 and who passed his love of carving and making folk art to his daughter, Pam, and grandson, Brad. Two of Lou Schifferl’s carved and painted Canada geese were chased by bidders, with one flying to a New England collector for $3,465, which Shearer thought might be a record for one of his decoys. Shearer said the same buyer bought an additional three Schifferl carvings, including a hen on a nest, for $2,106.

The price of $3,465 paid by a New England collector for this carved and painted flying Canada goose decoy by Lou Schifferl (Wisconsin, b 1931) may be a record for a Schifferl decoy ($300/500).

The Johnsons’ collection included more than just Schifferl’s decoys. An oil on board farm landscape brought $756, while two painted cabinets by him made $731 and $554, respectively, with the higher selling one going to a buyer in Illinois. Brad Schifferl’s painted merganser decoy swam to $617, while several pieces by Pam Schifferl exceeded expectations. These were led by an oil on panel folk portrait of two children at $624, while three carved and painted Santa Claus figures was led by one pulling a sleigh for $403.

Decorative smalls took the form of household implements, led by a lot of three Nineteenth Century wrought-iron and wooden-handled food choppers cutting their way through the $160/220 estimate to finish at $2,835, a price paid by a new buyer from the Western United States. The heart decoration on two of the three was a particularly nice element and was found not only in a group of two Nineteenth Century food choppers ($1,386) but depicted numerous times in a tin heart-shaped cookie cutter ($1,084). Contributing to the appeal of a Nineteenth Century box iron was ornate scrollwork and it achieved $1,638, ten times its low estimate. Four pieces of antique copper food molds with wrought iron handles formed a lasting impression with bidders, who pushed the lot to finish at $1,575.

The Johnsons’ collection was not short on more conventional Americana offerings. A 2-gallon New York stoneware crock marked “Lyons” had a large cobalt flower decoration and rose to $1,008 from a new buyer. Bidders chased a copper full-bodied running horse weathervane, stamped “J. Harris & Son Boston,” which was caught by a trade buyer for $1,701; a 32-inch-tall copper rooster weathervane sold for $1,512. A 44½-inch-wide copper spread-wing eagle flew to $1,323, while a modern oil on velvet theorem of strawberries in a basket by David Ellinger (American, 1913-2003) realized $738, the same price achieved by a trade sign for W.C. Comfort.

The buyer’s premium is included in all prices quoted.