This winter, I’m traveling via my sweater collection. I buy few souvenirs when I travel. But there are some parts of the world that require me to leave ample room in my suitcase: good sweater places. I’m drawn to cold climates and northerly latitudes — and wherever harsh weather exists, […]

This winter, I’m traveling via my sweater collection.

I buy few souvenirs when I travel. But there are some parts of the world that require me to leave ample room in my suitcase: good sweater places. I’m drawn to cold climates and northerly latitudes — and wherever harsh weather exists, you’re likely to find tough wool sweaters knitted for the purpose of surviving it.

A good wool sweater can make a great, long-lasting souvenir. Those rooted in place channel the spirit of the cultures from which they come and are ambassadors for local craftsmanship and ingenuity. In tough, isolated destinations, techniques and designs are created and passed down through generations. Some sweaters become so tightly knitted to their place of origin that we know them simply by their place names: Fair Isle, Aran, Cowichan.

Although I’m grounded this winter, pulling on a sweater takes me to the place where I found, and fell for, it. There’s a sweater from a Lerwick, Scotland, wool broker where I went into a backroom to watch staff sort and grade piles of soft wool from Shetland sheep; a yoked cardigan bought upon arrival on the Faroe Islands and worn every day of my trip; a classic “Islender” crew neck I found in a little store in Norway at 70 degrees north. And, while the most severe weather I’ll endure this winter will probably involve outdoor dining, wearing my favorite pieces reminds me of the icy adventures they have kept me warm on, from the Arctic Ocean to the wintry streets of Moscow.

I will also be building up my winter wardrobe. While the pandemic has stopped me from revisiting my favorite places, it has created a new way to experience the joy of their sweaters. Some knitters have pivoted to selling products online — from strictly traditional designs to those with contemporary twists, but all deeply rooted in place. I might even pick up some needles and try making my own with one of the kits and patterns sold online by knitters from Ireland to Iceland — ideal for creating peaceful moments in a stressful time. Here are some of my favorite kinds of sweaters, and how you can experience them, too.

Six miles off Ireland’s west coast, the rugged Aran Islands are known for the cream-colored hard-wearing, heavy wool, cable-patterned style of knitwear named for them. Also known as an Irish fisherman’s sweater, the style developed from the British gansey (or Guernsey) sweaters worn by fishermen who arrived on the islands in the late 19th century, and it became widely appreciated when Ireland’s great literary revival of the early 20th century inspired many to visit Aran in search of folk traditions.

But when he founded the Inis Meáin Knitting Co. with his wife, Áine Ní Chonghaile, in 1976, Tarlach de Blácam opted not to include the word “Aran” in its name. Having seen how the Aran sweater was “copied so often around the world by cheap tourist shops,” the de Blácam and Chonghaile instead patented “Inis Meáin” — after the middle of the three islands where the company operates — to distinguish its products from mass-produced machine-made versions.

Inis Meáin Knitting Co. draws inspiration from the sweaters that island women have long knitted in their storm-lashed cottages, while reinterpreting traditional stitches; adding premium yarns such as cashmere and silk; and continually updating its collection with new styles. Its sophisticated garments are stocked in high-end stores worldwide. “We’ve attempted to show the world that there was a lot more to the Aran Islanders’ knitting repertoire than one highly decorated sweater,” wrote de Blácam in an email. The Aran sweater “was actually ‘Sunday best.'” He added: “It was never for everyday wear in the fields or out at sea.” The company’s changing collection includes pieces influenced by the “whole other range of Aran sweaters that were essentially workwear,” as well as their contemporary take on the most-immediately recognizable Aran. You can find the sweaters at inismeain.ie.

“It was the key economic activity for Coast Salish women in this particular area for 30 to 40 years,” Olsen said. “These were hard-working, creative, innovative women with initiative who fed their families.”

Since the mid-20th century, the Cowichan sweater’s popularity has spread beyond Canada. If you think you recognize it but didn’t know its name, that’s because knockoffs have appeared everywhere from Pendleton’s look-alike worn by the Dude in “The Big Lebowski” to the Hudson Bay Co.’s 2010 Vancouver Winter Olympics clothing. Authentic sweaters are made only from undyed wool by Coast Salish knitters, such as Dale Edwards, who learned to knit from his grandmother as a young child and today sells various garments through I-Hos Gallery, at ihosgallery.com. Contact him via Facebook and he’ll create whatever sweater design you want. You can also order directly from the Cowichan Tribes’ list of knitters found on cowichantribes.com.

Midway between the Orkney and Shetland islands, Britain’s most remote inhabited island is synonymous with the knitting technique to which it gave its name. Fair Isle is a distinctive form of stranded colorwork used to create rows of intricate patterns. It was developed by islanders who from at least the 18th century survived by trading woolen products with the crews on passing cargo, fishing and whaling ships. Word got out, and the sweaters became so renowned for their warmth and durability that they were worn by the 1904 Bruce expedition to Antarctica. Nowadays, while Fair Isle-inspired patterns show up everywhere, only a few knitters make the sweaters on the island. But you no longer have to make the long trip via nerve-shattering eight-seater plane or small boat to buy them.

In early 2020, Marie Bruhat was preparing to welcome the first guests to her Fair Isle Knitting Holidays, a weeklong residential experience for knitters of all experience levels. As travel ceased, she put the holidays on hold and pivoted to selling both off-the-peg and bespoke products online. She also now offers one-on-one online instruction; contact her at fairislewithmarie.com for details. Fellow islander Mati Ventrillon has run her online store, selling garments from three distinct collections, for five years. During coronavirus closures this year she launched her own book of designs, “Knitting From Fair Isle,” and “Mak-kist” (“make-box” in Shetlandic dialect) kits for sale for beginning knitters, which contain driftwood needles, traditional yarn scissors and Shetland wool in typical Fair Isle colors. Her website is mativentrillon.co.uk.

Many tourists who have visited Iceland have returned with a “lopapeysa,” (pronounced lo-pa-PAY-sa) a sweater made from unspun wool with a yoked design so distinctively Icelandic it has become almost a national symbol. They probably would have bought theirs in one of the Handknitting Association of Iceland’s two Reykjavík with sweater-buyers around the world.

In Reykjavík, locals have become more frequent visitors to the stores, shopping for wool to knit their own creations, said the association’s board president, Thuridur Einarsdottir. “We are staying home more and are told to use and buy Icelandic” products, she said.

The recent increased regard for the cozy and comforting sweater continues an interesting line in the history of lopapeysa: It seems to be particularly popular in times of upheaval. The sweater, whose yoke is believed to be inspired by the Swedish Bohus tradition and Greenlandic national costume, was developed in the early- to mid-20th century as people moved from rural farms to towns and villages, leaving women with less time to spin yarn. It first came into vogue during Iceland’s period of nation building following independence from Denmark in 1944. It resurged in popularity following the 2008 financial crisis, marking a return to tradition and heritage in an era of globalization

The tourism boom that followed the crash saw hugely increased sales of lopapeysa — this time due to the swelling tourist crowds — but also an increase in knockoff and foreign-made versions. Last year, to ensure authenticity, the lopapeysa received protected designation of origin status. Now for a sweater to be called an “Icelandic lopapeysa” it must be hand-knit in Iceland with wool from Icelandic sheep. To buy a sweater or wool, visit handknitted.is. For patterns and kits: 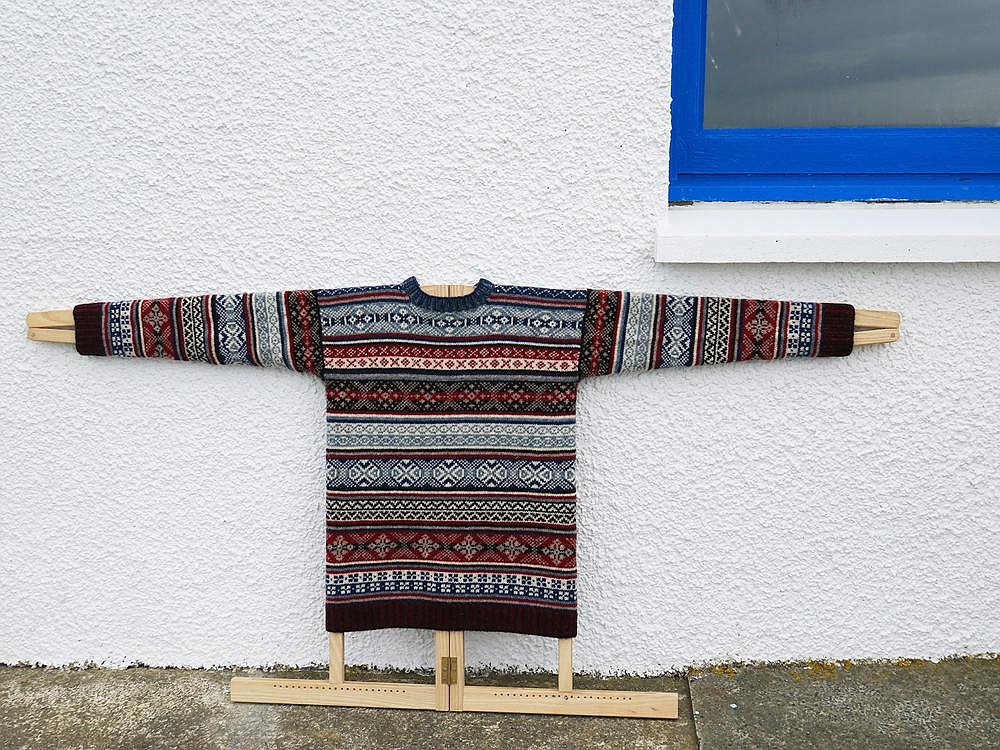