A sand bottle by Andrew Clemens would tie for top lot in the sale at $75,000. The bottle was titled “Silurian Sands/Mississippi River” and stood 9 inches high. It featured Clemens’ label to the bottom. Review and Onsite Photos by Rick Russack MARLBOROUGH, MASS. – In the distant past (like […]

A sand bottle by Andrew Clemens would tie for top lot in the sale at $75,000. The bottle was titled “Silurian Sands/Mississippi River” and stood 9 inches high. It featured Clemens’ label to the bottom.

MARLBOROUGH, MASS. – In the distant past (like 2019), Skinner’s August Americana sale would have been a live, two-day event. This year’s event, a hybrid sale, was divided into two parts. About 1,000 lots were sold in a timed, online sale ending the evening of August 18, the day before the live sale of another 166 lots. The format may have been different, but the quality of the merchandise was unchanged. It was high. There were several lots of early American furniture, American pewter, American silver, Shaker boxes ephemera and chairs, scrimshaw, folk paintings and weathervanes, along with dozens of lots of Chinese export porcelains, dozens of pieces of early stoneware and more than 50 lots of mocha, including the only known signed piece.

Expected to lead the sale were two sand bottles by Andrew Clemens of McGregor, Iowa, and one did, tying with a Chinese export porcelain tea bowl and saucer for the high price of the sale. The second Clemens sand bottle brought the second highest price of the sale. The auction, which grossed $2,012,000, utilized three online bidding platforms, was streamed live, with several telephone lines active throughout and there were numerous absentee bids. There were bidders in the salesroom, but not many. The days of a hundred or more people in the gallery are behind us, at least for now.

The collections of export porcelain, stoneware and mocha were assembled by sophisticated collectors who were willing to accept pieces with condition issues if the piece was a rarity or otherwise filled a hole in the collection. Much of the mocha was from the collection of Jonathan Rickard, who wrote the essential reference on the subject, Mocha and Related Dipped Wares, 1770-1939, and collected broadly for that reason. 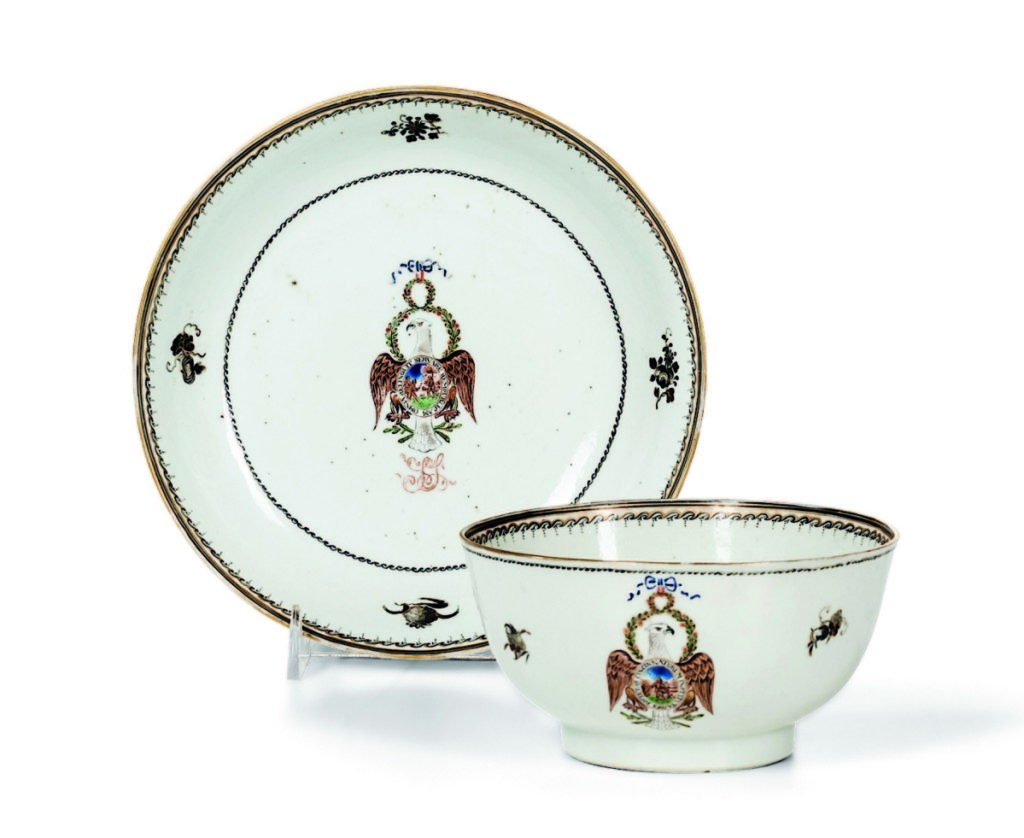 The sale had more than 100 lots of Chinese export porcelain. The rarest and most sought-after was this tea bowl and saucer bearing the arms of the Society of the Cincinnati. It sold for $75,000, tied for the top price of the sale.

Skinner holds the record for top dollar, $275,000, achieved by a sand bottle made by Clemens in the late Nineteenth Century. The most highly sought-after examples are those with the most detailed decoration and those that were made-to-order as presentation pieces or for special occasions. Strong interest in this artform is relatively recent. When the bottle mentioned above first appeared in an episode of the Antiques Roadshow in 2002, it was valued at between $4,000 and $6,000. There were two Clemens bottles in this sale, along with one made in the 1960s by another maker. Selling for $75,000 was an example just under 9 inches tall, titled “Silurian Sands/Mississippi River.” One side of the bottle depicted an eagle in flight and an American flag, the other side bore the inscription “Silurian Sands/Mississippi River” with a floral spray, a wavy line and geometric bands. A printed maker’s label affixed to the top was inscribed “Pictured Rock Sands Put up by A. Clemens, Deaf Mute, McGregor, Iowa.” The second Clemens bottle, which sold for $56,250, on one side depicted the date 1882, and on the other side showed an intricate bouquet of flowers. Clemens’ paper label was attached to the bottom. The more recent example by Harvey F. Haltmeyer, also from McGregor, Iowa, on one side depicted a Mississippi River steamer, a spread-winged eagle and shield, and was inscribed in sand “Made By/H.F. Haltmeyer/McGregor IA./1964.” It was 19½ inches tall and is believed to be his largest bottle. It sold for $3,750.

Tying the Clemens bottle, also selling for $75,000, was a Chinese export porcelain tea bowl and saucer bearing the arms of the Society of the Cincinnati, a spread-winged eagle. The organization, which still exists today, was formed in 1783 before the evacuation of the British army from New York. The membership comprised officers who had served at least three years in the Continental Army during the Revolutionary War. Its first president was George Washington. Membership in the society was hereditary, passing down from father to eldest son after the death of the original member. This tea bowl and saucer were part of a tea service for Captain Samuel Shaw of Massachusetts and had descended in his family. After the war, Shaw served as first consul to China, where he later ordered tea services for ten other members of the society, with each set comprising about 40 pieces. A piece from Shaw’s service is in The American Revolution Institute in Washington, DC.

The sale included more than 100 other lots of Chinese export porcelain in a wide range of colors and decorations. Some pieces were sold individually, while others were sold in lots with multiple pieces. Some pieces had been repaired or had condition issues. A lot of eight colorful plates, some with damage, brought $7,500 against an estimate of $600. A large lot with 51 teacups and saucers, with various black designs, some with damage, sold for $5,313. 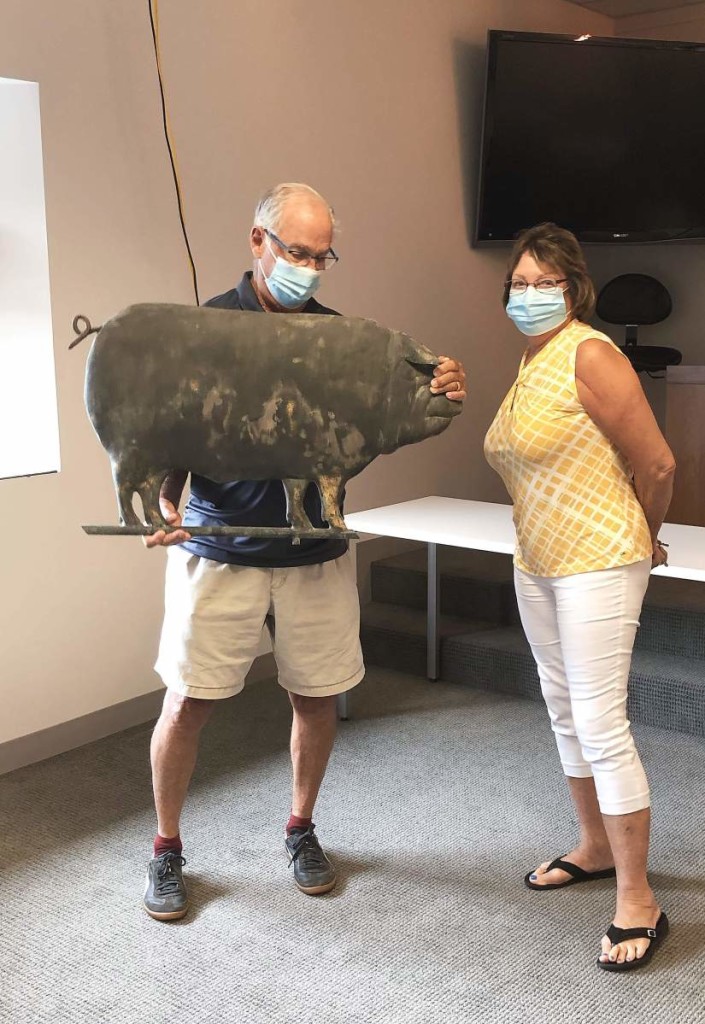 New Hampshire dealers George and Pat Spiecker examine one of the weathervanes in the sale.

When we talk about early furniture, of which there was a wide selection, it is of interest that a pair of Queen Anne cedar side chairs, made in Bermuda circa 1730-50, topped the selection, finishing at $20,000. The chairs had well-formed splats with vase and ring-turned stretchers. Another very similar pair earned $15,000, both pair exceeding estimates. American furniture with known or likely makers did well. At $17,500, a circa 1800 inlaid cherry serpentine four-drawer chest attributed to Nathan Lumbard, of Sturbridge or Sutton, Mass., drew a lot of interest. The provenance of this piece noted that it was reportedly owned by descendants of Alexander Hamilton. Also bringing $17,500 was a circa 1810 inlaid mahogany worktable, veneered with mahogany and bird’s-eye maple, attributed to Judkins and Senter, Portsmouth, N.H. A classical mahogany dressing table, owned by the wife of Commodore William Bainbridge, who commanded the USS Constitution during the War of 1812, sold for $8,125. It was cataloged as possibly having been made by Joseph Barry in Philadelphia, circa 1820. Probably from Wethersfield, Conn., a circa 1770-90 Queen Anne bonnet-top cherry high chest went out for $15,000.

Weathervanes did well, especially two Massasoit examples. One, a 30-inch vane depicting the chief with an arrow in one hand and a longbow in the other, sold for $43,750. The other, slightly larger, depicting a front-facing chief, from the John Gordon collection, earned $31,250. A 38-inch (with stand) Statue of Liberty vane, with worn verdigris and painted surfaces, brought $16,250. A 31-inch codfish with well-formed scales and attached copper fins brought $8,125. There were more.

There were more than 60 lots of stoneware, more than 40 lots of American pewter and numerous lots of mocha. A 3-gallon stoneware cobalt-decorated pitcher made by P. Herrmann, Baltimore, sold for $2,500. Much of the stoneware was sold in lots; four crocks and jugs, each decorated with cobalt birds, sold for $1,500. Sizes ranged to a 6-gallon crock, and makers included Ottman Brothers, F.T. Wright and Son and others. There were several early Boston and Charlestown jugs, some of which had condition issues. The large selection of American pewter included an engraved Eighteenth Century tankard by William Will of Philadelphia, which brought $16,250. It was engraved with the initials “GW” and bore the date 1783. Although the catalog did not say so, perhaps it had a George Washington connection. An early to mid-Eighteenth Century tankard by John Bassett sold for $15,000. Mocha, mostly from the Jonathan Rickard collection, included an outstanding dipped, fan slip-decorated pint creamware mug and cover with an applied strap handle, which realized $4,063. It’s illustrated in Rickard’s book on page 102. A rare early Nineteenth Century slip-decorated “harvest bottle” or “perry jug” with white slip snowflake and vine decoration and with dots on bands of rust and blue slip sold for $5,000. It had an applied strap handle, also with decoration, and “S+S” below the handle. (Perry is an alcoholic drink made from fermented pears.) Other rare forms and types of decoration were also offered.

A few days later, Skinner’s Steve Fletcher commented that the sale did well. “It was our first live Americana sale in more than a year and a half. We had a lot of good stuff for this sale, so we decided on this hybrid format. Internet bidding slows down a live sale so we kept that part shorter than we normally would have, putting more material into the timed, online sale. That worked. We’ve gone back to using LiveAuctioneers. We had a ten-day preview and there were always people here, so a lot of folks were able to check out the offerings. We’re experimenting with different ways of selling these days, hopefully satisfying both the consignors and the buyers.”

Prices given include the buyer’s premium as stated by the auction house. For information, www.skinnerinc.com or 508-970-3000.