Students in Turkey Are Standing Up for LGBT Rights 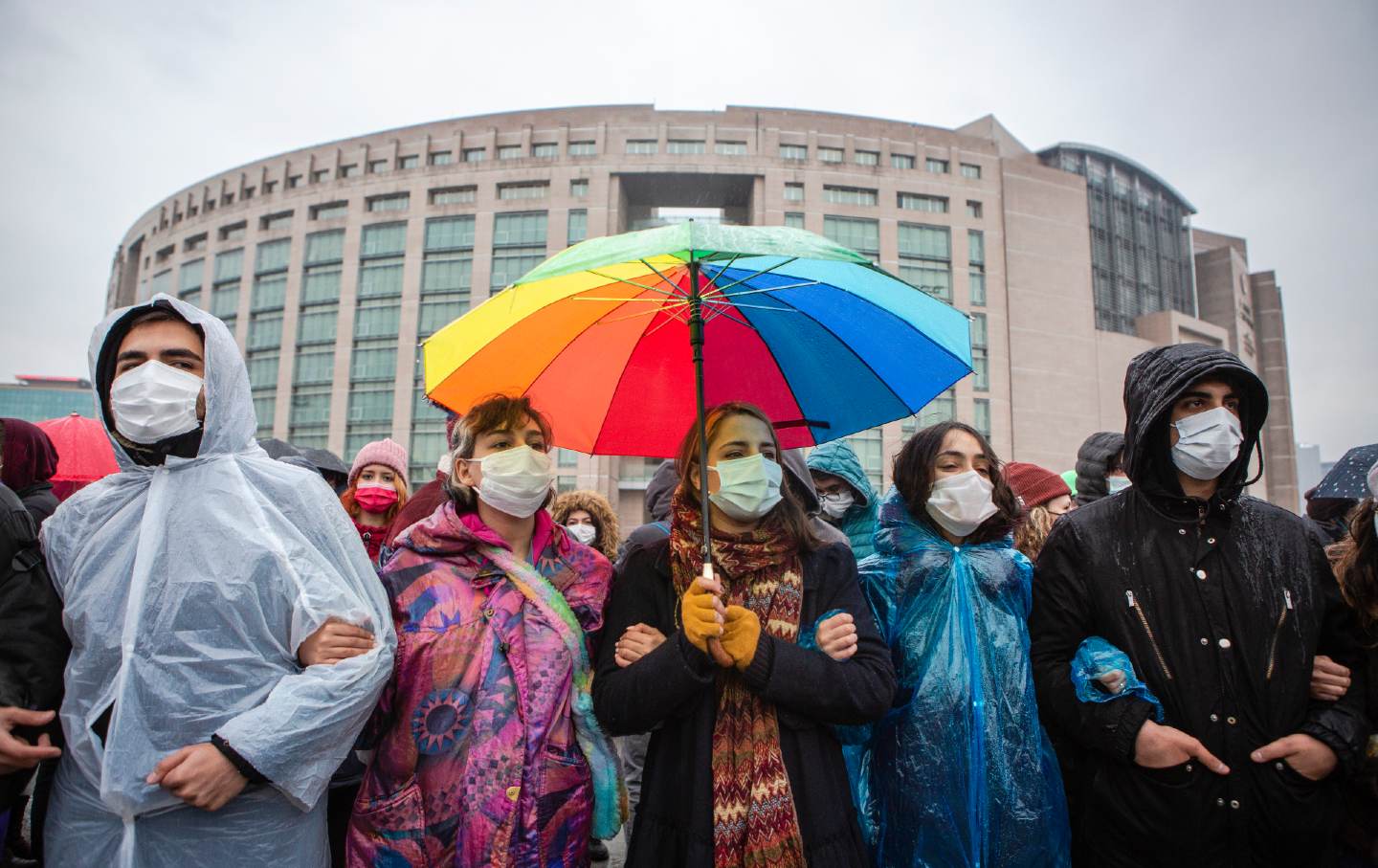 A group of protesters make a human chain as they wait outside the courthouse in Istanbul, Turkey. (Osman Sadi Temizel / Getty Images)

Thank you for signing up for The Nation’s weekly newsletter.

Thank you for signing up. For more from The Nation, check out our latest issue.

The Nation is reader supported: Chip in $10 or more to help us continue to write about the issues that matter.

Did you know you can support The Nation by drinking wine?

Tensions had been running high for weeks at Bogazici University, Turkey’s top-ranked institution of higher learning, but it was a student-organized art exhibit that brought about a police crackdown on the university’s campus.

The art exhibit, one of many events that students organized amid weeks of protests, included a poster of the Kaaba, the center of Islam’s most symbolic mosque in Mecca, Saudi Arabia, adorned with four different LGBTI pride flags in each corner.

The piece, which was anonymously submitted, quickly circulated online after the show opened on January 22. On January 29, Turkish authorities raided the campus and arrested the four student organizers of the exhibit. “4 LGBT perverts who committed the disrespect to the Kaaba-i Muazzama were detained at Boğaziçi University!” Turkey’s Minister of the Interior Suleyman Soylu tweeted after the students’ arrests.

This story was produced for Student Nation, a section devoted to highlighting campus activism and student movements from students in their own words. For more Student Nation, check out our archive. Are you a student with a campus activism story? Send questions and pitches to Samantha Schuyler at [email protected] The Student Nation program is made possible through generous funding from The Puffin Foundation.

Students say that the raid, dissolution of the club, and arrests of the student organizers were made possible by President Recep Tayyip Erdogan’s January 1 appointment of Bulu—ex-rector of two other universities and former candidate in local elections for the Erdogan-led Justice and Development party (AKP)—as the university’s new rector. In the past, Bogazici faculty members would review and vote on potential candidates for the position, which plays a role similar to a university president’s in the United States. But a decree issued by Erdogan in 2016 amid a two-year state of emergency granted him the power to name university rectors.

By January 4, thousands of students and faculty members were flooding the streets around the university to protest Bulu’s appointment. Now that he has dissolved the LGBTI+ club and allowed for the arrests of student organizers, the protests have only increased in size and scale.

The police crackdown on protesters has resulted in more than 600 arrests, many of them of students. As news of the protests spread around the world, other college students in Turkey and throughout Europe joined the movement. In a matter of weeks the university, a cornerstone of free speech in Turkish society, closed itself off; only students with university identification have been permitted on campus. Police have set up barricades around campus grounds, while armored vehicles patrol university property. “There were snipers positions around the buildings around the school—actual snipers,” Alaz Ada, a graduate student of linguistics based in Istanbul who attended the protests in solidarity, told The Nation. “They were there, aiming at students like a threat.”

For students at Bogazici, the art exhibit controversy was leveraged into an excuse for Bulu, in his first weeks as rector, to shutter the university’s LGBTI+ club. According to Ceren Solmaz, a foreign language education student at Bogazici University, the university’s LGBTI+ students were at the forefront of the initial January protests against Bulu’s appointment. The presence of these students, often accompanied by LGBTI+ pride flags, drew criticism from conservatives, but members of the LGBTI+ club weren’t the exhibit’s organizers. “From the first day, we were there chanting, ‘We don’t want a homophobic rector! We don’t want a transphobic rector! We don’t want a sexist rector!’” they said. “Then he decides to shut down the LGBTI+ club—which wasn’t even involved in the art exhibit.”

Bulu’s decision reflects a larger shift in Turkey’s society following Erdogan’s rise to power. The annual Istanbul Pride march was banned in 2015—at its height, it was the biggest gay pride march among Muslim-majority countries. Smaller-scale pride marches that have taken place since have been met with significant police brutality. “LGBT people being in public and celebrating ourselves is an inherently political thing in this country, especially where there’s a lot of public animosity towards us,” said Ada, who last attended the annual Pride march in 2019. “There were not only just policemen but civilians who came there that day, who were really aggressive.”

And most recently, on March 20, President Erdogan withdrew Turkey from the Istanbul Convention: an international treaty, signed in 2011, that seeks to combat gender-based violence and domestic abuse. Erdogan used rising femicide rates as an opportunity to attack Turkey’s LGBTI+ community. “The Istanbul Convention, originally intended to promote women’s rights, was hijacked by a group of people attempting to normalize homosexuality—which is incompatible with Turkey’s social and family values,” a statement released by Erdogan’s Directorate of Communications read. “Hence the decision to withdraw.”

Oner Ceylan, a translator and volunteer for Lambdaistanbul, an LGBTI+ community building organization in Istanbul, said he thinks that things worsened for Turkey’s LGBTI+ community after the 2015 general election that resulted in Erdogan’s political party, the AKP, regaining power. “Things became worse and worse and worse and more oppressive, putting a lot of pressure on anyone who had ideas who opposed or who questioned the power or the authority of the party in power,” he said. “I believe from 2015 on it went downwards in a really bad way, and it’s still that way.”

Mina Kocasoy, a philosophy student at Bogazici University, said the government’s response to the student-led protests and demands for LGBTI+ rights is another example of Turkey’s oppressive regime against the LGBTQ community. “I don’t think people care enough to even think about our existence, let alone, think about giving us rights, and there’s nothing that ever gets the conversation started,” she added. “This might be a catalyst for it, but I don’t see it happening for years.”

Turkey is a majority-Muslim country, and even though bigger cities like Istanbul and Ankara have vibrant LGBTI+ communities and embrace secular local governments, negative sentiment towards LGBTI+ individuals is rampant. According to a 2018 nationwide survey conducted by the Center for Turkish Studies at Kadir Has University, 53.8 percent of respondents stated that they did not want to be neighbors with a gay person—having a gay neighbor was the most undesirable of all of the choices on the survey, including a neighbor who is Christian, a refugee, a divorced woman, an unmarried couple living together, and a drunk person.

Ahmet Sunay, a political science student at Bogazici University, spent the weekend after Bulu’s appointment online, organizing with fellow students over Zoom. He and other student protesters relied on the university’s alumni association’s premium Zoom subscription to hold town halls on academic freedom, freedom of speech, and democracy, while organizing the protests. He said that though he’s grateful for being able to organize virtually, he has faced significant harassment on social media.

Recently, he filed a criminal complaint about a tweet from a state-sponsored “AK troll” who threatened to physically harass Bogazici’s LGBTI+ students who were protesting. According to Sunay, the prosecutor’s office did not pursue the case and claimed that the tweet was an expression of free speech. “If you are a queer person, and if you are trying to voice your opinion, no matter how mainstream or controversial that might be, you’re going to get awful comments about how your opinion shouldn’t matter,” Sunay said.

In-person, this kind of harassment continued. As word spread about the art exhibition and the closing of Bogazici’s LGBTI+ club, students organized more protests. But on February 2, two hours before some of the major protests were scheduled to begin, officials issued a Covid-related ban on protests. Despite this, students from across Istanbul came out to support Bogazici’s LGBTI+ students.

By the time Deniz Celik, a history student at Bogazici, arrived in the Kadikoy neighborhood, located in the Asian side of Istanbul, the protest had already started. She said that she saw groups of students marching while riot police tried to intimidate them. Within minutes, Celik’s friend was detained by the police. Celik said she didn’t know what prompted the police to target her friend, other than he “looks queer and like he’s from Bogazici,” which other students say was the basis of several other arrests that day. An hour later, Celik herself was arrested. “They jumped on me and they tackled me down, they kicked me a few times, and then they handcuffed me in the back,” she said. She spent two weeks under house arrest and is now on an indefinite probation, barred from leaving the province of Istanbul.

Though Bulu vows that he won’t resign, students and faculty members continue to organize and advocate for their academic freedoms and LGBTI+ rights. Protests and boycotts continue to take place; faculty members hold daily vigils in front of the rector’s office wearing their academic gowns; and online organizing efforts have broadened to include social media pages dedicated to sharing messages and video updates as the events unfold. Students have started to post updates in English in hopes of reaching a wider audience. “We demand the release of our friends,” the students wrote in one of their recent English-language tweets. “We want them back in their campuses where they belong, as soon as possible.”

As tensions continue to rise, amid an economic collapse and Erdogan’s continued efforts to exert his power, students remain hopeful. “Our demands are very clear,” Sunay, the political science student from Bogazici, said. “We want the rector out, the LGBTI+ club reopened, the two new departments that were established by presidential decree to be shut down, and we want our friends who have been detained, arrested, and placed on house arrest to be freed without hindrance.”

Several Bogazici students are already facing trial for the depiction of the Kaaba with the pride flags at the late January art exhibit. Most recently, another student was called to testify after being placed under a disciplinary investigation for draping a gay pride flag above the university gate during a protest. Students protested the investigation, leading to an additional two dozen students’ being detained on March 25.

For Ada, who said they lived for a period of time in France, the continued fight for LGBTI+ rights in Turkey is worth it. “If I stay here, I get to fight in a place where I feel like I belong, with people who are of my community,” they said. “I am more useful here than I can be somewhere else.”