Texas’ Botez sisters are at the forefront of an unlikely, and booming, partnership: Chess and esports

A chess match is often quiet. Whether played in an outdoor park or inside a stuffy room, the only racket during a professional match could be the sound of the clock or the occasional cough coming from the background audience.

But for Alexandra and Andrea Botez, chess has become colorful and loud. See, the Botez sisters play chess without a board in front of them. The two sit side-by-side in their Austin home, playing chess online.

The Botez sisters — both in the top 97.5 percentile on Chess.com — star in a growing chess industry and are turning to the wonders of the internet and streaming age to grow their sport in a previously unexpected manner, recently becoming the latest chess gurus to sign with an esports organization.

“I never expected to have a career in chess,” said Andrea, whose family and chess roots trace back to Romania. “It was always a side hobby that I was really passionate about.”

BotezLive reached 4,585 spectators in the first half hour of a recent Monday-afternoon stream. They spent some of that time getting situated, with Alexandra sitting directly in front of the microphone since Andrea’s voice carries more. The sisters reached nearly 10,000 concurrent viewers during the four-hour stream.

There were computers quite literally built to take down chess champions in the 1980s, but the Botez sisters use theirs to teach and entertain. Lengthy streams are common, as is frequent interaction with viewers and other content creators.

The stream was hardly an aberration, and that’s what made signing them so attractive to North Texas esports powerhouse Envy Gaming in December 2020.

Their signing, as well as the recent release of the wildly popular Netflix miniseries The Queen’s Gambit, has once again positioned chess to the forefront of mainstream entertainment.

“The growth of chess has been so healthy on Twitch, and it’s one of those games that is never going to die out,” Alexandra said. “Chess has really survived the age of time. So I think it’s gonna survive on Twitch as well.”

The Botez sisters didn’t need to travel the globe and win championships to earn money playing chess. Instead they pivoted to esports, joining Envy as the organization’s first official content creators.

Esports is still in its infancy but is already a billion-dollar global industry. Chess is a game over a thousand years old. Both benefited in online presence from the global pandemic. Now the two have combined to usher in one of the most popular, and accessible, stages of the game since Bobby Fischer was winning championships in the Cold War.

Twitch has become a dominant medium for entertainment in the past half decade. The platform started in 2011 and has developed into a service that makes watching other people play video games easy, but that’s not all the site is used for anymore.

Music, politics, gaming, sports, art and even just talking — there’s a streamer for everyone on Twitch.

It made sense for the Botez sisters to take chess online and make Twitch their platform. And Alexandra, a Woman FIDE Master, was certainly early to the game, along with Grandmaster and streamer Hikaru Nakamura. She would only hold a couple hundred viewers in her first year. As time passed, she grew her audience incrementally playing on Chess.com.

She and Andrea grew their channel by nearly 10 times what it was at the start of 2020.

“I mean, it’s really hard to explain how different it was before the explosion on Twitch,” said Alexandra, a Stanford graduate. “I mean, this was a life-changing year, if there’s been any.”

2020 wasn’t just massive for the Botez sisters. Chess also had a boon because of The Queen’s Gambit, based on the 1983 novel by Walter Tevis. The proof is in Chess.com’s own growth.

The website the Botez sisters and 51 million others use from the comfort of their own homes experienced a monumental jump in participants after the Netflix series brought more casual players to the scene.

In January that number was at 130,000 a day, Chess.com Vice President of Business Development Nick Barton said. Members of Chess.com knew the show was coming, but its impact was staggering.

It’s not just content creators who have noticed the bump in chess popularity. Julio Catalino Sadorra, the chess coach at the University of Texas at Dallas said his program — one of the top chess schools in the country — has seen its rise too.

His team had to pivot to online play using Lichess.org, a site similar to Chess.com in its purpose of organizing online competition.

When they streamed their annual Gligoric Transatlantic Cup in the fall — with the help of Grandmaster and analyst Robert Hess — the viewership was striking to the 34-year-old coach.

“It went from very few students watching in the venue to almost 9,000 views,” said Sadorra, himself a Grandmaster and UT-Dallas graduate. “Now we want to keep doing that to make our chess club more well-known.”

Chess and streaming just seem to mesh, he added. And he’s recognized its entry into esports as a positive sign.

For Envy, the partnership with the Botez sisters is a way to expand its brand. A championship-driven team like Envy, which won a Call of Duty League world title in 2020, gets to spread its horizons.

North Texas already had some notable personalities in the esports scene. The winningest Call of Duty player in the esports’ history, Ian “Crimsix” Porter, has 432,000 Twitch followers of his own. Dallas-native gaming streamer Preston “PrestonPlayz” Arsement has over 8.8 million YouTube Subscribers.

But chess? Only a handful of other chess streamers were signed with esports organizations before the Botez sisters.

“It’s really great to expand our brand to something like chess, something that is gaining traction and getting watched more and more in age-old competition,” Envy chief gaming officer Mike Rufail said. “We really just wanted to diversify the types of personalities we are supporting and the community we are supporting.”

Neither Alexandra nor Andrea are the best chess players in the world, though their ranks on Chess.com put them in elite company. But they can make their money with Twitch and YouTube subscriptions and donations, along with any future partnerships.

They are also continuing a tradition of chess helping their family survive and thrive.

Their grandmother taught their father, Andrei, how to play when the Botez family was still in Romania. Grandma had a family of seven living in a small, two-room apartment. They all shared a bathroom, and heat was a problem.

On the first floor of the apartment building was a much warmer room, but it was also home to the strongest chess club in the country at the time. To stay warm, they learned to play chess.

Andrei and his wife brought chess with them to the United States in 1994 when they fled Romania to seek political asylum.

Raising his daughters to eventually become chess stars wasn’t on his radar.

“I consider something like that to only happen once in a million years,” Andrei said. “If you look at the overall picture, the stars aligned.”

Andrei started teaching Alexandra, who was born in Dallas but grew up in Canada, when she was 6. It didn’t take long for her to win tournaments, as she was the Canadian National Girls Champion five times.

Andrea started at 7. She was coached by dad for a while too, and Andrei still coaches children today. It became a passion of his. Chess runs in the family like blood.

Skip forward to their young adult lives and now it’s Andrei watching BotezLive every day for his own amusement.

“It’s unbelievable for me,” Andrei said. “Even now, the fact that I can watch and listen to their stream, some of them are extremely funny. Sometimes I can’t stop laughing and that’s saying something that this entertainment is even for an old man.”

Where does chess go now?

Now that the Botez sisters have the backing of esports power Envy, they want to ensure their content is better than ever, Alexandra said. She was inspired by Envy’s success as a competitive esports organization, and that sparked her interest in matchmaking with the esports industry.

“Imagine what [Envy] can do now that they’re entering content, and this is why I have a ton of confidence in them,” Alexandra said. “I know they can execute. I know they’re professionals. I know they’re passionate. So their success in one area is certainly going to translate over.”

Andrea was ready to go to school, but she put herself on a one-year hiatus from higher education to pursue this project with her older sibling.

Finding new ways to entertain fresh faces that found an interest in chess is a priority, along with the laughs and concentrated videos that make their way to YouTube.

Alexandra and Andrea can also inspire more women looking at chess after The Queen’s Gambit made its rise.

Approximately 25% of new Chess.com members were women before the show, Barton said. Now that number has climbed to 33%.

Twenty million of the site’s 51 million total members joined in 2020, many of them young.

“It’s exposing new audiences to chess, especially my generation, which is all over social media and Tik Tok and Netflix, which is really the population that I think is most important [for growth],” Andrea said.

Both esports and chess have benefited in popularity during the worldwide pandemic, providing entertainment but also cutting costs. Live events are still missed by both, though, including at UTD

The UTD program, which has 17 appearances and four championships at the Final Four of collegiate chess (President’s Cup), would usually travel across the country and abroad to compete, Sadorra said.

When live chess returns, the industry will also return with the knowledge of the game’s entertainment value.

“Our expectation is that at some point, the popularity of chess will die down again, to some extent,” Barton said. “But that the baseline popularity for the game itself will be elevated from before COVID happened and before The Queen’s Gambit came out.”

In-person chess will return someday. But the future may be on the computer, and the Botez sisters can cash in on their early entry.

They will likely be live sometime in the next 24 hours, and they may still be growing.

Notable: Neither Botez sister planned on a career in chess, but Alexandra actually lived in China for a bit as an entrepreneur after graduating from Stanford. It was only after this plan fell through that she pursued a streaming career. She’s known on stream for accidentally giving up her queen, which her father calls a “Botez Gambit.”

Notable: Andrea was ready to study political science in college before the Twitch stream started to boom. She opted to take a gap year from starting school to keep the momentum going on the stream with Alexandra. On stream, she likes to come up with jokes to get under Alexandra’s skin. 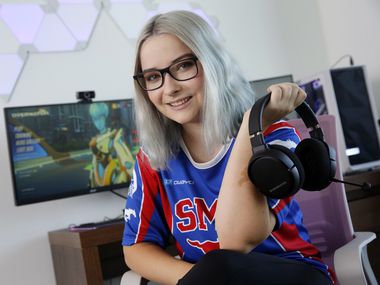