This is a story about the nadir, the end of days. Monday, March 24, 2008, marked five years to the month after the British army arrived in Iraq, preaching to the Americans their apparent expertise in counterinsurgency operations and understanding of the manifold ways of, in the historical British upper-class […]

This is a story about the nadir, the end of days. Monday, March 24, 2008, marked five years to the month after the British army arrived in Iraq, preaching to the Americans their apparent expertise in counterinsurgency operations and understanding of the manifold ways of, in the historical British upper-class vernacular, “the Arab.” This is the story of how that complacency—the claimed legacy of imperial policing and Belfast; of Greece-to-your-Rome and barely disguised Anglo-American contempt—became apparent.

The British army committed that bafflingly common 21st-century failing: It exuded superiority toward an exterior entity, then felt genuine surprise when that mean-spiritedness did not generate admiration and fellow feeling in return.

And as the British army in Basra, southern Iraq, experienced what some observers would later describe as the greatest British military disaster since Suez in 1956, or the fall of Singapore in 1942—though others dispute the drama of those comparisons—the institution itself would, on a wider level, start to engage in a wholesale (and needed) program of reform.

In 2008, for the British army, the paths of failure and improvement crossed.

This week in March was meant to be Brigadier Julian Free’s rest and recuperation slot, a mid-tour opportunity to go back to Europe for the 45-year-old commander of the British army’s 4th Mechanised Brigade. However, Major General Barney White-Spunner, in charge of the division and Free’s boss, asked to swap with him, and, well, White-Spunner outranked Free. So on March 24, with Iraqi Prime Minister Nuri al-Maliki inbound from Baghdad to Basra with half his government in tow, it was Free who stood waiting for him, while White-Spunner was in the Austrian ski resort of Zürs.

Maliki was no fan of the British army. He publicly blamed it for the baleful situation in southeast Iraq, and Basra in particular. But at that moment, he hoped to salvage a clearance operation in the city, impulsively launched to finally address the festering sore that Basra had become. The prime minister wished to get from the airport to Basra Palace, Saddam’s old edifice in the heart of the city, on the banks of the Shatt al Arab. But his operation was starting to career off the rails and mayhem in the city meant the only viable way was via helicopters from the British base at the airport.

Free met Maliki at the terminal building, and the prime minister shook his hand, apparently not having realized who the officer was. Free, however, clasped Maliki’s hand with both of his, in the Iraqi fashion—thereby providing better purchase because the prime minister could not pull away, allowing Free to get a message across to him. “We would do whatever was required to support the Iraqi forces entering Basra,” Free said he told him.

A day earlier, Iraqi troops began turning up in quantity at the huge British cantonment at Basra Airport. Overall, 28,000 Iraqi and American soldiers (all but some 700 of them Iraqi) would arrive within a week. Outside, the 14th Division of the Iraqi army—trained by the British—was deployed in Basra to quell the insurrection in the city, but one of the division’s three constituent brigades would simply dissolve, ceasing to exist as a military entity. In the first week of the operation, 50 dead and 650 more injured would pass through the British hospital at the airfield.

Inside the terminal, Lieutenant General Mohan al-Furayji, the head of the Basra Operations Command, an Iraqi headquarters that commanded all Iraqi security forces in Basra province, including army, police, and border forces, stood in a corner. Furayji was meant to be the man who would help bring Basra under control, but at that moment, he thought he was going to be sacked by Maliki, and pleaded with Free to intervene. Free did not get a chance to make a case for Furayji: Maliki, once he got his hand back, wanted no contact with the British leadership. His intention was merely to transfer his party onto helicopters to get to the palace.

This Iraqi operation was meant to take place months later and with careful preparation, but had at Maliki’s behest been rushed into immediate and chaotic action. The Americans decided that no matter how disorganized it was, Maliki’s political life was invested in it, and Maliki was their man. To maintain the trillion-dollar venture of the war in Iraq, the prime minister’s operation could not be allowed to fail. As a result, Lieutenant General Lloyd Austin—the commander of Multi-National Corps–Iraq, the organization responsible for command and control of coalition operations in the country, and second in seniority only to General David Petraeus—descended on Basra. Austin, now Joe Biden’s secretary of defense, was alien as a very concept in British military circles in 2008: a Black general.

Free traveled with Austin to the palace by helicopter. “Look, Julian, I don’t think you can come in,” Free recalled Austin saying when they arrived. Free said he understood; Maliki did not want to see any Brits. (Austin did not respond to a request to be interviewed for this book.)

The scene at the palace was chaotic, with local sheikhs coming in to see Maliki, and the full Iraqi government effectively in residence. Iraqi soldiers lounged around, but the site was also under periodic rocket attack. If one struck Austin, Free recalled thinking, just let me be next to him. The aftermath of such a situation would be unfaceable.

Maliki kept Austin waiting for hours, but they eventually held their meeting. Getting Austin back to the airfield proved difficult, though: American pilots had taken Austin and Free from the airfield, but a U.S. helicopter refused to land to collect them, citing the attacks, so Free summoned a British Merlin helicopter. Basra Palace is really a series of structures in a vast enclosed compound with an overall perimeter of 8 km and, amid some confusion, Austin, Free, and their entourage were taken to the wrong landing site, so the British helicopter initially took off without them. Free had to call the aircraft back, and Austin was bundled in.

The helicopter was also carrying Iraqi wounded back to the airfield, so Austin ended up holding an intravenous drip for the duration of the flight. In accordance with British practice to avoid anti-aircraft fire, the Merlin jinked all over the place, at one point going underneath a power line. After they landed at the airfield, Free said that Austin turned to a senior soldier accompanying him on the trip and asked him to rank the ride in terms of all-time life experiences, on a scale of one to 10.

The lighter interlude was brief. Back in Free’s office, the British officer said that Austin asked him how he was going to address the situation in the city. According to Free, he told Austin he would do what he had been forbidden to do so far: send British troops into town and partner with Iraqi units. Free said Austin asked him whether he had the authority to do so, and that he replied that though he did not, he would do so anyway.

By this stage in his tour, Free knew that for the Americans, “your word” and “telling the truth” were absolutely vital. In return, he listed his requirements, telling Austin he needed Blue Force Tracker, the American technology for monitoring the location of friendly units, as well as personal locator beacons, so that if forces operating with Iraqis were kidnapped, they could be traced.

Austin flew back to Baghdad, but he was not the only American to visit Basra. The United States needed to make this work, and suddenly, for the first time in this half-decade-long venture, Basra was the focus of events in Iraq: the “corps’ main effort.” 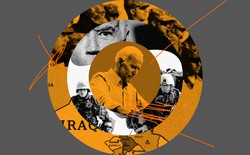 Flynn later attended a meeting of senior British and American commanders, sitting in the seat of White-Spunner, who was still on vacation. Free introduced him, then chaired the meeting. Exactly what Flynn said at this stage is disputed—Free’s and Flynn’s recollections differed—but he referred to Britain’s capacity for “overwatch,” where a military force is kept out of the combat area but can intervene in support of another if required.

“I have been sent here to ensure overwatch does not fail again,” is the version that Free remembered, and which later found its way into an official presentation on the event. “Overwatch is all about situational awareness, which you do not have.”

“It was,” Lieutenant Colonel Paul Harkness, a British officer who was present, recalled, “the moment of ultimate humiliation and embarrassment.”

Whatever Flynn precisely said, American graffiti penned onto the blue wall of a portable toilet that Eric Whyne, a U.S. Marine captain, saw around that time was less equivocal.

Q: How many Brits does it take to clear Basrah?

A: NONE. THEY COULDN’T HOLD IT SO THEY SENT THE MARINES.

This post was excerpted from Akam’s new book, Changing of the Guard: The British Army Since 9/11.

Simon Akam is a British journalist based in London. His writing has been published in The New York Times, The Guardian, The Economist, GQ, and Bloomberg Businessweek. He held a gap-year commission in the British army as a teenager.