The fight to save Tillie

The beloved icon sits in darkness, withering away inside a wooden shed just steps from the bustling beachfront. The paint on his hulking, concrete face is flaking. A chunk of his nose is ready to fall off. The years of salt and wind and neglect have exacted their toll, and […]

The beloved icon sits in darkness, withering away inside a wooden shed just steps from the bustling beachfront.

The paint on his hulking, concrete face is flaking. A chunk of his nose is ready to fall off. The years of salt and wind and neglect have exacted their toll, and spiderwebs hang from the steel frame keeping him intact.

For generations, Tillie — a caricature resembling George C. Tilyou, a 19th century showman and entrepreneur from Coney Island — watched over the Asbury Park boardwalk. He stood as a sentinel of summer with big blue eyes and a perpetual toothy grin, staring down from the lime-green walls of the long-since razed Palace Amusements building.

But Tillie has been banished behind a wastewater treatment plant for nearly two decades, hidden in a 20-foot tall wooden box. This is where the cherished landmark will spend his 65th birthday, decaying where the smell of sewage and salt air meet.

“At some point — and I think we’re getting near that — it’s not going to be salvageable,” explained Paul Himmelstein, a historical preservationist who inspected the mural in 2005, 2014 and 2016. “It’s not going to be the image people expect it to be anymore.”

Tillie has become a symbol of what Asbury Park once was — a storied summer playground on the Jersey Shore, rich with entertainment in the 1950s and 1960s and the place where Bruce Springsteen got his start, playing nightclubs such as the famed Stone Pony.

Tillie’s absence is also a reminder of what could be lost as the city enjoys a renaissance of high-end restaurants and million-dollar condos after decades of decline.

He stood watch over Asbury Park for decades. Leslie Worth Thomas painted him on the old Palace Amusements, an indoor arcade that sat at the corner of Cookman Avenue and Kingsley Street, before the summer tourism season of 1956.

The Palace Amusement building at the corner of Cookman Avenue and Kingsley Street.  Noah K. Murray | For NJ Advance

To baby boomers, Tillie is synonymous with childhood memories of the hallowed seaside resort. To a younger generation rediscovering Asbury Park as an artistic haven, he has become a rallying cry as developers build up the waterfront.

Kyle Sherman, an avid surfer who grew up in neighboring Ocean Township, feels so strongly about this, he had Tillie tattooed on his back with the phrase, “Defend The Shore,” inked underneath.

To the 36-year-old native, Tillie represents “the area I grew up in and love.”

“It’s the symbol of Asbury Park for people that grew up in the area before the resurgence of the town,” he said. “I got it when Asbury was still in its infancy of its rebirth. It was really a local surfing tattoo. There has always been a clash of locals and bennies.” 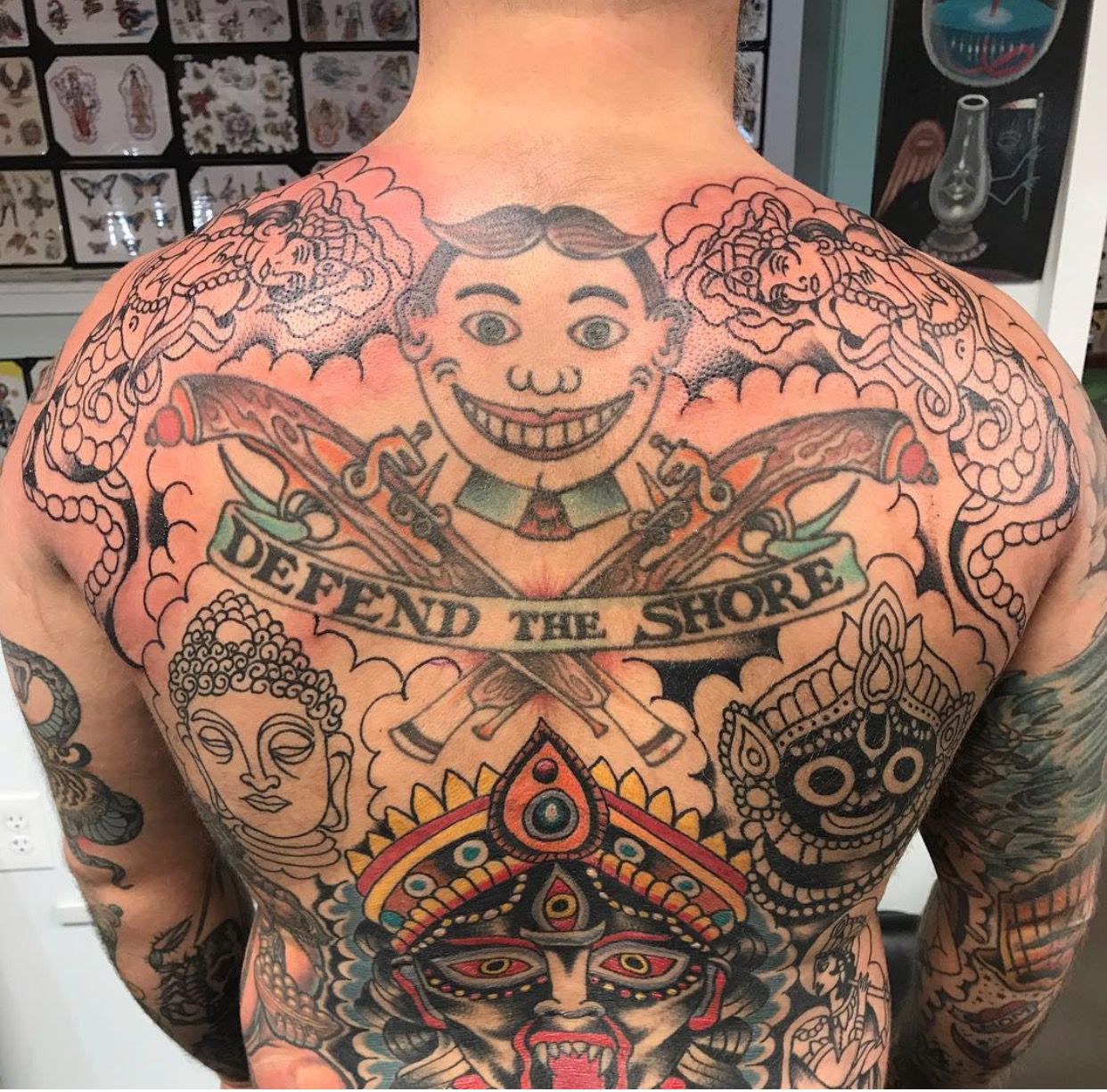 Kyle Sherman, 36, of Ocean Township, has Tillie tattooed on his back. Courtesy of Mike Schweigert of Electric Tattoo

Tillie once watched as young lovers galloped to the attractions such as the casino and the carousel house. He looked on as families basked in the sun by day and relished the glow of the city’s neon lights by night.

And then he witnessed Asbury Park’s deterioration as urban decay set in.

The roots of its decline began with the expansion of the Garden State Parkway in the late 1950s, which made more areas along the Shore accessible. The city also lost its allure as a major shopping destination with the rise of malls. Then came the unrest in 1970, which left some parts of the city badly damaged. Soon, Asbury Park was rife with crime and political corruption.

The City by the Sea became a shell of its former self, with shuttered businesses and abandoned buildings throughout.

“A lot of things happened simultaneously that led to Asbury Park’s dark days,” explained Eileen Chapman, a councilperson who moved to the city in 1974. “I remember coming here with my parents to go to the boardwalk, and the one thing I remember is the Tillie and the Ferris wheel coming through the roof of that (Palace Amusements) building. That’s my takeaway memory of visiting Asbury Park as a child.

“You can go to any other boardwalk, and you don’t leave with that same sense that you’ve just seen this iconic landmark,” she continued. 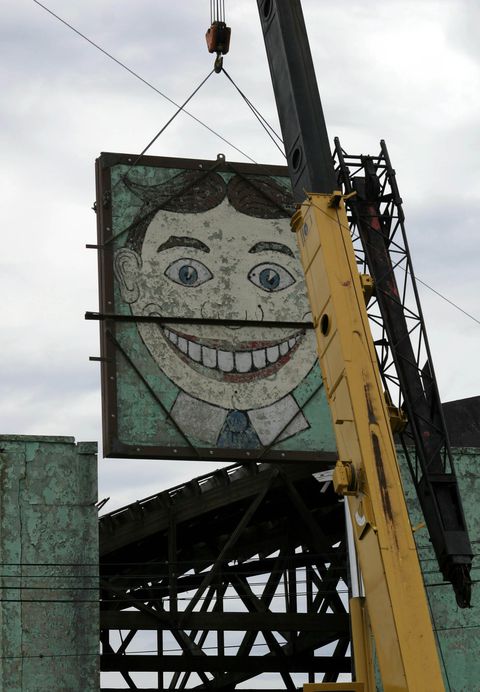 A crane operator lifts the Tillie mural from the Palace Amusement building on June 11, 2004.  Mike McLaughlin | For The Star-Ledger

The Palace closed in 1988. It sat vacant until June 11, 2004, when the building was razed to make room for new construction. The area is now occupied by a parking lot and a fitness studio.

Realizing Tillie’s historical importance, a group called Save Tillie pleaded to preserve him. The developers who took over the property agreed to keep a cutout of the concrete mural — along with dozens of other pieces — and promised a new home for Tillie.

“It was basically a compromise,” said Bob Crane, the president of Save Tillie.

While the original Tillie mural was swept away to its new storage unit behind the city’s wastewater treatment plant, a new Tillie quickly emerged atop the Wonder Bar on Ocean Avenue.

And the people of Asbury Park have automaker Chevrolet to thank.

In search of a location with a 1950s feel for a print advertisement celebrating the 50th anniversary of the Corvette, the car manufacturer scouted the Palace building. It then hired the rock group the Goo Goo Dolls as models. But by the time of the shoot in 2004, the iconic Jersey Shore location was a pile of rubble, and the team had to scramble for a new backdrop.

The location manager for the shoot knew Lance Larson, a well-known musician in Asbury Park who co-owned the Wonder Bar. Larson allowed the shoot to happen in front of his business and agreed to let the team paint the exterior to match the façade of the Palace building, said Debbie DeLisa, a former co-owner who now manages the bar.

With a paint crew working around the clock, the Wonder Bar was transformed in two days. Meanwhile, the team contracted local artist Leslie Steigelman to paint the new Tillie mural.

“People were clapping. They were walking by like, ‘Yes!’” Steigelman said. “They were so excited to see Tillie back up.”

But the original Tillie remains locked in a shed. 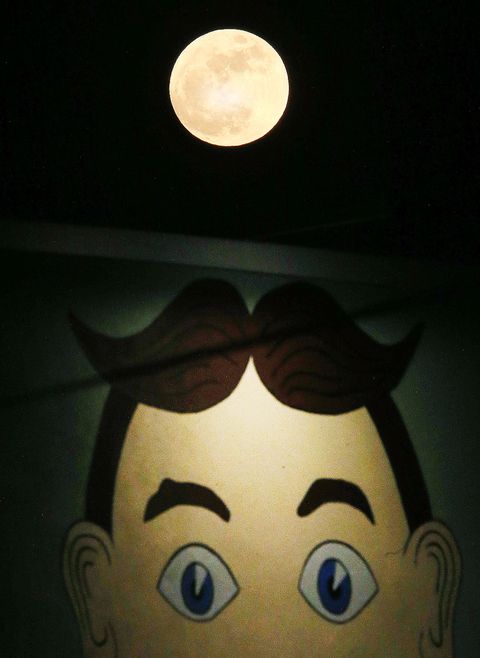 Tillie at The Wonder Bar under a supermoon in Asbury Park.  Ed Murray | NJ Advance Media

The fate of the old mural is complex and in the hands of developers.

Beachfront developer Madison Marquette maintains the mural in storage — and is responsible for relocating it, according to the state Department of Environmental Protection, which approved a master redevelopment plan of the Asbury Park beachfront in 2004.

The permit says the Tillie mural “will be incorporated into a new hotel development or retail development at this location as part of the lobby wall.”

That space, however, is now mainly a parking lot owned by a different developer, iStar — further complicating the matter.

The DEP said in a statement that the mural could be incorporated in different development projects if plans change.

Madison Marquette allowed NJ Advance Media to see the old Tillie mural, but did not comment on its future. A representative for iStar, Brian Cheripka, said Tillie’s fate is in the hands of Madison Marquette.

The Save Tillie group paid Himmelstein to do independent inspections — the first of which was funded by donations from a Springsteen benefit show. Himmelstein’s last inspection report in 2016 noted the mural had lost “significant” paint from its surface.

The question remains: Why has this revered artifact been sitting in storage for 17 years?

Chapman, the city council member, said it’s important to honor the original compromise to display Tillie in the city.

“There are some folks that are still waiting for that to happen,” she said. “It was a commitment. I think any commitment is important.” 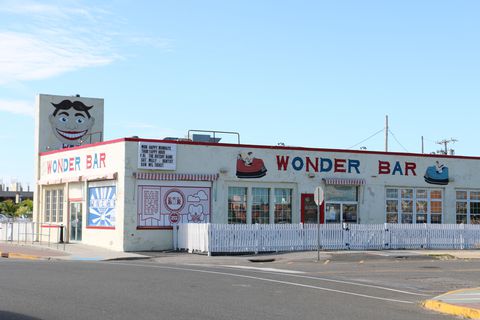 Our journalism needs your support. Please subscribe today to NJ.com.