The Ocotillo team has opened a new Mexican restaurant in Phoenix

CLOSE Chantico, a restaurant and bar inspired by the modern culinary scene of Mexico City, quietly opened its doors Monday afternoon. The Phoenix restaurant sits on the southwest corner of 11th Street and Camelback Road and features a menu showcasing the diversity of Mexican cuisine, from tuna ceviche to Sonoran […]

Chantico, a restaurant and bar inspired by the modern culinary scene of Mexico City, quietly opened its doors Monday afternoon.

The Phoenix restaurant sits on the southwest corner of 11th Street and Camelback Road and features a menu showcasing the diversity of Mexican cuisine, from tuna ceviche to Sonoran ribeye.

The restaurant is the latest concept from the team that has brought other stylish restaurants and bars to the Valley including Starlite BBQ in Scottsdale and Ocotillo and Sidecar Social Club in Phoenix.

“We have a lot of interesting things that encompass the whole style of Mexico,” Sterling said. “Not just Sonoran, but a Mexico City vibe where they have influences from all over, all the provinces melting together.”

Here’s what’s on the menu at Chantico

The restaurant is named after Chantico, Aztec goddess of the hearth. Sterling said his team takes seriously the process of making masa from corn, a vital crop to Mesoamerica. Chantico imports various kinds of heirloom corn from Mexico, soaks the kernels for 16 hours and then grounds the corn using basalt, a porous volcanic rock used by the Aztecs.

“It (basalt) aerates it and gives you a fluffier masa,” Sterling said. “If you want the best masa, you gotta have volcanic.”

Some of the dishes on the menu include: 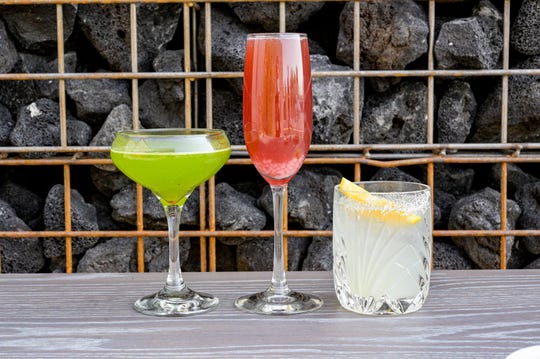 The happy hour menu, available from 2 p.m. to close, features drink specials plus a mix of items from the main menu and different items, such as a pork pastor chimichanga and torta ahogada dipped in a spicy tomato and arbol chile sauce.

Along with wine and beer, the drink menu offers a wide selection of whiskey, tequila and mezcal, including the award-winning Mezcal Carreño based in Arizona. Chantico also carries other agave liquors: sotol from Chihuahua, baconara from Sonora and raicilla from Jalisco.

A few of the cocktails guests can expect include:

What’s the vibe at Chantico?

The architecture at Chantico resembles the industrial style that can be found at Sterling’s other restaurants. Gabion walls caging basalt rocks adorn the exterior.

The restaurant features two full-service bars and three outdoor dining options: a patio facing 11th Street, a patio with a fireplace and a covered atrium that connects to the indoor dining room.

‘GENERATIONS AT A TABLE’: How community made Los Olivos restaurant a Scottsdale landmark

Sterling said Chantico will allow walk-ins but will start slowly for safety reasons during the coronavirus pandemic. The restaurant limits reservations to around 50 guests per day so his team can monitor any adjustments that need to be made, he said.

Reservations for Chantico can be made online.