CLOSE A “thin blue line” flag displayed in a window of Greece Odyssey Academy on Maiden Lane has sparked debate within Monroe County’s largest suburb. Last week, the school’s principal penned a letter to the school community, acknowledging that the flag, on display within a security office exterior window for several months, caused […]

Last week, the school’s principal penned a letter to the school community, acknowledging that the flag, on display within a security office exterior window for several months, caused some to feel uncomfortable.

“We understand that this situation caused harm and we are committed to doing the work to repair that harm,” Principal Jeff Henley wrote in the letter.

The flag under scrutiny is a black-and-white version of the American flag, with a blue stripe in its center. The flag is meant to symbolize police officers as the “thin blue line” between order and chaos.

Some people see the flag as a way to support police officers and law enforcement agencies. Others argue that the flag has become a racist symbol and represents white supremacy.

Steve Chatterton, a retired Greece police captain and the district’s security director, said that he understands that the flag has become polarizing, and said that the flag’s presence “wasn’t meant to make anyone feel uncomfortable.” 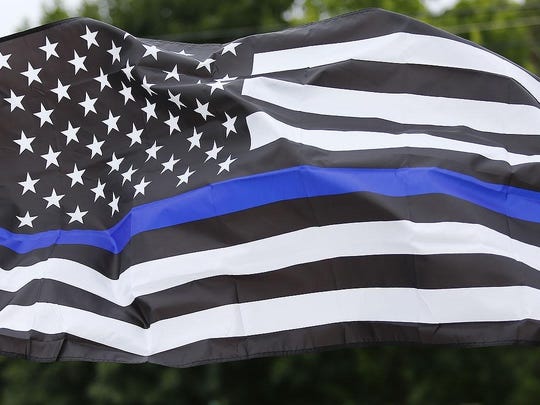 A paper version of the flag was displayed first on an interior door within the school by several security guards, including a Black employee, who all wanted to show their support for local police, Chatterton said. It was removed last year after students expressed concern. The guards then purchased a flag to display, with permission, within their office.

District spokeswoman Laurel Heiden said while the American and New York flags are the only flags displayed and seen from outside Greece school buildings, the thin blue line flag is not banned within the school district.

The flag, however, was removed from the window last month when social media posts questioned the flag’s presence, before the most recent weeklong school break.

“Last night’s meeting brought together community members with varying perspectives,” Heiden said. “Residents shared their personal experiences and listened to the experiences of their neighbors. As a district, we will continue to encourage that type of open and honest communication. It is the only way to truly learn and grow.”

Chatterton said he felt a good discussion took place at Tuesday’s meeting, and that board members made it clear that the district supports and needs school resource officers within Greece schools.

Currently, he said, two Greece police officers serve as school resource officers at Greece’s middle and high schools and a third officer, a DARE officer, leads programs and activities for elementary students. There are 35 security guards who work for the district, mostly in secondary schools.

“I’d never want to damage our relationship with the police department,” he said. “The reality is that bad things still happen in schools, school shootings still happen. We have to balance the line between kids’ safety and keeping them comfortable. I couldn’t do my job without the police.”

He also said that the intent of Henley’s letter wasn’t to condemn officers, but to address that the flag’s presence did not sit well with some students and their families.

‘School is not the place for politics’ 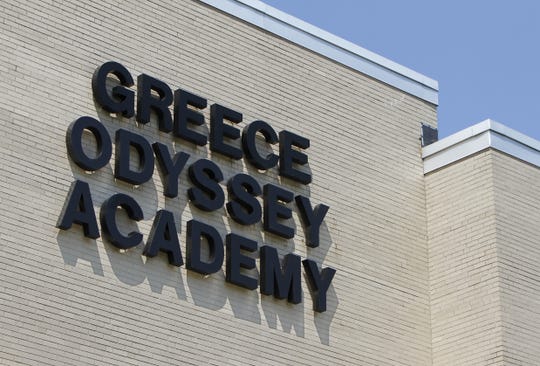 Jenna Curcio, a 2015 Odyssey Academy graduate who is also a candidate for Greece Town Board, at the meeting said that she was “incredibly upset and disappointed” to learn that the flag was on display at a Greece school.

Curcio said that students and parents previously complained to administrators about the flag’s display, and that school officials did not take their concerns seriously. At the meeting, she asked for the district’s faculty to be required to undergo anti-racist training and for the school curriculum to incorporate anti-racist education.

“Students are frustrated, tired and feel they aren’t being heard,” she said.

Corrinne Milne, a freshman at Greece Odyssey said she feels that the flag “is nothing but a symbol for racism, hate and a counter movement toward Black Lives Matter.”

As a Black student, she said she has experienced racism at school, but was disappointed in how the school handled the situation, and that the flag wasn’t removed sooner.

“After this, I do not feel supported nor protected by the staff and security at my school,” she said.

Faith Herd, a senior at Greece Odyssey Academy, said she was frustrated by the display of the flag within her school and felt as though security officers did not consider students’ concerns by hanging it on an exterior window.

“School is not the place for politics,” said Herd, who is Black. “We don’t all share the same political beliefs or opinions on what’s right and what’s wrong. But that doesn’t mean that school is the place for our staff to publicly display their political beliefs, especially when it makes students uncomfortable. Students’ opinions matter the most. Greece Central and Odyssey Academy needs to do more to make our Black and Brown students feel safe.”

Several people spoke at the board meeting in support of the flag’s removal, while others criticized the move.

“Since when did we start condemning the cops and police officers and turn them into villains?” asked Greece parent Ashley Bapst. “What kind of example is that setting for students who have family members in law enforcement?”

Bapst acknowledged that racism is a sensitive topic, one that she believes parents should address with their children, rather than the schools. “To suggest that any pro-police symbols or flags is a white supremacist intimidation tactic is absolute nonsense,” she said.

Board member Sherita Traywick said she respects both viewpoints and believes educators should teach students “that there’s two sides to every story.”

“I understand that people feel offended by the flag and its misuse and abuse by other groups,” she said. “I also understand those who stand in support of law enforcement.”

“You don’t have to walk away agreeing or loving the other side, but every side needs a voice,” Traywick said. “We need to create a space where each side is understood.”

About the controversial flag meant to support police officers 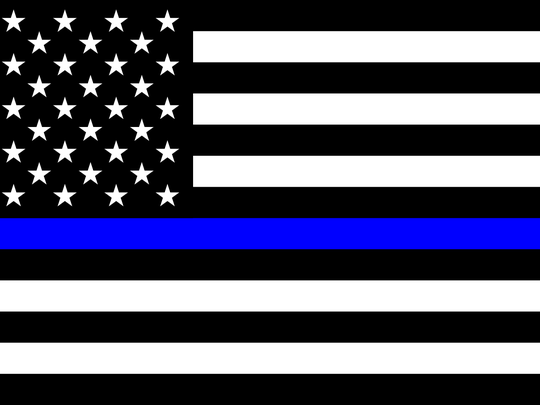 The flag has been popularized by the company “Thin Blue Line USA,” which also sells clothing emblazoned with the symbol. According to the company’s website, the flag is meant to be a sign for “promoting compassion and support for our nation’s police officers.”

The Black Lives Matter movement arose in 2013, after the acquittal of George Zimmerman, who killed teen Trayvon Martin in Florida, according to the movement’s website. Black Lives Matter has been invoked around the country this year during massive protests that were launched after the death of George Floyd at the hands of Minneapolis police officers.

In a June 8 article by the Marshall Project, “The Short, Fraught History of the ‘Thin Blue Line’ American Flag,” Andrew Jacob, president of Thin Blue Line USA said: “The flag has no association with racism, hatred, bigotry. It’s a flag to show support for law enforcement — no politics involved.”

According to the article:

“Jacob said the flag was not a direct reaction to the first Black Lives Matter protests — an idea suggested by a previous origin story in Harper’s — but he allows he may have first seen the thin blue line image after those protests spurred the circulation of pro-police imagery online. ‘That’s maybe why it came to my eyes,’ he said.”

Whatever the intended meaning of the flag, it has come to carry different connotations to different people.

At protests in Charlottesville in 2017, where white supremacist groups and supporters gathered to protest the removal of Confederate statues throughout the country, the blue-line flag was featured alongside Confederate flags, according to an Aug. 18, 2017, report from USA TODAY. (The company disavowed its use in Charlottesville.)

A July 31 NPR report highlighted a fight between a Massachusetts fire department flying the flags in honor of fallen police officers and community members who felt the flag was an overt display of racism.

A June 9 Politico report said even police officers have mixed reactions to the symbol, with some departments banning it outright, while others display it on government-owned vehicles.

The Politico report also noted that the flag is controversial because of its likeness to the American flag, and because of the U.S. Flag Code, which states: “The (American) flag should never have placed upon it, nor any part of it, nor attached to it any mark, insignia, letter, word, figure, design, picture or drawing of any nature.”