‘This is Donald Trump’s economy’

The ad comes a day after Trump visited Michigan, touting his belief that the nation’s economy will soon boom again, and 16 days before the Nov. 3 election. Both campaigns have recently concentrated more resources on Michigan, a state that Trump won by 10,704 votes in 2016, his smallest margin of victory nationally. 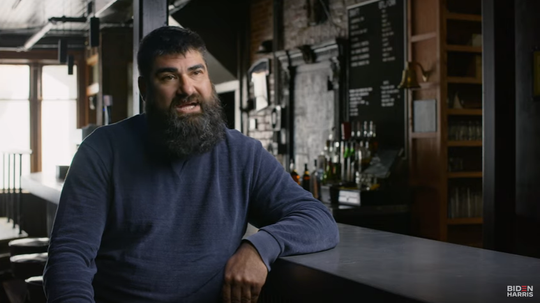 “This is the reality of Trump’s COVID response. We don’t know how much longer we can survive not having any revenue. A lot of restaurants and bars that have been mainstays for years will not make it through this. This is Donald Trump’s economy.”

Opened in the early 1970s, the the Blind Pig began as a blues club but later moved on to hosting artists from other genres. The college town venue has attracted some big names, including Nirvana, Pearl Jam and Soundgarden

“My only hope for my family and for this business and my community is that Joe Biden wins this election,” Malcoun says in the new ad.

The ad airs nationally on CBS during Sunday’s NFL game between the Pittsburgh Steelers and Cleveland Browns. It also features the music of The Beastie Boys, a hip-hop group that has never previously licensed its music for a political ad, according to the Biden campaign.

On Friday, Biden visited Detroit and Southfield. On Saturday, the incumbent president spoke at a rally in Muskegon that drew thousands of people. Trump has repeatedly called on governors to lift economic restrictions aimed at combating COVID-19 as the virus has continued to spread

He’s also touted the state of the nation’s economy before the pandemic hit and suggested the economy will make a comeback under his watch.

“You had the greatest economy you ever had,” Trump said on Saturday. “Don’t worry. You’re going to have that next year. Wait until you see the third quarter numbers.”

Michigan confirmed its first cases of COVID-19 on March 10. In the following weeks, Gov. Gretchen Whitmer instituted restrictions on businesses and public gatherings to try to limit the virus’ spread. As of Saturday, the state, which has reported jumps in new cases in the last weeks, had confirmed 144,897 cases of COVID-19 and 7,010 deaths linked to it.

Michigan’s unemployment rate was down to 3.6% in February 2020 before the pandemic hit, according to the Bureau of Labor Statistics. The jobless rate surged to 24% in April at the height of the pandemic. In July, it was 8.7%.