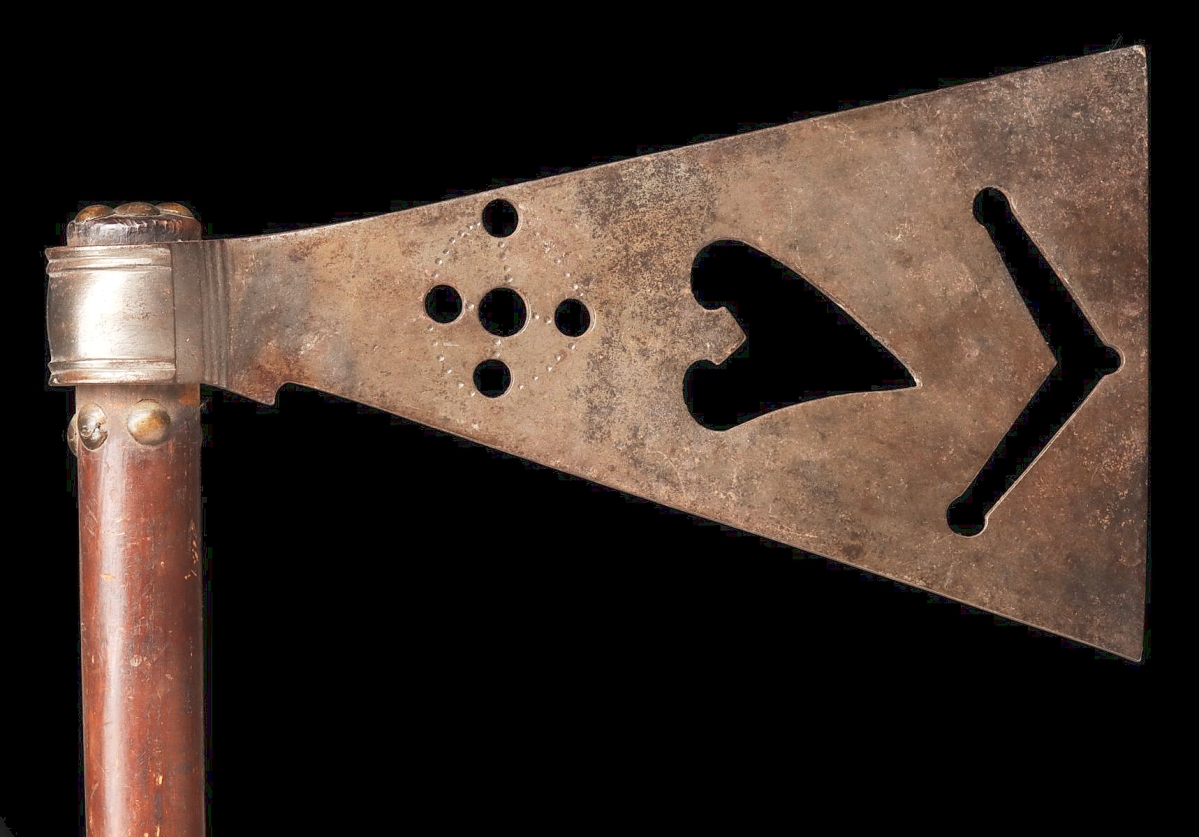 A telephone bidder evinced belief for this Nineteenth Century Missouri war axe and took it to $32,200, second highest price in the sale.

LONE JACK, MO. – Bidders battled over a restored 1935 Chrysler and a Nineteenth Century Missouri war axe at Soulis Auctions’ August 21 sale. Those were the two top lots in the 500-lot gallery auction hosted by Dirk Soulis, owner and principal auctioneer of the firm who has been involved in the auction business since 1985. The sale totaled $448,427 with a 92 percent sell-through. A total of 1,700 registered bidders vied for items on four online platforms, plus phone and absentee bids. Originally, Soulis had planned on including in-person bidding, but the summer surge in coronavirus infections put the kibosh to that, and an alternate plan to conduct the event outside under a tent also proved untenable due to the torrid summer weather. Potential bidders for the four vintage cars that were up for offer, however, were able to examine them up close and take a spin around the lot.

The beautifully restored 1935 Chrysler Airflow Imperial tooled to a $35,200 final price. The Series C-2 car came from the Joseph family of Belleville, Ill., owners of the world’s oldest Chrysler-Dodge-Jeep agency until August 1, 2006. The buyer was an internet bidder from St Louis, Mo., who advanced the car’s $15/20,000 estimate. 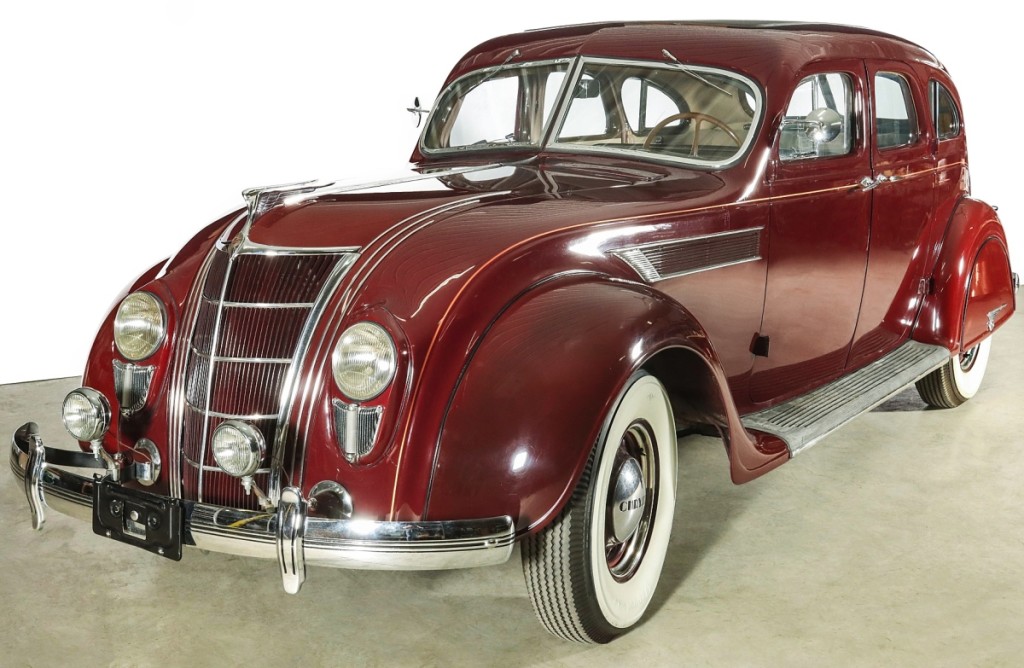 Top lot in the sale was a beautifully restored 1935 Chrysler Airflow Imperial, which motored to a $35,200 final price. The Series C-2 car came from the Joseph family of Belleville, Ill., owners of the world’s oldest Chrysler-Dodge-Jeep agency until August 1, 2006. The buyer was an internet bidder who advanced the car’s $15/20,000 estimate.

Next highest lot in the auction was $32,200 from a telephone bidder for a Nineteenth Century Missouri war axe. “This area of collecting saw some high-quality reproductions approximately 20 years ago that shook the confidence of the market,” said Dirk Soulis. “I’ve been trying for eight months to purchase expert opinion from someone that the market at large would have confidence in, since my opinion of the piece as a generalist auctioneer would carry no weight. Except for two well-wishers and a helpful respondent who told me to just get on with it and it would take care of itself, I couldn’t find anyone among the several contacts I made who would help. They all said the situation was too fraught. What I did inadvertently gain from this was a group of potential bidders who called from time to time to ask when the axe would finally be posted for bidding. After three weeks of no action online at the opening bid of $5,000, that amount was finally offered from the internet a bit after I opened the lot. From there, the action came from five telephone bidders.” The estimate on the war axe was $10/30,000.

Also from the Nineteenth Century was an iron pipe tomahawk with wire inlay. Its period wood handle was broken in two near the upper end and it was decorated with punch decoration overall and inlaid with pewter, with some unidentified metal bands held by tacks and inlaid brass. Fitted into the wooden shaft was a forged iron tomahawk pipe head measuring 6-15/16 inches long with a flared blade 2-3/8 inches wide on the end of which both sides were embellished with curvilinear designs traced in tiny dots of inlay. Bidding was not so fervent on this lot and it finished at $4,520, a bit below its low estimate. Soulis speculated that doubt about whether the handle was original may have held back the price. 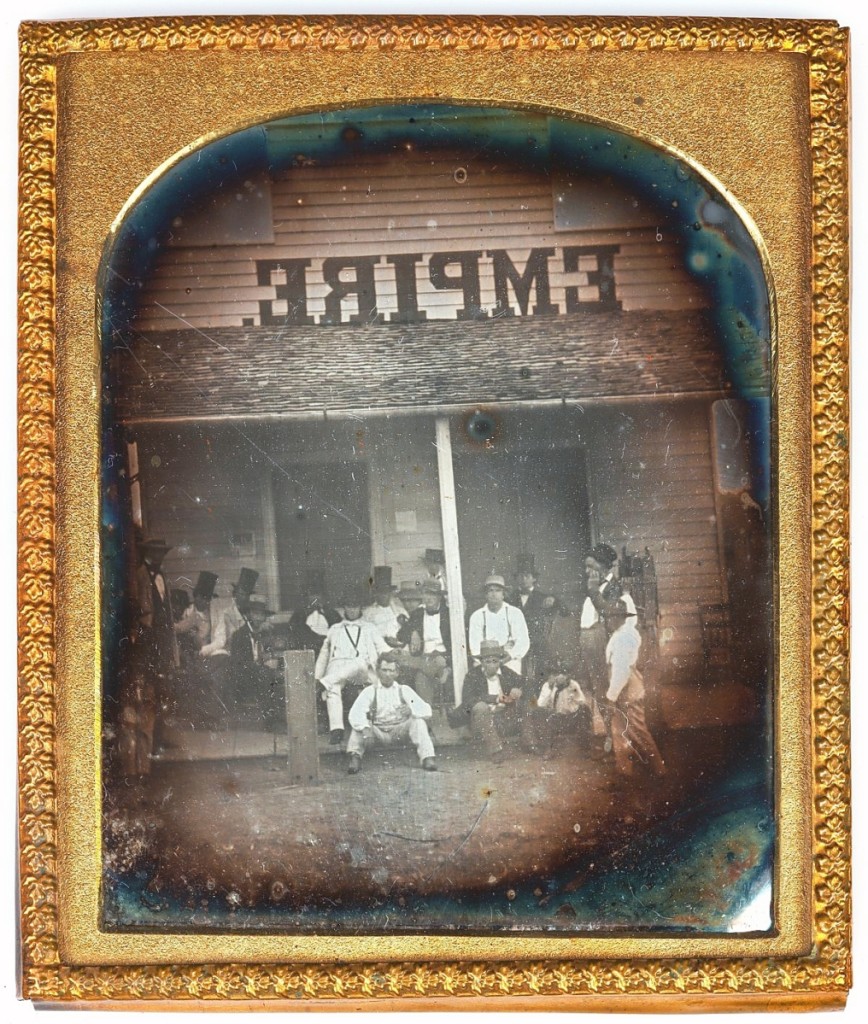 A sixth-plate daguerreotype documenting a group of men gathered outside the storefront of the Empire was taken by bidders to a final price of $5,664 against a $500-$1,500 estimate.

A one-owner 1969 Volkswagen Karmann Ghia convertible tipped to $19,232. The estate vehicle came straight from years of storage and was offered without reserve. In running condition, the car’s odometer showed 73,000 miles, and it also came with a good amount of storage dust from the home where its bachelor owner lived for nearly 70 years. The Karmann Ghia was last produced in 1974 to make way for the new VW Scirocco. Only 365,912 coupes and 79,326 convertibles were produced, which make the Karmann Ghia a fairly rare car considering it was produced for nearly 20 years.

Right behind it was a 1980 MG convertible Model B with rare supercharger, also offered with no reserve and selling for $8,531. According to the British Motor Industry Heritage Trust, an archive that holds the original factory records created by many of the leading British motor manufacturers, this particular MGB Roadster was made for export January 9-10, 1980. With 60,000 miles on its odometer, its color was listed as “carmine” with a beige interior and tonneau cover. The previous owner made numerous upgrades to the roadster, one of them an addition of a supercharger, thought to be the only such upgrade to an MGB in North America. A show placard found in the auto stated that it is in “original cosmetic condition,” noting the installation of a “partial leather interior.”

A scarce Gilbert No. 16 floor-standing regulator clock was bid to $6,050. Measuring 102 by 33 by 13 inches, the clock’s solid cherry case carried a pediment-form crown fronted by an Egyptian revival mask on tablet over a dentilated frieze above the front door, which was flanked by side carvings and set with darker spandrels. The clock’s porcelain enamel dial had a hand painted Roman numeral chapter ring enclosed by a nickeled bezel and fronting an eight-day dead beat movement. This was powered by a single nickel wrapped weight and compensating pendulum with three cut glass jars of mercury.

Back in the Nineteenth Century, a vernacular photographer captured a storefront scene for a sixth-plate daguerreotype. In the image, a group of men are gathered outside a clapboard structure with shake shingle overhang and painted letters “Empire” (backwards in the dag) on the structure. There was a hallmark for A. Gaudin Brevete on the upper right, and the mismatched leatherette covered wood case with split spine measured 4 by 3¼ inches. Marc Antoine Gaudin (1804-1880) was a French chemist who was a pioneer in photography. Bidders liked the subject, which although not identified as to location, may have been in New York, the Empire State. A Scarsdale, N.Y., private collector took the final price to $5,664 against a $500-$1,500 estimate. 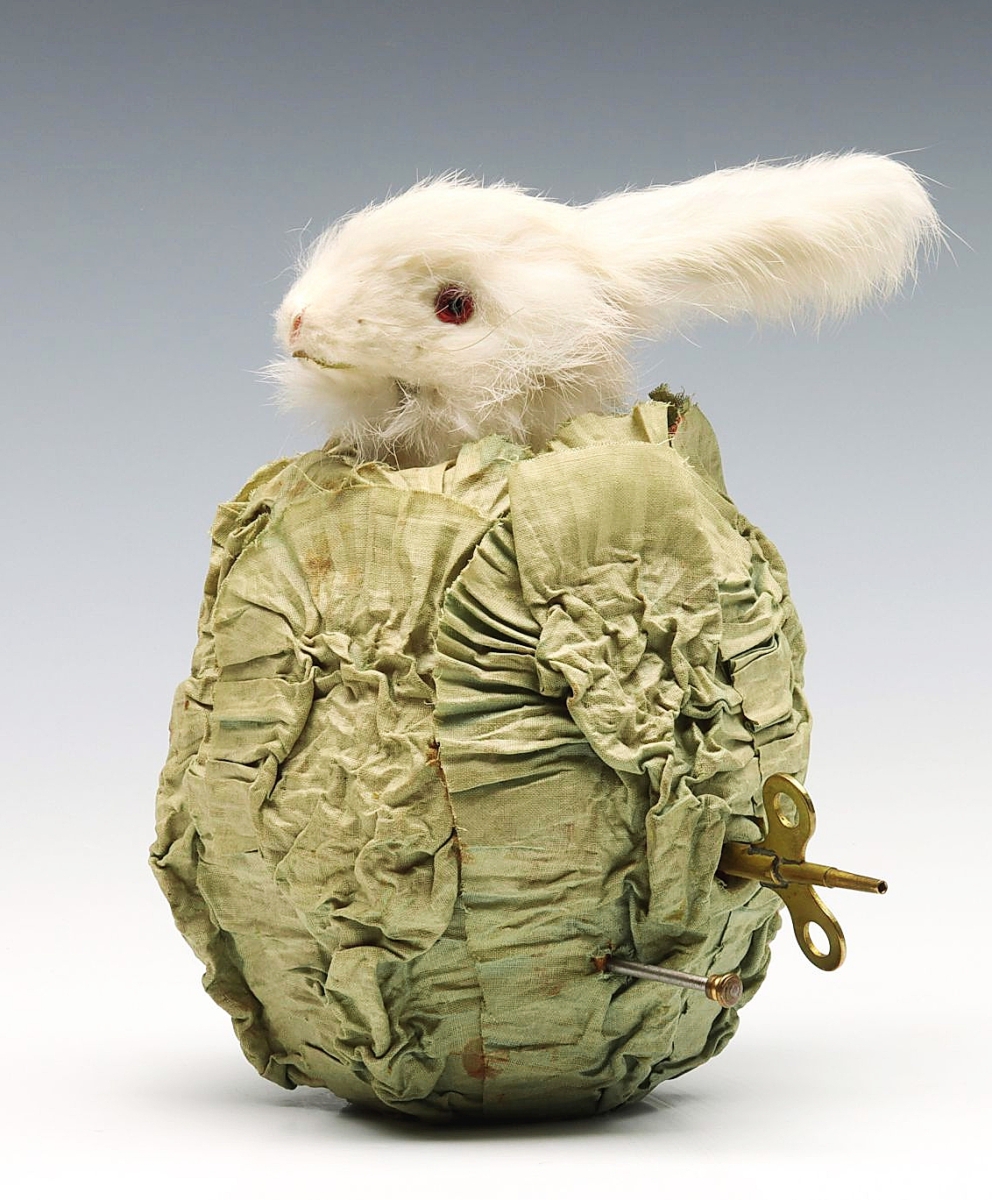 Charming bidders to the tune of $4,720 was this musical clockwork Rabbit in Cabbage automaton, circa 1930.

There were several decorative arts highlights in the sale. Foremost among them was a late Twentieth Century reproduction floor lamp after Tiffany that outshone its $800-$1,200 estimate by finishing at $5,428. The lamp featured a large domical rose pattern leaded glass shade on a bronze lotus pattern base and stood 78 inches high. A Vienna-style 26-inch KPM floor vase signed H. Weigel took $4,484, while a musical clockwork Rabbit in Cabbage automaton, circa 1930, charmed bidders to the tune of $4,720.

Collectors of angling gear trolled for a rare B.F. Meek & Sons no. 44 fly fishing reel. The silver reel with ivorine handle marked B.F. Meek and Sons was sold to Horton Mfg in 1916. With the serial number 3733 on the reel foot, the lot was landed for $3,776.

Clawing its way to the same price was a Buckley Mfg Art Deco coin-operated arcade digger. Its tower-form case with great design was topped by a stepped iron cap with nickel plating over the glass case and digger apparatus. A half-round nickeled glass frame was accented by applied decoration of Art Deco sunrays, and its nickel-plated iron front featured modernistic designs and a hinged door.

Standing tall among the bronze sculptures offered was one depicting Napoleon atop a horse. Created by Angiolo Vannetti (Italian, 1881-1962), the early Twentieth Century piece showed a dispirited Napoleon Bonaparte astride a spirited stallion in rich brown patina. With cast signature of Angiolo Vannetti Firenze at the right top corner of the rectangular base, the 28-by-27-by-9-inch sculpture realized $3,540. The same price was achieved for a set of Four Arthur Court cast aluminum faux antler chairs. Arthur Court (1928-2015) of San Francisco created and marketed a full line of antler furniture and accessories beginning in the mid-1970s.

Prices given include the buyer’s premium as stated by the auction house.

The firm’s next auction is October 22-23, a two-day affair with fine art and photography on the first day and Americana on the second. For information, 816-697-3830 or www.dirksoulisauctions.com.