The Dorothy Turkel house, one of Detroit’s most unique homes and the only one in the city’s limits designed by famed architect Frank Lloyd Wright, has opened its doors for a rare peek inside as part of a virtual art exhibit, but you’d better move fast before it closes Saturday. SITE: […]

The Dorothy Turkel house, one of Detroit’s most unique homes and the only one in the city’s limits designed by famed architect Frank Lloyd Wright, has opened its doors for a rare peek inside as part of a virtual art exhibit, but you’d better move fast before it closes Saturday.

SITE: Art and Architecture in the Digital Space by Detroit’s Library Street Collective was launched virtually to showcase contemporary art in some of Detroit’s most significant architectural buildings. The exhibit, the first iteration of which was in Detroit’s historic State Savings Bank, aims to create a digital connection between the visual arts and the built environment.

“We wanted the second iteration (of SITE) to be in the Dorothy G. Turkel House as it’s the only example of Frank Lloyd Wright’s architecture in the city of Detroit, and people outside of the city may not be aware of this,” said Anthony Curis, co-founder of the Library Street Collective. “It’s also privately owned, so it’s exciting to make the home accessible so that everyone can appreciate its beauty.” 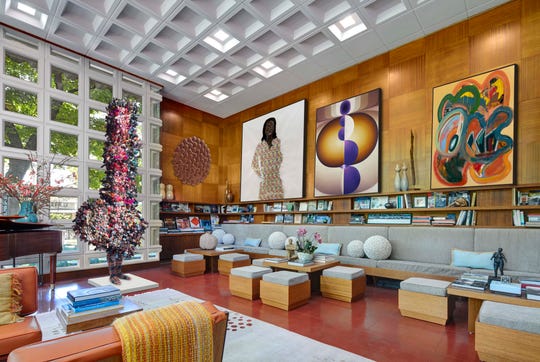 Nick Cave’s Soundsuit, a mixed media piece, stands in the music room of the Dorothy Turkel house in Detroit as part of a virtual art exhibit by the Library Street Collective. (Photo: James Haefner)

Viewers will get a chance to see a range of paintings and sculptures by various artists, several with Detroit ties, including Blair Thurman, Nick Cave and Tony Matelli. Cave and Matelli both attended the Cranbrook Academy of Art.

The images in the virtual exhibit were taken by renowned Michigan photographer James Haefner.

Wright designed 31 houses in Michigan. Several can be toured — or even rented for the night — but others such as the Turkel house are privately owned.

The 4,300 square-foot Turkel house on Seven Mile, named after Dorothy Turkel, the woman who commissioned Wright to build her a home, was built in 1956. An example of Wright’s Usonian style, it has more than 400 windows and 19 exterior doors, even though Turkel told Wright in letters that she wanted no small windows and very few exterior doors.

“This is actually nothing like she envisioned,” Norman Silk, who bought the house in 2006 with his partner, Dale Morgan, told The Detroit News in 2013.

One of the sculptures featured in the virtual SITE exhibit is Cave’s Soundsuit. The 2012 mixed media piece includes sock monkeys, sweaters, pipe cleaners, and a mannequin. Cave is known for his Soundsuits, sculptural forms based on the scale of his body that he created in response to the police beating of Rodney King in 1991.

So far, the response to SITE has been overwhelmingly positive, said Curis. More than 4,000 people have viewed the exhibit so far.

“One of the unique characteristics of the SITE platform is that it reaches beyond any singular audience by including elements of art, architecture, history and the City of Detroit,” said Curis.