SYDNEY — What a difference free admission and a multimillion dollar renovation can make. After decades in the doldrums, the 194-year-old Australian Museum in Sydney — one of the Asia-Pacific region’s oldest Western-style museums — is humming with visitors, drawn by the lure of its new look and a blockbuster […]

SYDNEY — What a difference free admission and a multimillion dollar renovation can make. After decades in the doldrums, the 194-year-old Australian Museum in Sydney — one of the Asia-Pacific region’s oldest Western-style museums — is humming with visitors, drawn by the lure of its new look and a blockbuster dinosaur exhibition, “The Tyrannosaurs — Meet the Family.”

More than 230,000 visitors have poured through the doors of the museum since it reopened after a 15-month revamp on Nov. 28, double the rate before it closed. Museum Director Kim McKay calls it an “extraordinary” response in the middle of the pandemic, particularly given that the 30% of visitors who normally come from overseas have vanished because of pandemic-related immigration restrictions.

“I am overwhelmed at the local reaction,” McKay told Nikkei Asia. “We have had no overseas visitors this year, so that means our local audience is up more than 360% on the figure for 2019.” McKay is keen to see Japanese tourists and other overseas visitors return, most likely from 2022 onward if all goes well with international flights. Japan is one of the museum’s top five source countries, along with China, the U.K., the U.S. and New Zealand.

Visitors to the refurbished museum see a comprehensive array of natural science artifacts and history — dinosaur tracks found in an Outback salt pan, the opalized skeleton of Eric the pliosaur (a carnivorous marine reptile that lived 100 million years ago), a depiction of a Tyrannosaurus rex autopsy, a preserved Tasmanian tiger pup, recreations of other animals past and present, and a Sydney funnel web spider whose bite killed a child.

Significant parts of the collection include the stories, tools, weapons and cultural objects of the Aboriginal people whose custodianship of the Australian continent preceded the British colonizers who arrived in 1788. On two levels of the museum’s historic Long Gallery are the “treasures” of the nation — 100 people and 100 objects that have shaped the modern story of Australia, while the adjacent First Nations galleries celebrate the 65,000 years of Aboriginal history in Australia. Established in 1827, the Australian Museum is the oldest Western-style museum in the country — and the second-oldest in the Asia-Pacific region, behind the Indian Museum in Kolkata, founded in 1814. Since the mid-19th century it has had a prime location at 1, William Street, just across the road from Hyde Park, in the center of the city, but years of neglect rendered it the ugly duckling of Sydney’s grand cultural and natural attractions. Visitor numbers were way behind the Opera House, the Royal Botanic Garden, the Art Gallery of New South Wales and the Museum of Contemporary Art.

While the museum’s collection of 22 million specimens and objects is one of the largest in the world, generations of schoolchildren on compulsory excursions knew it mainly for its fusty interior, archaic display cabinets and lack of hands-on experiences. Its sandstone blocks gave it a handsome external appearance, but the big letdown was inside.

The long-overdue refresh has enabled it to open an extra 3,000 sq. meters of public space, education rooms, a rooftop restaurant and much-improved access ways. A new entrance into a grand central exhibition hall highlights the building’s sandstone origins, while a special basement area showcases the big touring shows that help bring in the crowds. 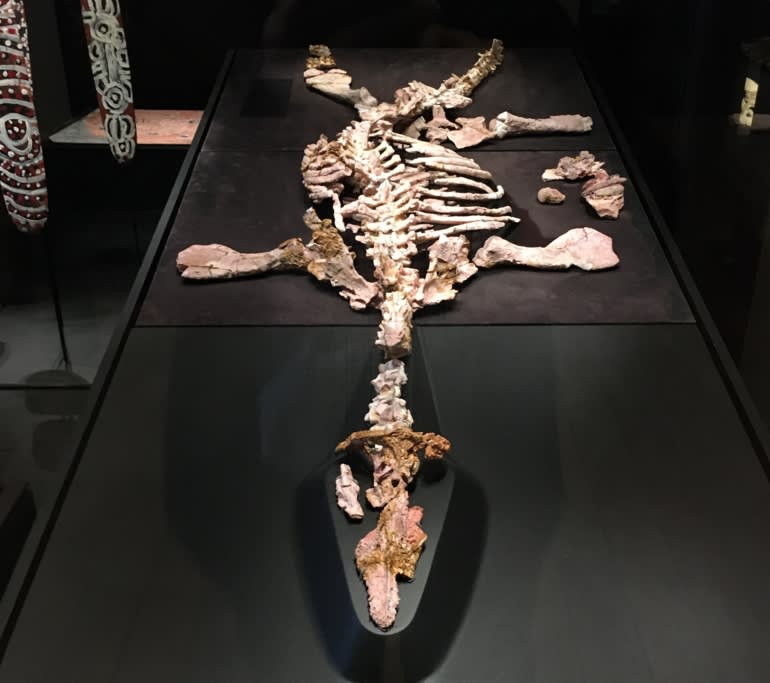 Top: A depiction of how an autopsy on a T. rex might be carried out. Bottom: “Eric,” the opalized pliosaur from 100 million years ago, was found at Lightning Ridge, Australia’s black opal heartland. (Photos by Geoff Hiscock)

Three years ago, McKay won a funding commitment of 50 million Australian dollars ($45.57 million) from Gladys Berejiklian, premier of the state of New South Wales, which was topped up with a further AU$7.5 million raised by the museum. The timing of its reopening coincided with COVID-19, but the museum’s sharp rise in visitor numbers has run counter to the global pattern.

The Louvre Museum in Paris, for example, has been shut for six of the past 12 months, with visitor numbers in 2020 plunging from an annual rate of 10 million to about 2.7 million. McKay says the Louvre’s staff are using the downtime to do essential maintenance and much-needed restoration work.

“From talking to my overseas colleagues, the experience in the U.S. and Europe has been very flat,” McKay, who was appointed CEO in 2014, said. “It’s been difficult for most museums and galleries this past year. The ones that have done well are those, like us, which have done major rebuilds, such as the Auckland Museum in New Zealand and the Western Australian Museum in Perth.” A figure from a Torres Strait Islands story, Garom the honeycomb cod, made in 2013 by Erub Arts from net, plastic, metal and rope. (Photo by Geoff Hiscock)

“So it is a challenging time for all the cultural institutions. Everyone is anxious to reopen, and in the meantime they are turning to online communication.”

McKay said free admission was an important element in the Australian Museum’s rise in visitor numbers. “It removes the entry barriers for families and marks the true democratization of one of Sydney’s great cultural spaces,” she said. Two other key factors are the renovation, and having a blockbuster exhibition to mark the restart. Nicknamed “The Bone Ranger,” this 1870 combination shows the skeletons of a champion stallion, Sir Hercules, and an unknown rider. (Photo by Geoff Hiscock)

“When people go to a museum today, they want everything — the food, the shop, the amenities, the space and of course, the exhibitions, all have to be great,” McKay added.

The “Tyrannosaurs — Meet the Family” exhibition (which has a special entry fee) ends on March 14. It will be followed in May by what McKay believes may be the Australian Museum’s most important blockbuster exhibition yet — “Unsettled,” which is about truth-telling from a First Nations perspective. McKay says “Unsettled” will be a confronting, moving and thought-provoking story of dispossession. “Because it is so important, we have taken the decision to make it a free blockbuster exhibition,” she said.

The success of the Australian Museum’s free admission policy and its face-lift is just the start of what McKay hopes to achieve in developing new galleries that will attract more visitors and new donors. She says her preference is to continue free admission at the museum past its June 30 review date, but that will depend on financing. Indigenous artwork from the Cape York area shows, left, a sorcerer atop a saltwater crocodile, and right, a spirit man, the ghost of someone taken by a crocodile. (Photo by Geoff Hiscock)

“I have my fingers crossed that with the money we get from the New South Wales state government budget plus funds from the food, shop and blockbuster exhibitions, we can do that,” she said.

Various donations, bequests and the museum’s internal capital spending program will fund about AU$15 million of works over the next couple of years to open two new galleries covering minerals and the Pacific region, plus a children’s discovery center. A planned Egyptian gallery depends on finding a donor. In the longer term, the museum has a masterplan to expand into a site adjoining the existing premises, to make it an even more significant contributor to Sydney’s cultural life.

“I am hoping we can have that expansion built by 2027, in time for the museum’s 200th anniversary,” McKay said.